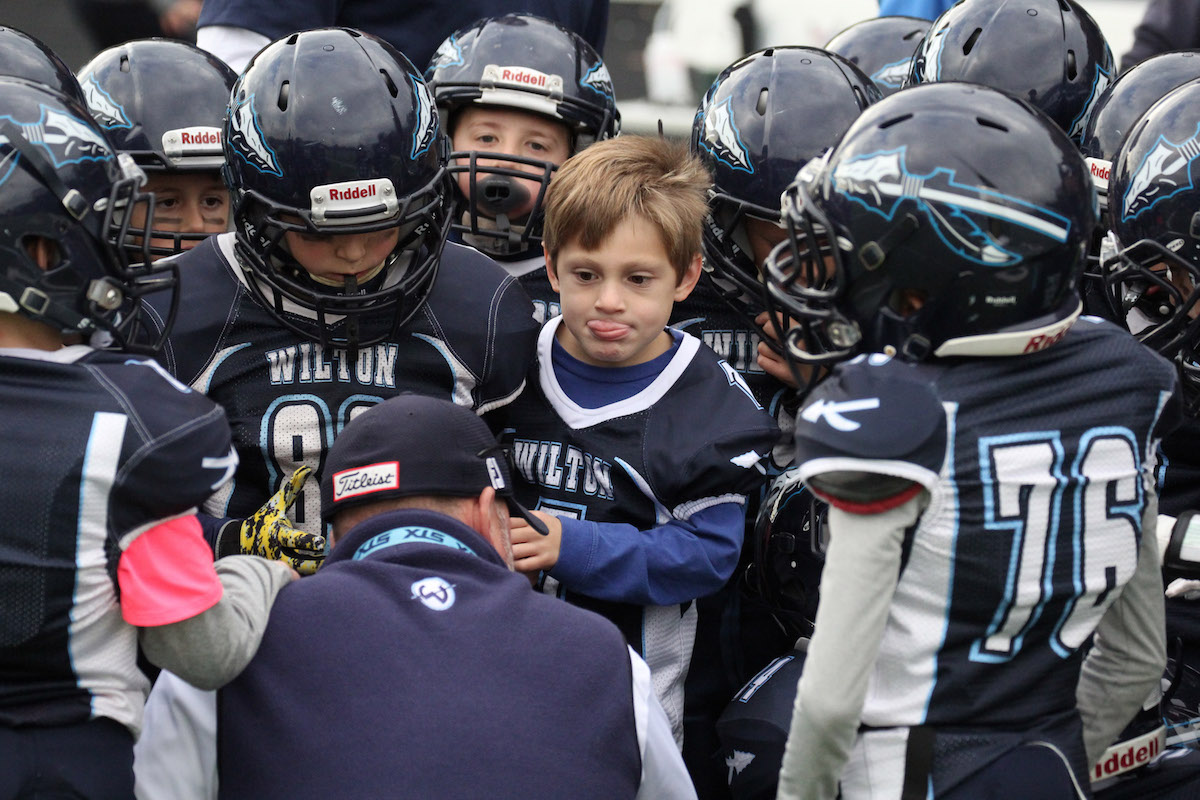 Wilton’s 3rd Grade Football Team may have lost their FCFL League Championship game this past Saturday, Nov. 12, but they’re champions in the League of Life. And it all has to do with how they made sure their classmate, a young 9-year-old boy, was included as one of their own.

He’s also someone who has overcome and continues to triumph over the physical challenge of cerebral palsy caused when he suffered a stroke before he was born. Patch and his parents have worked to raise awareness about pediatric strokes through advocacy and publicity.

Because of some of his physical constraints, Patch isn’t able to play a sport as physically demanding and potentially injurious as football. But even though he can’t play, Patch is amazingly close with many of the kids on the team, who embrace him for who he is.

“It’s his people. He’s good buddies with several of the boys on the team,” Jennifer says.

But with two older siblings, busy parents and his own activities, Patch hadn’t been able to get to a game all season to watch his friends, until later in the afternoon of the Wilton High School homecoming game. Jennifer was at the field at the end of the high school game.

“The big kids are coming off the field and out come these little bobbleheads, that’s what they look like,” she laughs. “I said, ‘Those are the 3rd graders? I’m going to get Patch.'”

She drove home across town to pick him up and go back to the field. “By the time we got there it was fourth quarter. He was so excited to see his friends play. But that was it, we were just sitting in the stands, watching and hollering, sitting next to his friend Jake‘s mom, Amy Padilla, and [family friend] Patty Tomasetti. He was chanting and cheering, and when the game was over we went down to the track to say, ‘Hi’ to his friends. I expected just a wave, but all of a sudden a dozen boys circle around him and pat him on the back, saying, ‘Patchie! Thanks for coming!’ It was truly the sweetest thing to see this group of boys. The next day Patty kept texting me, ‘How do we get him on the team? He needs to be on the field!’ Even though I said he can’t play, she was like, ‘I’m going to figure something out.'”

Tomasetti reached out to the powers that be, including Chris Calabrese, the team’s coach and a friend of the Angerame family. Calabrese immediately told Tomasetti, “Have Patch come to the field next week, I’ve got a jersey.”

Jennifer told Patch only that the following week they’d be going to the game for the 3rd graders first post-season game; she mentioned nothing about what was planned.

“We got there a little early, walked onto the track at the field, and Coach Chris called him over. Out comes the jersey. Patch actually turned around to me and said, ‘See, I told you I was going to be on the team!'” Jennifer recounts laughing, reflecting how his friends had promised they would get him on the team.

That, she explains, is completely reflective of her son’s personality as well how the kids at school flock to him. Outgoing and confident, Patch draws kids and adults alike to him like a magnet. He’s something akin to the mayor of his house section at Cider Mill School, where kids from every grade know him and greet him with fist bumps and hellos everywhere he goes.

Not only did he get to dress for the game in the jersey, Patch spent the game on the sidelines, took a knee with the rest of the team when an opposing player was injured, and he ran through the banner with the entire team to take the field at the game’s start.

What’s more, one of the other team parents had a traditional post-season pillowcase banner made for Patch and placed at the Angerame home for Patch to find when he got off the school bus, just like all the other players.

Jennifer says she has been bowled over by this entire experience.

“It was just absolutely the coolest gesture. They completely embraced him, made him part of the team, no questions asked. It was just awesome,” she says emotionally.

They have talked about Patch being part of the team again next year, with the family tossing around the idea of him being the team’s ‘manager.’ “He told somebody the other day he was the team manager, although today he did think he was going to play the D-line,” Jennifer laughs. “Jake probably said, ‘Yeah, you can play the D-line!'”

She knows how much it means to everyone that the boys see Patch as being able to do anything he sets his sights on.