Home Community Off the Beat, Wilton Police Help the Community with Food and Heart... 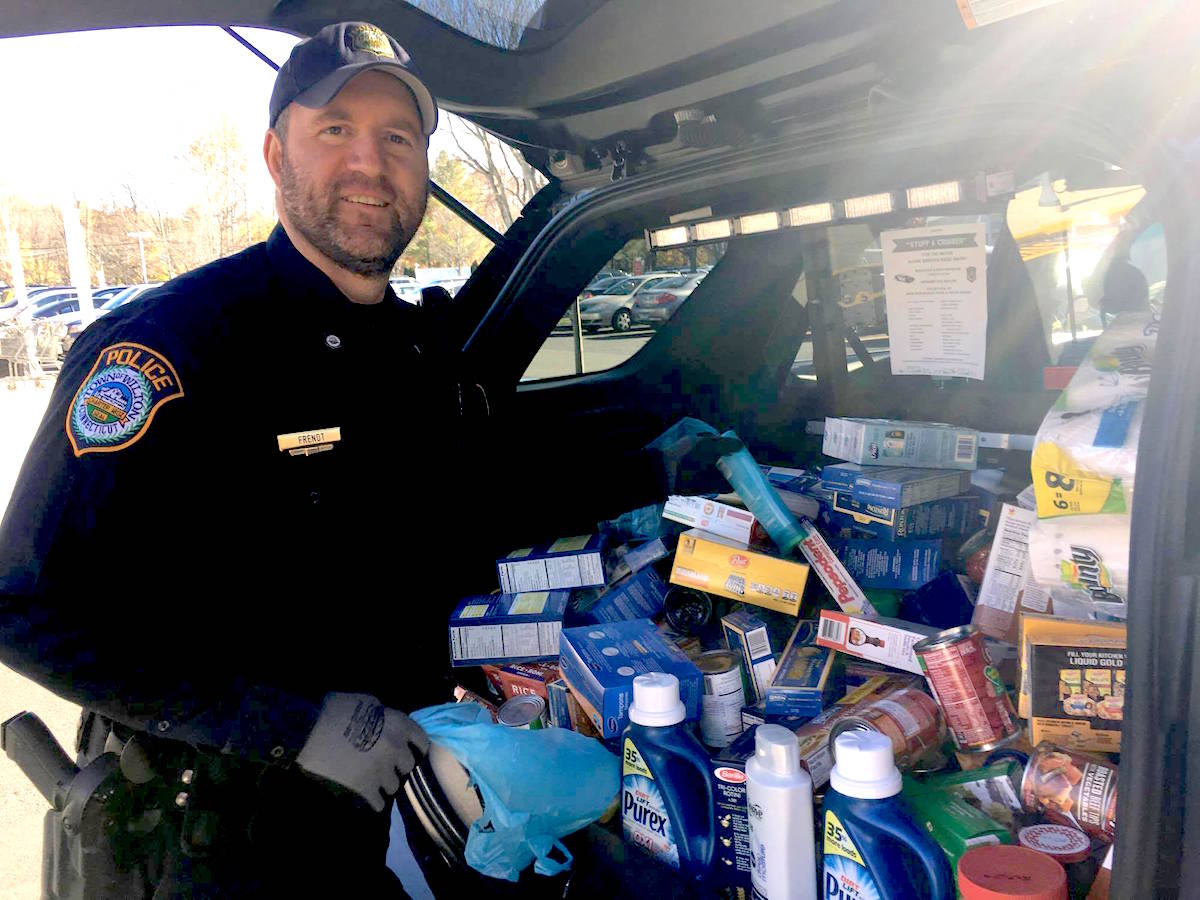 Wilton Police are dedicated to the town, patrolling our streets and keeping the community safe around the clock. This past week there were two events organized by Wilton’s Finest that were meant to help the community in different ways, while the officers were off duty.

On Saturday, Nov. 12, several officers manned a “Stuff a Cruiser” Food Drive on behalf of the Wilton Food Pantry. Two nights before, on Thursday, Nov. 10, Wilton Officers held a Tip-a-Cop fundraiser for the Special Olympics.

For the Saturday food drive, several off-duty members of Wilton’s police force stationed themselves outside Wilton’s Stop & Shop from 10 a.m.-2 p.m., asking shoppers to donate non-perishable food, personal care items and household supplies. Their goal was to fill one of their police cars with much-needed items and help stock the shelves of the food pantry.

The officers asked and Wilton answered the call, filling not just one police car, but four cruisers altogether.

Ofc. Shawn Frendt was instrumental in making the Stuff a Cruiser Food Drive come together after last year’s very successful Stuff a Cruiser Holiday Toy Drive (part of the Department’s ongoing Toys for Tots participation). He says it’s just one more way the police give back.

“We have a real good group of people at the Wilton Police Department. It’s just another way of serving our community,” he says. In fact, the officers are dedicated to taking care of Wilton and see it as ‘theirs,’–even those officers who live in other towns.

According to Farah Masani, a Wilton resident who helped organize the effort alongside the police officers, the support from fellow Wiltonians was tremendous.

“It was a festive atmosphere, with people coming together as a community to help our own community,” she said.

Frendt agrees. “It’s amazing to see the support we get when we host these kinds of events. Wilton is a great community for this,” he says. “Really, thank you Wilton, because what happened today would not have happened without the generosity and support of the community.”

One of the reasons the department likes to do these types of events is because they typically draw out families with children, which is a good way to interact with them and get them to know the role the police play in Wilton. “It’s great to see the families and young kids come out. It’s positive community relations.”

He adds that quite often, people only interact with police officers on less-than-positive terms, and events like these help put officers in a better light. “Maybe something went wrong, maybe they got pulled over, so it’s an experience to see a cop in a different way.”

The same effort was at work Thursday evening, when half-a-dozen officers donated their off-duty time for a Tip-a-Cop event, working as servers at Cactus Rose and donating tips they collected to the Special Olympics. This year they raised $3,300 for the cause–$500 more than last year and $1,500 more than the year before.

The officers give willingly of their time, even though they’re off the clock and volunteering themselves. And they work hard, doing much more than just filling water glasses and collecting money–they were taking orders, bussing tables, bringing out meals and really busting their butts for the effort.

“It’s always a fun time,” Frendt said, “We’re not getting any compensation, we’re there supporting a fantastic cause as well as a local restaurant. It’s worth it for the cause and to help a family owned local business in town. And most importantly, it allows us to talk to people. It makes all the difference.”

Wilton residents will see more events like these, including the upcoming return of the Stuff a Cruiser-Toys for Tots event. GOOD Morning Wilton will publish details as soon as the event timing gets confirmed.