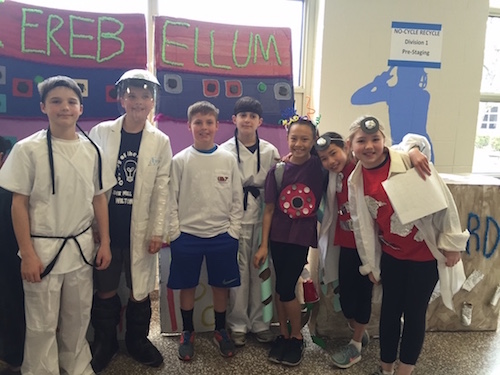 For the first time, Cider Mill students participated in an extracurricular enrichment competition called “Odyssey of the Mind,” a fun, educational program that encourages creative problem-solving through teamwork and ingenuity. Sponsored by the Cider Mill PTA, Wilton furnished six teams involving close to 40 students from 3rd-5th grades, and they entered the Connecticut State Odyssey of the Mind Tournament. For first time participants, the Wilton students did amazingly, with two teams placing 4th and one team placing 5th.

PTA president Nicola Davies learned about Odyssey of the Mind after talking about enrichment opportunities for Cider Mill students with the school’s administrators. She discovered that many neighboring towns participate, and that the program is something that gives kids out-of-the-classroom experience to stretch and exercise skills including problem identification, creative thinking and group communication.

Through Facebook, Davies connected with Jennifer Noonan, a new Wilton resident and parent who not only had been involved in Odyssey of the Mind in Stamford for four years, she also participated in it herself as a child. Through PTA sponsorship of the program, they began to recruit student participants and volunteer parent coaches. It was clear that many parents were enthusiastic; after just one evening parent information session, six parents volunteered to coach, something Davies says, “was beyond my wildest expectations.”

One of the critical elements of Odyssey of the Mind is that it is truly student driven. The kids are responsible for coming up with every part of their presentation—script, songs, back drops, vehicles, structures, anything. The judging process is rigorous and the kids have to be able to explain where their ideas came from. Parent involvement is considered outside assistance and it is absolutely not allowed.

The tasks are designed to promotes teamwork and creativity. The teams started work in October, with each team choosing one five pre-published long term problems to tackle. For this part, the process is as important as the final presentation. In addition to the long term problem, each team also has to face a spontaneous problem that they receive on competition day; this type of problem could be anything ranging from word problems that need creative answers, or a structure that needs to be built out of a disparate bunch of random objects. The point in this exercise is to think on your feet and be creative.

According to Davies, getting involved in Odyssey of the Mind was well worth all the effort. “The kids all loved it. I think they are all highly motivated and have learned so much from attending the state competition they all can’t wait to pick a new problem in October and do the whole thing all over again.”

While there are different divisions for every age group from Miller-Driscoll up through High School, Cider Mill was the only school from which Wilton students entered. The top two teams for each problem advance to the international competition in May. For now, Wilton teams will have to be content looking forward to starting preparation for the state level next October, as they didn’t make the cutoff for the “Worlds.”

Davies hopes the kids’ enthusiasm will carry forward to Middlebrook when the 5th graders age up. She’s also putting out a call for any parents who are interested in getting involved too. The program relies on volunteer coaches to meet with their team at least once a week from October until competition day. Any parent interested in learning more about becoming a coach can email her.