Home Community Climbing From “I Can’t” to “I CAN Do It!” 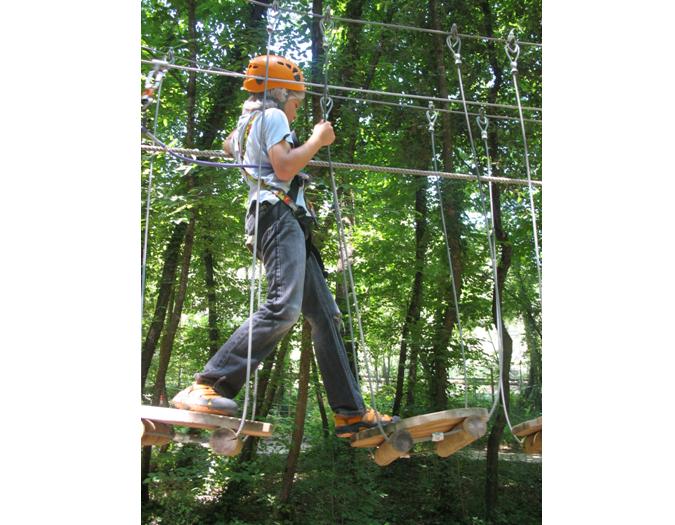 There’s a revolutionary program in place at Middlebrook School that helps students challenge themselves to overcome their fears, work together and become more self-confident, and it doesn’t involve cracking open one textbook at all.

Project Adventure is a unit the students at the school do during Phys Ed, involving ropes, climbing apparatus and high platforms. There are actually two courses at Middlebrook – one outdoors built amongst the trees, and one indoors in the gym. All three grades (6th-8th) participate during the year, climbing outdoors in either fall or spring, and everyone climbing indoors during the winter.

The program developed out of Outward Bound in the 1970s. Middlebrook was one of the first schools in Connecticut to implement the program, installing their courses in 1994. Since then it’s been an amazing success, as a program the kids love to take part in and as something the teachers say has a huge impact.

“We really look forward to coming to work and sharing this experience with the kids. Some kids just go right up there and they’re fearless, but we have a lot of kids who have never done anything like this, and we have to bring them up to speed right from day one. It’s not all about the high climbing, we do low activities and group work and things where you have to work together as a group with trust building activities and you have to communicate your ideas,” said Dr. Jim Longcoy, P.E. instructional leader at Middlebrook. “They’re overcoming risk, whether that’s real risk or perceived risk. But challenging the kids to overcome their fears and try to do whatever the goal is, they realize that they maybe can do more than they thought they could. And they grow in ability and self-confidence almost instantly.”

Longcoy, who got his doctorate at Columbia and wrote his dissertation on the program, said there are two things about the Middlebrook program that sets it apart from any other adventure education program.

“We really listened about what the students had to say about the elements and the activities, and that actually shaped the way we designed our course. We incorporated a lot of different high elements and activities, based upon their experiences. We allowed the students to help shape this curriculum,” he said.

The other unique thing about the Middlebrook program is the involvement of parent volunteers.  Every year, 15-20 parents get trained in how to belay the student climbers. “They come into our classroom on a daily basis, working with the kids and they help belay, they help the kids get through their fears, they’re an irreplaceable part of the program. We would not have been able to accomplish what we have through the year without them. Right from day one in 1994 that parents stepped up to get trained and form a parent organization to keep it rolling, and it’s been beautiful. I don’t know of another school that does what we do. It’s really a community thing,” Longcoy explained.

Wilton parent Laurie Jones, who coordinates the parent volunteers along with Kate Filaski, got involved when her now high-school-senior daughter was in 6th grade.

“There are so many volunteer opportunities, but as they get older, there aren’t as many times where you can actually be with the kids. When my oldest was going to middle school I wanted that opportunity to check everything out. A lot of people love it because they’re with the kids, and they feel very rewarded because it’s something more than administrative.”

She described the responsibilities of being “on belay,” helping the students as safety backup while they’re climbing as well as helping encourage them along the ropes course. But to her, it doesn’t feel like a chore, but rather is something she loves to do.

“One of the only other activities you have contact with kids is a field trip—and you’re there saying, ‘Stay with us, don’t go too far away, stop doing that.’ You’re being a ‘mom,’” she laughed. “But when you do Project Adventure, you’re not in charge of saying, ‘Don’t do that, don’t do that.’ To be able to say, ‘You can do it, you can do it!’ it’s so encouraging—‘can you go one more step? Just try one more, I’ve got you!’ It is so much fun.”

The reward, she said, comes from seeing a transformation in the kids as they challenge themselves, and helping them be able to accomplish something so meaningful, all while having fun.

“I cannot tell you the number of kids who, maybe they get two steps off the ladder and they have to come down, they’re so scared. But they say, ‘I’ve never gotten off the ladder before!’ And they’ll have this huge smile and they’re so excited! I’ve had eighth graders who’ve done something and said, ‘For three years I’ve been trying to do this and I’ve never been able to get all the way across and I was determined to do it this year before I left,’ and they come down with this elation. It’s really so wonderful, and the kids are so polite and thankful, and have fun,” Jones said, adding with a laugh, “It’s all the positive stuff that with teenagers we don’t always get.”

Parent volunteers first have to go through training, and that’s usually done at Carabiner’s Indoor Climbing in Fairfield. Then, after an orientation with the parent coordinators and P.E. teachers, they learn the course at Middlebrook. “The parents will belay parents so they get to see how challenging the different courses are, and then they can sign up for times based on their schedule.”

Volunteering is rolling–people can sign up whenever they’re interested, Jones confirmed. “We’re not climbing again until February, so they have plenty of time to get trained, and people can jump in whenever they want to jump in, anytime in the year.” Nor is it necessary to be a parent of a current Middlebrook student, or to have any prior climbing experience. “We teach them everything and do an orientation on our equipment, so parents are very comfortable.”

You do need to be active and in good health to participate, but you don’t need to be an athlete or phenomenally strong. “We have really petite, 115-pound women, doing this, regular-sized adults—you don’t have to be any size or shape,” Jones said. “It’s really fun. The other thing that’s attractive, you can sign up any amount of time, whatever is convenient and it’s very easy to individualize.

Parents who are interested in volunteering can get in touch with Laurie Jones (laurierjon@optonline.net) or Kate Filaski (katefilaski@gmail.com).