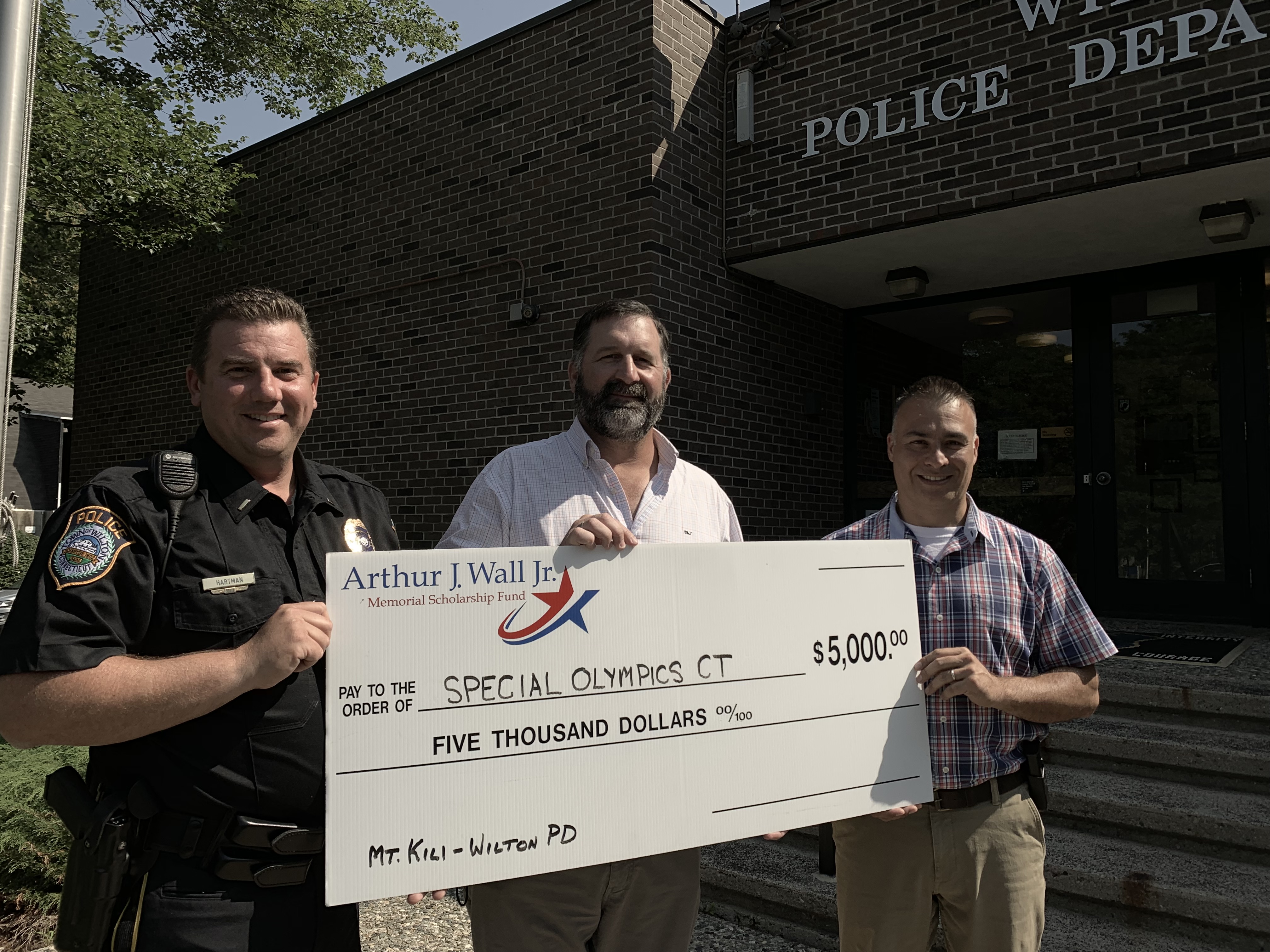 Two Wilton Police officers don’t start climbing Africa’s Mt. Kilimanjaro until February 2020, but they’re already close to the summit, thanks to a donation they got Monday from a local foundation.

The Wilton-based Arthur J. Wall Foundation presented a $5,000 check to Lt. Dave Hartman and Lt. Robert Kluk of the Wilton Police Department yesterday, to support the officers’ fundraising climb to benefit Special Olympics of Connecticut. The two will be attempting to reach the top of Africa’s tallest mountain next February with a group of CT law enforcement officers to raise awareness and funds on behalf of Special Olympics.

The donation from the Wall Foundation puts the officers over the minimum of what they needed to raise to be part of the African expedition and climb. It also puts Hartman and Kluk at the top of the fundraising teams for this effort.

Supporting the officers who are climbing for Special Olympics was a natural fit for the Wall Foundation, which also annually awards scholarships to two Wilton High School graduates.

“To me it’s a nice tie in,” says Kevin Wall, Arthur’s son. “In the past, a couple of our scholarship winners have worked with special needs kids, at the Wilton Family YMCA and their Special Olympics programs.” He adds that he the foundation to help benefit the larger area. “This certainly fit the bill.”

Wall, who grew up in Wilton, has a special connection to Hartman, who also lived in Wilton when he was younger. He says he loves supporting the work that the police officers do. “To me it’s a great partnership, and it gets them some good press. These guys do a good job and it’s nice to show some good stuff as well.”

This $5,000 donation from the Wall Foundation makes Hartman and Kluk the leading fundraisers out of the group of law enforcement officers who will be attempting to “conquer Mt. Kili” in February.

“This has always been a friendly competition among the law enforcement agencies participating, to see who can raise the most. This by far puts us up over the other agencies. We now have bragging rights, both of us having met the minimum now,” Hartman says. “We were really blown away when Kevin told us how the foundation would be supporting us,” he adds. “We really appreciate it.”

The duo is still fundraising, of course, and they don’t want to stop at ‘just’ the minimum of raising $10,000 apiece to participate.

“It’s great having the support of the community,” says Kluk. “We still have a bunch of months to go, so we definitely want to raise that [amount] up.”

Community members can continue to donate online toward Kluk and Hartman.

How Ukraine War May Impact New Police HQ, Pedestrian Bridge and Other Projects