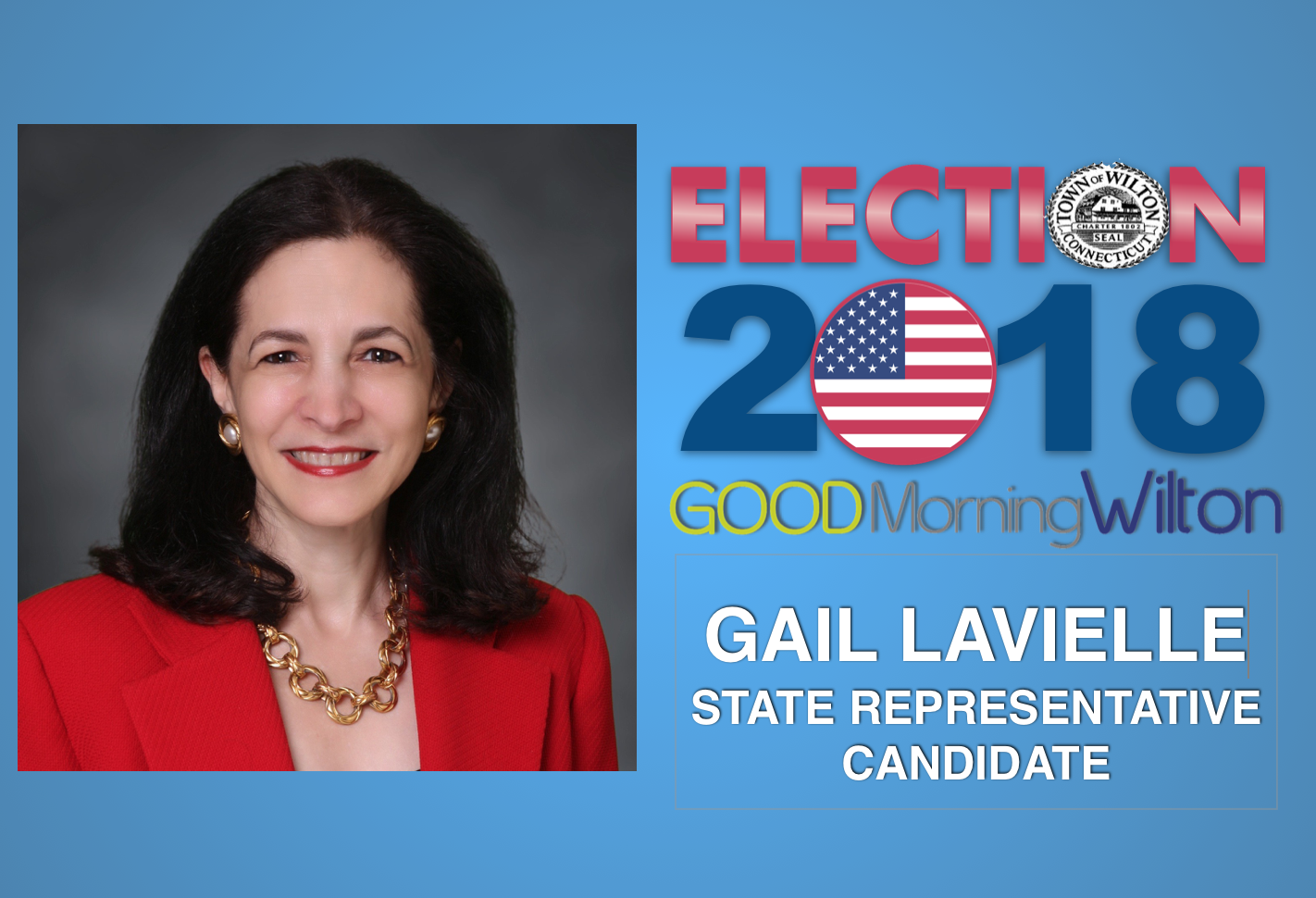 As part of GOOD Morning Wilton‘s coverage of the elections on Nov. 6, and of the campaigns leading up to that day, we have set out some guidelines. Candidates are invited to submit one 800-word op-ed piece before the elections. Gail Lavielle is the Republican candidate running for re-election as State Representative.

I want to thank the residents of the 143rd district for their active participation in our representative government.

Everything I do as your representative starts with you. My job is, and always has been, to represent you. Not a party. Not an ideology. You.

I’m grateful that so many of you take the time to discuss with me what really matters to you.

The concern I hear most often from people of all ages is the fear that neither they nor their families can have a future in Connecticut. You’re worried about declining home values, our sluggish economy, and our overall tax burden. Often you tell me you’re considering leaving the state. I take this seriously, because many of our neighbors have made that choice, and Connecticut’s population has been shrinking for the past three years.

Addressing these issues has remained my priority. Every year, I’ve helped craft budgets that funded essential services without tax increases. Because the legislative majority wouldn’t consider them, progress during my first years in the House was difficult. Recently, however, as the partisan balance in the legislature has attained virtual parity, progress has become possible. Last year, we passed a bipartisan budget that included tax relief, structural budget reforms, funding for seniors and people with intellectual disabilities, and sustained education funding.

But it’s not enough.

For Connecticut to recover, we must reduce taxes on people and small businesses, reduce spending, improve the business climate, and make critical investments, all at the same time — not overnight, but purposefully, on a continuous basis, starting now.

I’ve been a leading advocate for protecting dedicated transportation funds, bonding for Metro-North upgrades, and improving commuter service, like restoring through-trains on the Danbury Line and reopening the Wilton station. I stopped expansion of the state’s powers to use transit-related eminent domain without town approval, and helped stop rail fare hikes and service cuts by reallocating existing revenues.You’ve asked me to protect our schools from state interference and surprise funding cuts. As Education Committee Ranking Member, I authored the first comprehensive education mandate relief bill passed in years, prevented the transfer of teacher pension costs to towns, and made the state education funding formula more predictable.

I’ve responded to your concerns about gun safety legislation with unwavering support that has helped make Connecticut’s laws among the country’s strongest. I voted to ban bump stocks and to require people subject to temporary restraining orders to surrender their firearms, and voted for the landmark 2013 bill addressing gun safety, mental health, and school security. We still have much more work to do.

Many of you are concerned about protections for healthcare and reproductive rights. My support for the individual right to make personal reproductive decisions is absolute. I recently co-sponsored and strongly advocated for an important bill that protects personal health and reproductive options. It guarantees insurance coverage, regardless of federal actions, for 10 essential health benefits, including contraception, for women and families.

The work I’ve done based on your priorities has led to several endorsements and recognitions.

One of Connecticut’s most cherished values is respect for the individual – regardless of background, economic circumstances, or lifestyle – and I’m proud to represent people who feel so strongly about this. In areas like education, gun safety, protection for personal choices, and human rights, the legislature has supported this fundamental principle, and I’m always pleased to play an active role.

But restoring Connecticut’s economy is also a matter of respect for the individual, and here the legislature has not delivered. I am determined to change that, on your behalf.

Playing politics is not the way forward. We can succeed only if all legislators rise above politics and put your interests before special interests. We must focus on working together to make sure that everyone can count on a future in Connecticut. It’s a question of respect – for you.

State Rep. Gail Lavielle, who serves as Assistant House Minority Leader, represents the 143rd district, which includes parts of Wilton, Norwalk, and Westport. She is Ranking Member of the General Assembly’s Education Committee and a member of the Finance, Revenue, and Bonding Committee and the Transportation Committee. She is a candidate for reelection.