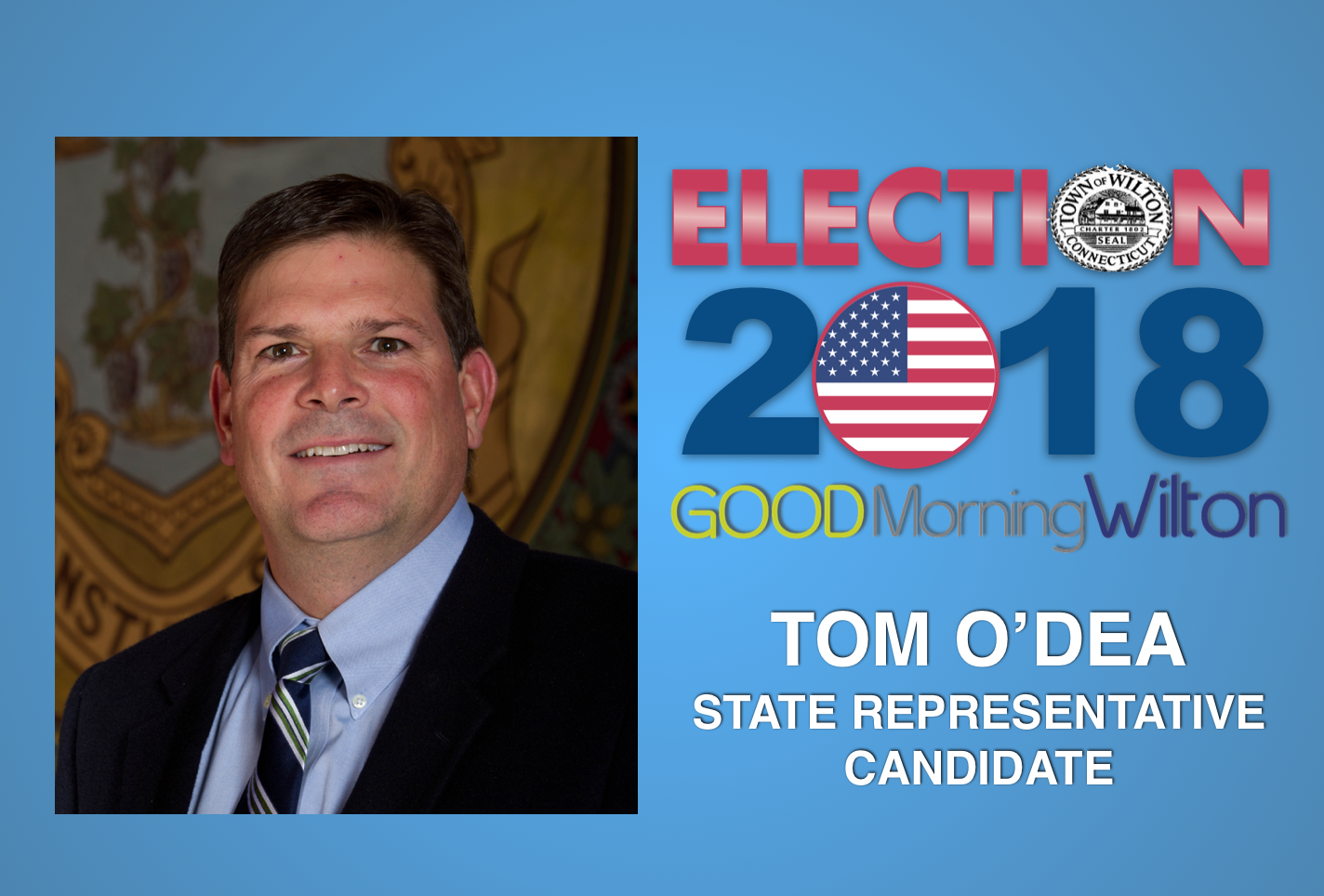 As part of GOOD Morning Wilton‘s coverage of the elections on Nov. 6, and of the campaigns leading up to that day, we have set out some guidelines. Candidates are invited to submit one 800-word op-ed piece before the elections. Tom O’Dea is the Republican candidate running for re-election as State Representative in District 125.

Being your State Representative has been the most rewarding job of my career. I’m truly honored and humbled to be working for all of you. This past session, because of my reputation as a bipartisan legislator, I was promoted to Deputy Leader At Large, the first such leader from this District.

I’m running for re-election because, while your Republican Team has made excellent strides, much more needs to be done. As a former elected [New Canaan] Town Council member, former member of the Police Officers Standards and Training Council, former Victims’ Compensation Commissioner, former member of the Judicial Selection Commission, a 27-year trial attorney who has represented dozens of municipalities in litigation and trained newly elected officials throughout the state in governance, sexual harassment, and FOI, I’m uniquely qualified to be your Representative.

If re-elected, my priorities will continue to be to reducing state spending and taxes, increasing private sector jobs and improving transportation.

Eliminating those taxes will cost the state roughly $500 million but will stabilize the real estate market by making Connecticut one of the best places to retire. I will also push to have the AG more aggressively pursue fraud and wasteful spending by better utilizing the agency audit reports.

We also need to negotiate with the public unions for concessions in exchange for putting all the savings into underfunded pensions. Unfortunately, the current Governor extended the SEBAC agreement until 2027, providing raises and a no-layoff policy.

In addition to reducing spending and taxes, in order to increase private sector job growth, we need to cut regulations, streamline licensing and reform the unemployment and workers’ compensation laws. Companies are leaving the state because our business environment is toxic. Democrats have controlled the legislature for 22 years. Since 1990, Connecticut has added the fewest jobs in the country. Our economy is actually smaller than it was in 2004 and our Gross State Product is down 7.9% since 2007. During that time, we’ve also had the lowest personal income growth in the country. When comparing our tax structure to other states, we are ranked as one of the highest taxed states in the country. Our corporate income tax is ranked 33rd, sales tax 39th, personal income tax 35th, property tax 40th and estate tax 38th. From 2011 to 2014, we lost 44,000 residents and $5 billion in taxable income.

Regarding transportation, I will prioritize funding and support public-private partnerships. Last year, I established a dialogue between the DOT Commissioner and the Boring Company to discuss a tunnel that would reduce the commute from Stamford to Manhattan to 12 minutes, at no expense to the tax payer. The Boring Company is opening a tunnel in LA next month.

Finally, our Republican Team got passed a number of institutional changes including a constitutional spending cap; successfully allocated monies to the Transportation Fund while maintaining current service and fares; got the Transportation lock box on the ballot; and reduced the estate tax to match the federal level in 2020 with the goal of eliminating it completely.

When deciding who to vote for, remember that experience matters and past conduct is an indicator of future conduct. Democrats have controlled the legislature since 1996 and have ignored Republicans until the Senate became tied last session. Please look at each candidate’s life experience, work experience and what they have done in your District to earn your vote. This is not an entry level job! Also look at how each candidate spends your tax dollars on their campaign, online with the SEEC. I have not accepted any state tax dollars (CEP) for my campaigns which has saved taxpayers over $100,000.

Due to the tied Senate, our Republican Team has been able to make a positive difference. If not for Senators Toni Boucher and L. Scott Frantz, some of the additional taxes you’d be paying include taxes on second homes, cell phones, restaurants, tires, increases in gas, sales and income tax along with elimination of millions of dollars in municipal aid. To be clear, if not for Senators Boucher and Frantz, your house would be worth less money, your taxes would be higher and the most strict gun legislation in the country would not have been passed. If you believe passing the first bipartisan budget that made essential structural changes was a good start, please give our Republican Team another term.