On Sunday, Sept. 11, the Wilton Firefighters Local 2233 and the Wilton Fire Department held a memorial service in tribute to the emergency responders and Wilton residents killed in the September 11, 2001 attacks.

Wilton firefighters were joined by fellow emergency personnel from the Wilton Police Department, the Wilton Volunteer Ambulance Corps (WVAC), as well as an honor guard from Wilton’s American Legion Post 96.

Among the residents in the crowd were town officials, candidates currently running for elected office, longtime residents, veterans, and young families.

Led by the new president of the Local 2233 union, Firefighter Gary Mandel, the ceremony was both somber and hopeful. Mandel’s message reminded residents to remember how the tragic events of Sept. 11, 2001 unified Americans and prompted citizens to put aside their differences, and he said Americans of today should do the same.

“We came together, we were there for each other, and we were unified. This day of remembrance brings us together again. We put aside our differences and we are united. The political edges cool, and we are here for each other. My hope is that we can have more days, not extreme tragic days of 9/11, but normal, boring days that bring out the best in us,” he told the assembled crowd.

Mandel spoke about the memorial that sits outside the Fire Department’s front entrance. It bears the names of the five Wilton residents who lost their lives in the attack on the World Trade Center — Edward Fergus, Peter C. Fry, John Henwood, John F. Iskyan and Edward P. York.

Mandel also described how the Wilton Fire Department did not waver in the days following the 9/11 attacks. “In the midst of the uncertainty … continued to do what they always do. They were here, they were present and ready to respond,” he said, and he told of the outpouring of support from town residents “who so generously gave their time and money to make donations of supplies that were dropped off at fire headquarters, and then sent down to ground zero to help with the recovery effort.” including clothing and other necessary items. Mandel made special mention of the department’s retiring administrative assistant, Kathy Horn, who at the time, spent many hours cataloging and boxing up the donated supplies that were sent to New York City.

Sunday’s occasion also allowed Wilton’s firefighters to make an addition to the memorial. Retired Wilton Fire Department Captain Kevin Czarnecki explained to the crowd about a cross made from steel from the World Trade Center that was set onto the stone beneath the memorial plaque.

Following the ceremony at the Wilton Fire Department, residents’ attention turned to focus on the CT United Ride as it cruised through Wilton as part of the motorcycle tribute in memory of those killed on 9-11. 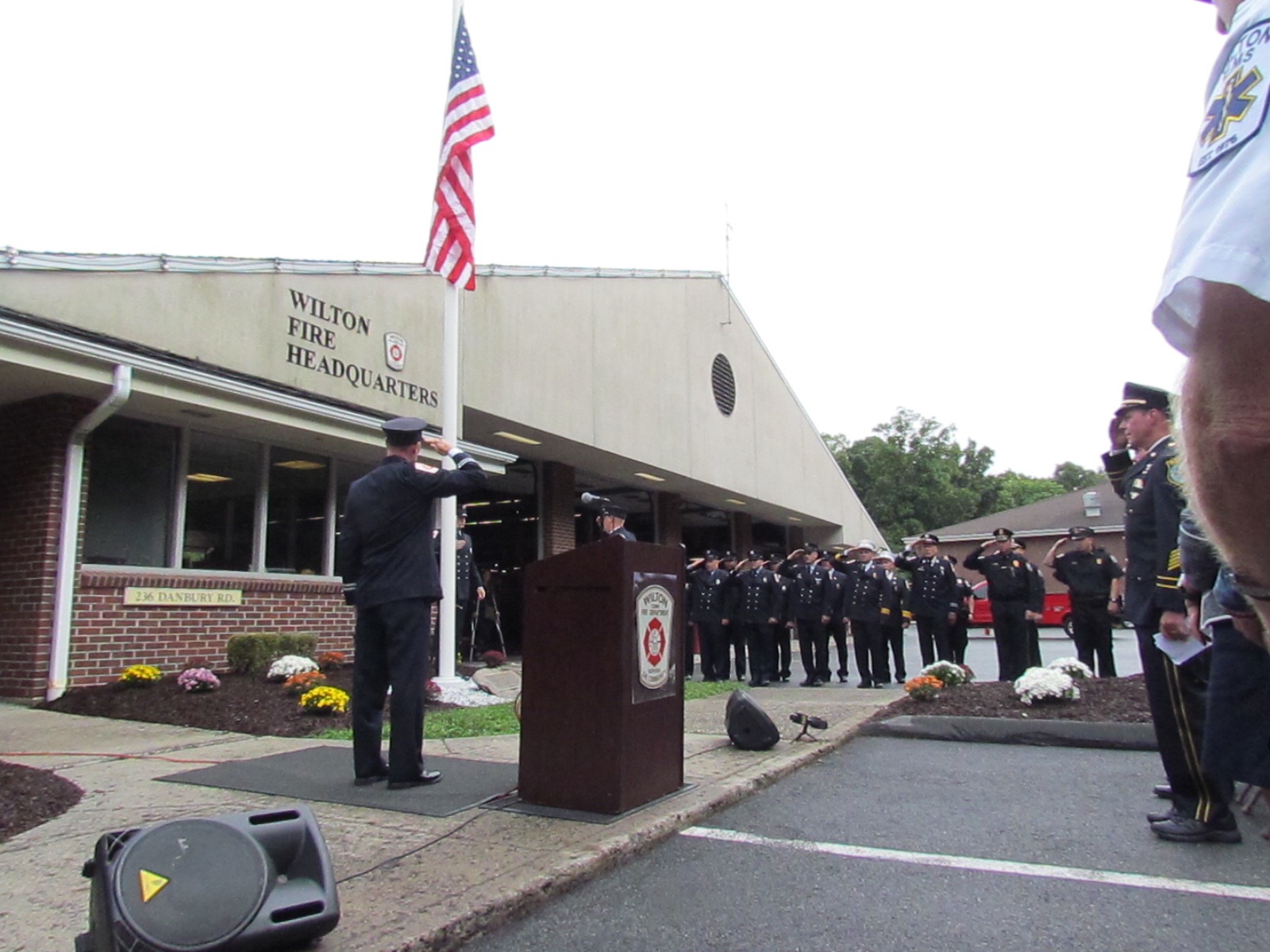