Home Community Gift of the Season: What it Means to Hand Over $125,000 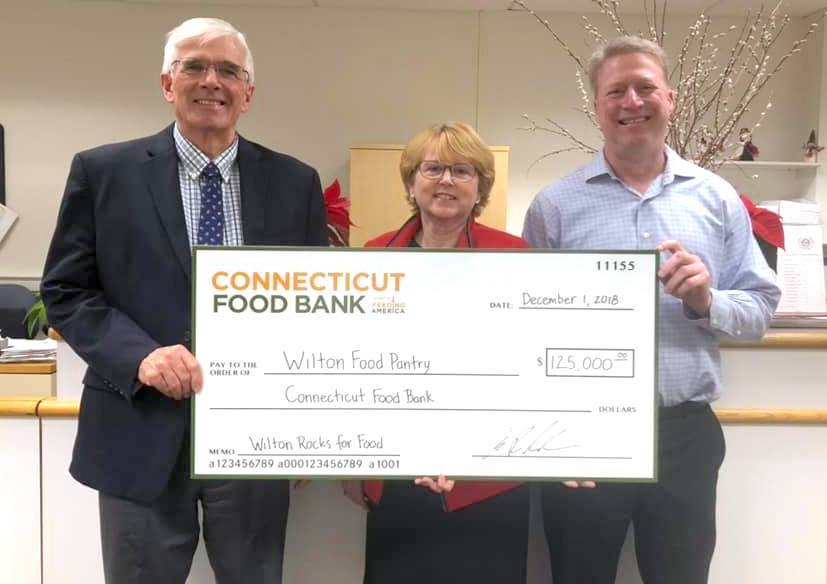 That was one big check presented to two local food pantries, and we’re not talking about the oversized, 2-ft. by 4-ft. piece of poster board on which it was written. This year’s donation to the Wilton Food Pantry and Connecticut Food Bank from Wilton Rocks for Food was $125,000, a significant amount considering the effort is only in its fourth year of fundraising.

The success of Wilton Rocks is undoubtedly due to Schlesinger’s tireless efforts–he coordinates the event’s musicians, logistics, and fundraising. As a member of the Wilton Rocks house band, he’s also onstage playing guitar and singing for the bulk of the evening. In short, he puts on a really GOOD show and throws a really GOOD party, and as a result, the Wilton community does a whole lot of GOOD.

He’s quick to credit the many other people involved–the musicians who play, the sponsors, the silent auction donors, and more–but it wouldn’t happen without his humorous daily Facebook hints asking for donations and serious commitment to the cause in the months before each concert.

“For three months my house is a stream of musicians coming to rehearse. I mean, talk about a labor of love,” he describes.

This year, more than ever before, that labor paid off, with the final tally surpassing all expectations. Schlesinger says the difference was the result of a combination of a few things. First off, there were more and bigger corporate sponsorships and private donors making contributions. Previous supporters like Bankwell and Ed’s Garage Doors grew in support–Bankwell alone gave $10,000, about which he says, “That’s a big number for a little guy like me.” Some of the new sponsors were the Nielsen Foundation, Metroflor, Tito’s Handmade Vodka, Inspira and Edgewater Markets.

Private lead donors, including Jane and Moses Alexander, Chris and Catherine Stroup, Jason Coviello and Paula Smith, and Tamara and Steve Kalin, also grew their support. Schlesinger also increased slightly the number of tickets sold and the silent auction grew significantly. “We had 100 items this year, that raised about $28,000,” he notes.

Of course, the fans and ticket buyers helped put the total take over the top. Watching how many people came together to make it happen is what Schlesinger loves the most–something he says ‘epitomizes the power of community.’ It’s that intangible quality that he feels motivates people to give, to attend the concert, and to be part of the whole effort.

“I think people are just buying into what makes this great–a real community thing. Not just the food, but the musicians coming together, the people at the event, etc. The best thing about this is how much fun it is and that at the same time we are doing so much good,” he says, adding, “What’s satisfying is that literally hundreds of people supported this event. Between donors, silent auction, attendees, I love the fact that people are believing in this. I had no idea this would happen.”

Schlesinger believes a key factor in why people are willing to be so generous is the transparency of where the money goes. “Donors make their checks out directly to the recipient organizations. They know where the money is going. That’s very important, that trust. I also think that sponsor and donors like the fact that 100% of the money raised goes to charity.”

This year’s allocation for the Wilton Food Pantry will likely be between $50,000-55,000. That’s an amount that makes a huge difference for Wilton Social Services. “My goal is to fund their entire cash need for the year,” Schlesinger says, noting it’s above what last year’s need was. “So this should take care of them.”

He adds that as the amount of money Wilton Rocks raises increases each year, the allocation will probably move away from a perfect split between Wilton’s Food Pantry and the CT Food Bank–which helps food pantries around the state, including Wilton’s. Knowing he’s helping feed people who may often go without is something that makes him very happy.

One other lighthearted result from Wilton Rocks that Schlesinger loves is the number of bands that have formed as a result of some of the musicians meeting one another through the event. Among them are Big Deal, Captain Obvious, The Tree Shakers,
Joanie and the Keepers, and more.

All of that, he says, will keep him going back for more every year, including next year’s Wilton Rocks, already scheduled for Dec. 7, 2019. “I get to make music and do some good.”

Sounds very GOOD to us.