Home Business Giving Her All, and More: Christene Freedman, Rotary President and Wilton... 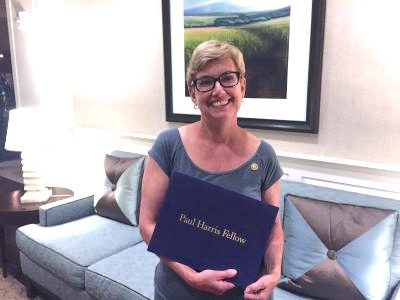 As the Chief Development Officer of the Riverbrook Regional YMCA/Wilton Family YMCA and president of the Wilton Rotary Club it’s both Christene Freedman‘s job and passion to help Wilton. It’s even more remarkable that she’s not even a town resident and yet she gives so much of her time and energy for the benefit of so many in Wilton.

While the president’s term is typically one year, Freedman just began her second year in the role, something she pushed to make happen.

“In light of our club’s many goals and the scope of the international and local projects to which we have committed, I felt that serving one year wasn’t enough. I wanted to be in a position to truly give it my all and I felt two years would enable me to do that,” she says.

As part of her efforts, she just returned from the 2018 Rotary Convention, which was held in Toronto. This was the first time the Wilton Rotary Club sent one of its members to the international convention.

Over four days at the end of June, Freedmen and 24,000 other Rotarians from around the world came together for inspiring keynotes from world leaders including Canadian Prime Minister Justin Trudeau, motivational breakout sessions on leadership, and networking camaraderie.

“It was an amazing experience,” says Freedman. “By attending the conference, I got a much better understanding of what Rotary is doing around the world. From water and sanitation/hygiene projects in much needed areas like Chad, Ethiopia, and India to the almost complete eradication of polio, Rotary is having a major global impact.”

It was quite fitting that Freedman attended the convention, given that this year marks the 30th anniversary of women in Rotary. Although Chicago attorney Paul Harris formed the first Rotary Club in 1905 for professionals with diverse backgrounds to network, exchange ideas, and give back to their communities, it wasn’t until 1987 when the U.S. Supreme Court ruled that Rotary Clubs could not exclude women from membership based on gender. Sylvia Whitlock, became the first woman in the Rotary World that same year to serve as a club president in Duarte, California.

Freedman has built a career on giving it her all and making a difference. Prior to her current role at the YMCA, she worked at The New Children’s Museum in Hartford as the director of development. Earlier roles included director of development positions at The Housatonic Valley Waldorf School and Litchfield Montessori School. Freedman currently serves on the Board of Directors at EverWonder Children’s Museum in Newtown and on the Board of Trustees at The CH Booth Library, also in Newtown.

This career path, coupled with her commitment to volunteerism, aligns with Freedman’s personal priority that her local communities are safe and sustainable. It’s also what makes serving as a Rotarian a perfect fit for her. In fact, at last month’s annual Wilton Rotary Celebration Dinner, Freedman and fellow Rotary Club member Andy Mais received the Paul Harris Fellow Award, which acknowledges individuals who have made significant contributions in the spirit of volunteerism.

“I was completely surprised to receive the award,” admits Freedman.

Freedman was introduced to the Wilton Rotary by Karen Strickland, her predecessor at the YMCA, and Freedman soon realized that participating in Rotary would be a great way to meet like-minded people who were interested in volunteering, making a difference, and building new friendships.

“It’s really the people beyond anything else that inspires me,” Freedman says. “I look up to these people as leaders of the community and am grateful for the mentorship that they offer. I am constantly learning from them and I am thrilled to work alongside them to make a difference.”

In addition, the Wilton Rotary Club has supported many global efforts, such as Rise Against Hunger, an international hunger relief non-profit organization that coordinates the packaging and distribution of food and other life-changing aid to people in developing nations, and the PolioPlus Fund, which works to protect children against polio.

Freedman is forever a Rotarian. “Attending the international conference solidified that,” she says. “It was such an honor to meet all of these extraordinary people doing incredible work around the world. And it’s an incredible honor to be part of the same organization as all of these people.”