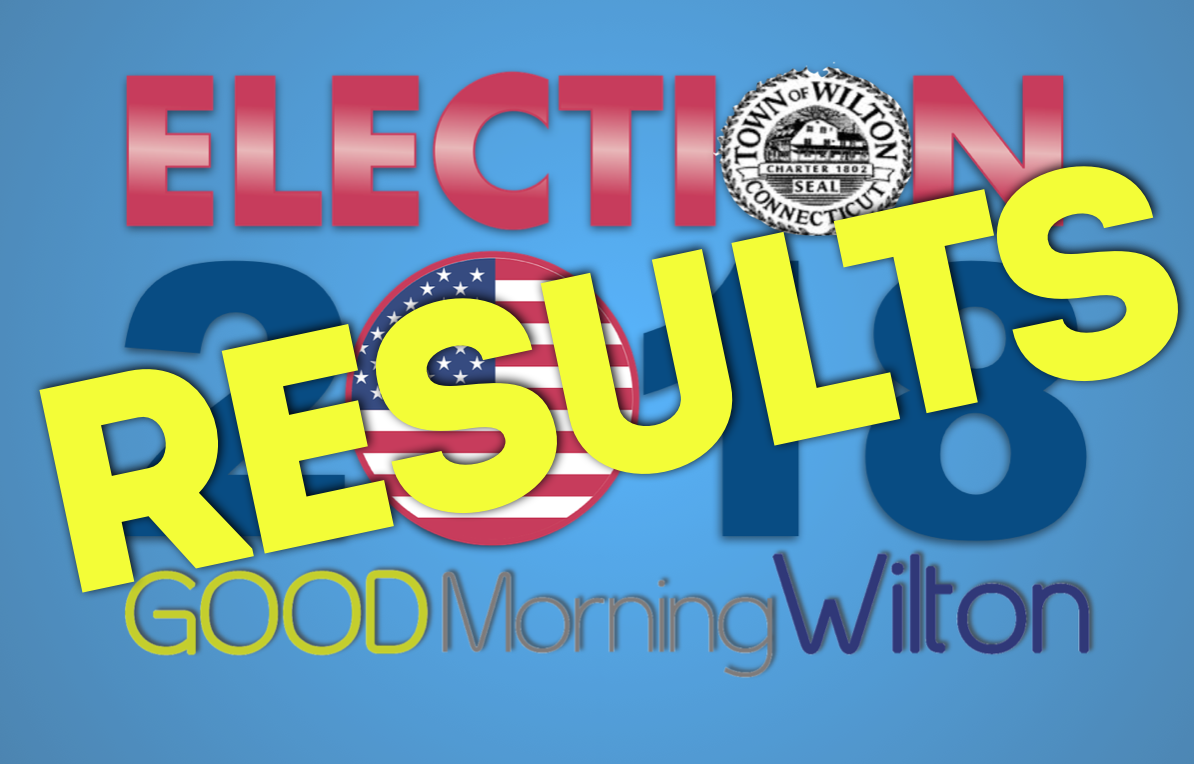 We’re starting coverage as of 7 p.m. and this will be your GOOD Morning Wilton hub all evening for our coverage of Wilton Votes Election 2018. Check here and on Facebook for our LIVE coverage all night long!

Wednesday, Nov. 7–Wilton’s registrars of voters released the tally of votes–still unofficial–that they submitted to the Secretary of State:

6:15 a.m.–no official word on the Lavielle-Thomas race, although one other media outlet has called it for Gail Lavielle, giving her the victory. Still no official comment from either Gail Lavielle or Stephanie Thomas…

1 a.m. What about the Lavielle-Thomas Race in the 143rd State House District?

From what we’re hearing, Lavielle is currently ahead by 465 votes with Wilton, Westport and most of Norwalk reporting. Lavielle won handily in Wilton (3234 to 2604) and reportedly won Westport. But one vote tabulating machine broke at a Norwalk precinct–and now there’s no word on who’s ahead. Lavielle reportedly won the votes cast in the other voting machine at the same precinct. But as of 1:15 a.m., there’s no confirmation or comment from either Lavielle or Thomas.

It’s unofficial until certified by the Secretary of State, but that’s the number sent out by the Wilton registrars of voters.

“I would like to congratulate Will Haskell for running a strong campaign and wish him much success in his new role as State senator for the 26th district. It is a big responsibility and I am sure he will devote his energies to serving the people well. I am deeply thankful to the voters for having given me the rare and extraordinary honor of serving them here at home, on local boards and in the legislature in Hartford. I have always put every ounce of passion, commitment and energy into these roles with ultimate objective of serving my constituents well. Coming here as an immigrant with no money, education and not speaking a word of English at the age of 5, CT has had an incredible positive impact on my life and I am forever grateful. Here we are at the last polling location of the night in Wilton. A few machines broke so we may not know the results until very late. Thank you also to my family, wonderful husband and the many volunteers who stuck with me through this tough campaign season and over the years. I could not do this without you. You have my eternal gratitude. Thank you.”

Despite winning Wilton by a slim margin, Democrat Ross Tartell has conceded the election for State Rep of the 125th district to New Canaan’s Tom O’Dea (R), who won re-election thanks to a much larger lead in his hometown.

Both CTNewsJunkie.com and The CT Mirror are reporting that the 22-year-old Haskell will replace Boucher.

10:00 p.m.–We had a reader question asking if absentee ballots are counted tonight. They ARE counted tonight, and are counted by a tabulator (machine) at Town Hall. They will be added by registrars to the total votes that get reported to the secretary of state’s office.

9:00 p.m.:  UNOFFICIAL Wilton results, tabulated from our reports at all three precincts. This does NOT include absentee ballots and is NOT official from the registrars. It also, right now, only reflects how Wilton voted:

8:05 p.m.:  poll workers at all three precincts are now checking names, closing up machines, making sure that counts match.

7:50 p.m.  If you have any photos of you after you voted that you’d like to share, or of your voting day experience, please send it to editor@goodmorningwilton.com.

Did You Have Problems Voting?

We heard there were a couple glitches at the polls for some people…if you have a story of something that happened to you that you would like to share, email us at editor@goodmorningwilton.com.

7:45 p.m. Just arrived at Wilton High School Clune auditorium, where I’ll be until polls close. Gail Lavielle (candidate for re-election, State House District 143) is still outside, and Toni Boucher (candidate for re-election State Senate district 26) is on her way… she sent a comment:  “Whatever the outcome. I am deeply thankful to the wilton community for giving me the extraordinary honor of serving them here at home on local boards and in Hartford. Wilton has had an incredible positive impact on my life and I am forever grateful.”

6:50 PM:  As of 5 p.m. 6,936 people had voted in Wilton, not including absentee ballots. That represented 53.5% of Wilton’s 12,972 registered voters. Registrar of voters Karen Birck told GMW that 70 people registered to vote today and cast a ballot at Town Hall’s Election Day Registration precinct.

Tuesday, November 6, 2:45 p.m.–Wilton voters are turning out at high numbers, according to reports from the Wilton registrars of voters. As of 2 p.m. today, there have been a total of 5,399 voters who have cast ballots at Wilton’s three precincts (and at Town Hall, for Election Day Registration). That number represents 41.8% of Wilton’s 12,952 registered voters.

For comparison, there were 11,482 registered voters in 2014, for the last midterm election. That year there was a 60.51% voter turnout in total. If turnout continues to be as strong this year, Wilton seems to be headed for a higher turnout rate for 2018.

Registrar of Voters Annalisa Stravato told GOOD Morning Wilton that voters were lined up outside polling precincts before they opened at 6 a.m. this morning. She added that precinct moderators at Wilton’s three polling locations reported that there was “high energy” from voters.