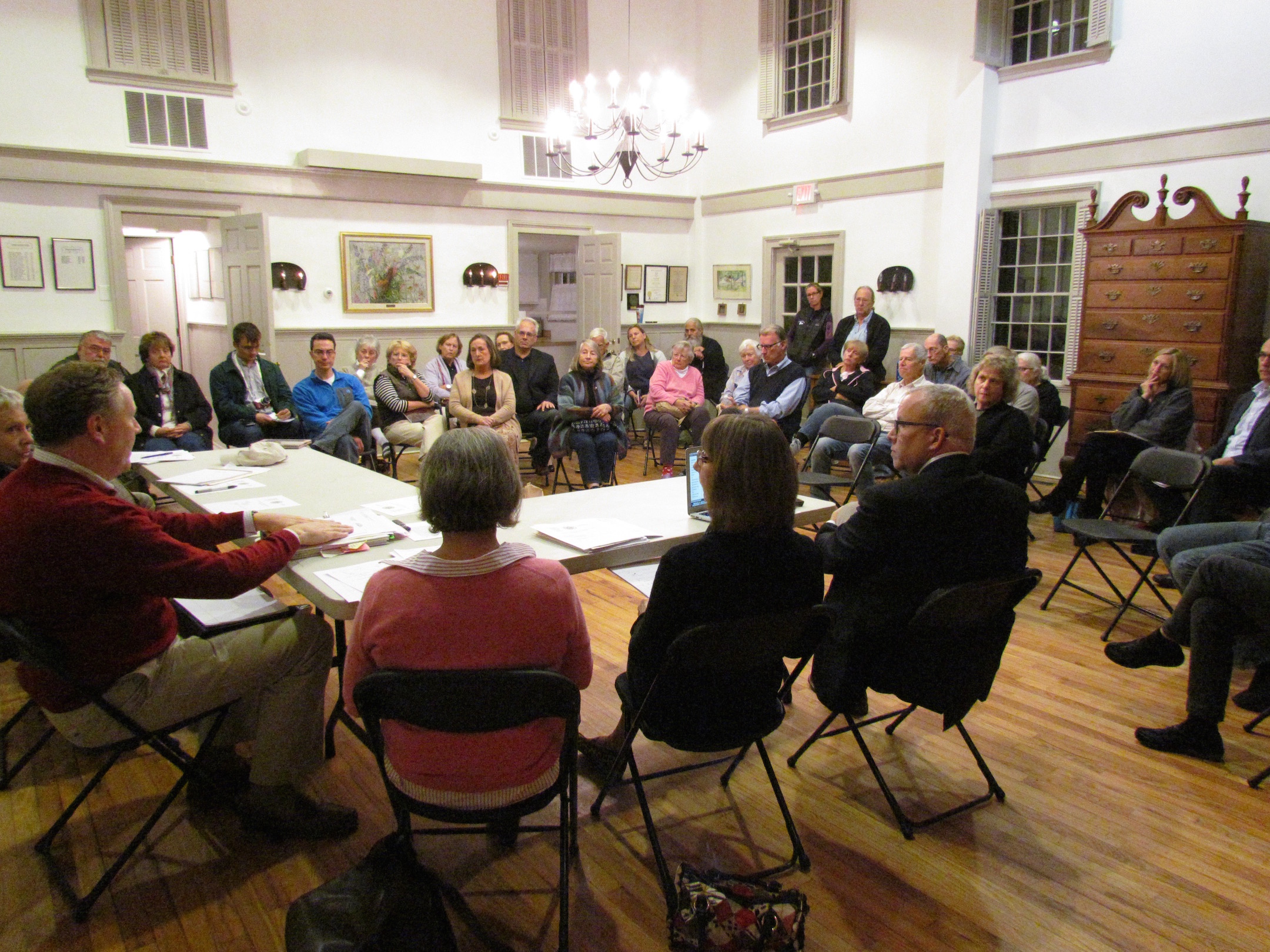 At last night’s special meeting of the Historic District and Historic Property Commission, the commissioners voted unanimously to impose a 90-day demolition delay on any structures on the property at 183 Ridgefield Rd., commonly known as the Schlichting property.

The 13.5-acre property includes not only an approximately 160-year-old house but also a barn, shed, garage and car-port. The builder who purchased the property in August posted an intent-to-demolition notice on the property.

The potential demolition of the home and possible subdivision of a large chunk of open space so close to Wilton Center has inspired a growing public sentiment from residents hopeful that they can save the house from destruction. A petition effort was started by resident Victoria Mavis, and as of Tuesday evening at 11 p.m., the petition on change.org had garnered 332 signatures. In addition there has been discussion on social media forum and local Facebook pages. Approximately 30-40 people attended the commission hearing, which typically gets few to no public spectators when they regularly meet.

Kevin Quinlan, the chair of the commission, explained to the crowd that while the commission understood and appreciated the community’s interest and passion in seeing the home stay a part of the Wilton landscape, the commission had little power to do more than slow the process down.

“The builder owns the land, the deal is done. They now have property rights as the owner. We as the commission cannot force the owner to take any kind of action on his property one way or the other. Property rights are not something we can overturn,” Quinlan explained.

He noted that town officials he spoke with indicated that the town has little to no ability to direct funding toward any possession of the house, especially with “an abundance of capital projects, including MD, Comstock, and the sidewalk program.”

He said that press reports elsewhere stating that the builder had made promises to keep the structures intact were “inaccurate.”

Editor’s note:  GMW.com has consistently reported that, according to Kevin O’Brien of O’Brien Premier Properties, the realtor who represented the seller, the house was sold with no promise or condition that it be preserved. “The buyer understands that the seller would like to see it preserved and hopefully he will preserve it,” O’Brien said.

Quinlan added that he visited and toured the property with the owner, and took pictures with the owner’s approval. He said that while the house “is in pretty bad shape, the trim is rotted on the inside. It’s quite rotted, the trim is rotted, there’s evidence of water damage and wasps nested in the cupola, and it does smell moldy when you go in.” Remarking on the house’s “unique character,” he added that, “it would require a lot of money to fix it up.”

He did point out specific features that are “in good shape,” including some wide boards throughout rooms of ground floor, some nice marble mantles, ceiling medallions where chandeliers are mounted, and high ceilings. “It could come back to life with TLC,” Quinlan said.

The commissioners acknowledged several times, to explain to the crowd, that their “authority is quite limited, but we remain hopeful.”

Quinlan noted that multiple site plans exist, from what he’s heard, and that one, “if the zoning and would work in concert with the owner, would allow the house to stay, and perhaps the barn as well. It would be worth considering…” Quinlan did not elaborate on whether the zoning in question would involve multi-family housing or a reduction from Wilton’s 2-acre zoning regulations.

He also explained to the members of the public that the owner has made it clear he does not plan to do any demolition for a while, and that, “they’re willing to self delay so nothing’s going to happen fast.”  Quinlan added that it seems, “somewhat encouraging.”

However, some members of the audience noted that there has already been tree cutting work done on the property. The commissioners pointed out that any 90-day-stay on demolition didn’t mean that the developer had to cease other work on the property; it only means there can be no demolition work on the structures during those 90 days.

Quinlan encouraged any members of the public who want to engage in a “path to dialogue” with the builder. He said that while the commission was limited in its charge and mandate to placing the 90-day demolition delay, it didn’t mean that the commission didn’t support efforts to save the house from demolition.

“We don’t want the impression that we want to quell groundswell. We don’t want to put it out there that we’re giving up in any way. If anything we’re saying we’ve done what we can do, and we encourage your mission.”

Quinlan read an email from Pam Brown, a representative of the Wilton Congregational Church, which owns Hillside Cemetery. The property in question at 183 Ridgefield Rd. abuts the cemetery. Brown, who was in attendance at the meeting, said that the area of the cemetery closest to the property in question is the oldest section, with graves dating back to the Revolutionary War era.

Much of the public comment was filled with remarks supporting some type of community effort to save the house. Among the options considered was the group working through the channel of the building department–specifically though town planner Bob Nerney–to see if conversation with the builder would come up with a workable solution.

CORRECTION:  The article was updated to reflect the age of some of the graves in Hillside Cemetery. While the cemetery was officially established in the early 1800s, some of the earliest graves are from the late 1700s. There are several Revolutionary War soldiers buried in the cemetery.