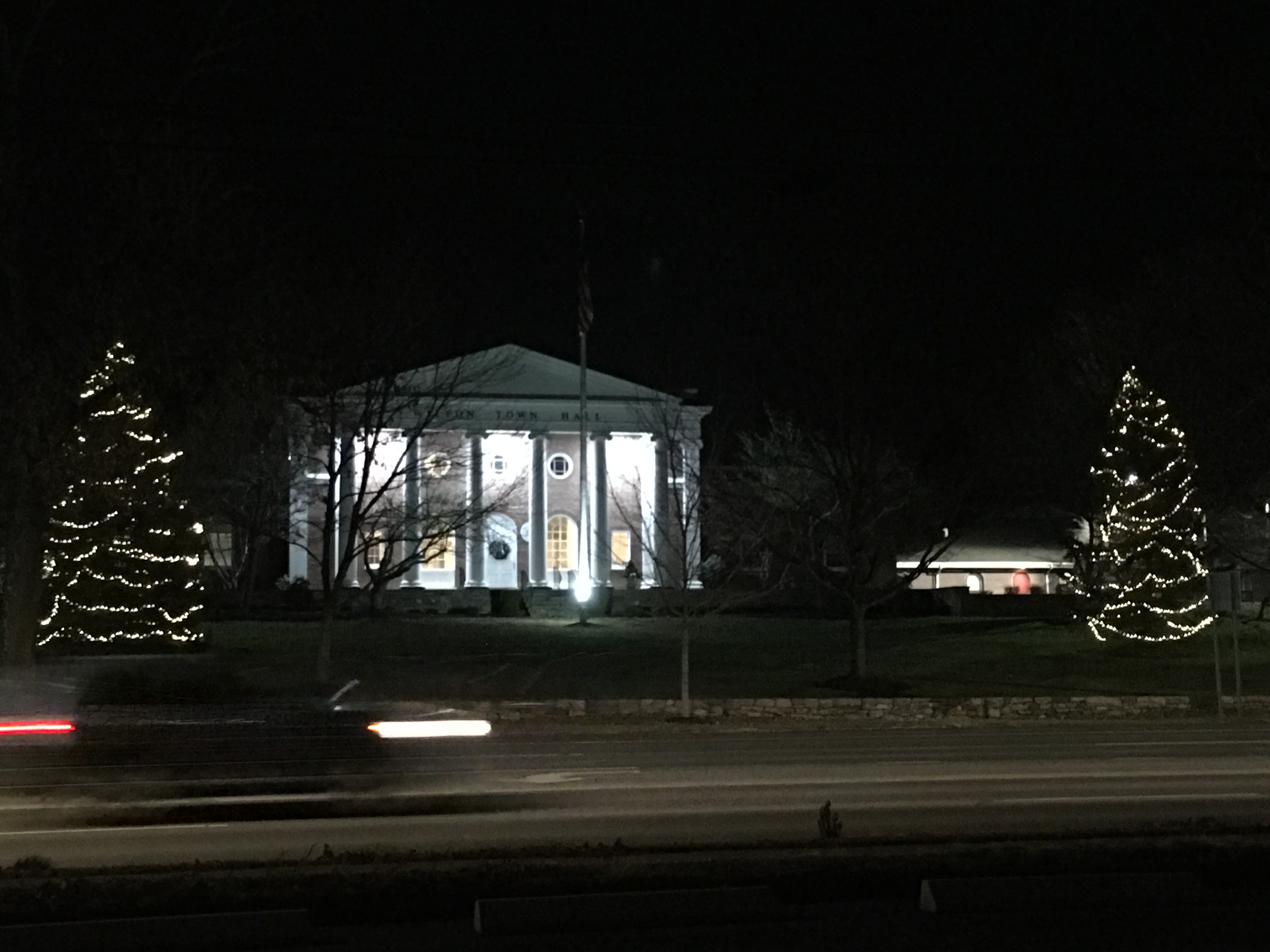 On Monday, Dec. 18, the Board of Selectmen voted unanimously to again turn on the lights that decorate two trees in front of Town Hall, ending a debate that had raised the ire of some residents when those lights were temporarily darkened while town officials researched the implications of religious symbols on public property.

The five-member BOS also decided to take the suggestion of selectwoman Lori Bufano to create a committee to suggest decorations for next year that would be more inclusive and representative of residents who celebrate not only Christmas but also other holidays. Whatever ideas the committee comes up with would have to be vetted with town counsel before being presented to the BOS in time for the 2018 holiday season.

The move pleased the majority of the more than 20 people who filled the seats in the meeting room, many of whom had come to offer public comment about wanting the lights turned on again. Although the only lights that had been dimmed were those that decorated the two trees in front of Town Hall, several said they thought Wilton Center looked dark as well.

“When I come downtown and I don’t see anything, I say I’m in the wrong town. I’m going to go up to Ridgefield, because there at least it looks like Christmas, like the season is being respected,” said Peter Wrampe.

Resident Sue Wall said she wants to see more lights all over. “I’m someone who loves to see all the ‘bling’ and festivities of Christmas. But this whole thing should be about inclusion, not exclusion. There’s no reason that we can’t have all that we’ve had and add more to it. I read about why you made the decision about the blue and white [banners], and that makes sense. You probably have the [red and green] Joy banners in storage somewhere–why don’t you alternate them? Joy is for everybody, it’s the joyous season. It’s not ‘for’ or ‘against’ anyone in particular, it’s for all of us.”

First selectwoman Lynne Vanderslice addressed the topic of adding lights in town, noting that people who had complained over the last two weeks had compared Wilton to neighboring towns like Ridgefield and New Canaan.

“Ridgefield has lights on an entire street, and New Canaan puts lights on 50 trees,” she said, adding that the idea of putting up more lights in Wilton had been considered in the past but was found to be too cost prohibitive for the town to fund itself. Both of those towns spend upwards of $20,000 for new lights and ongoing maintenance.

She also noted that the current Wilton Center lamppost decorations had been put up in 2016 and received no complaints at the time. “There were a number of compliments. I was surprised to find out that people are so unhappy with them,” she added.

During public comment, several residents made the case for whatever display is used, that it be representative of more than one belief, culture or religion.

“We need to be a community that welcomes and includes everyone. I understand the legal issues, I would like to argue the position for having all there. I think it’s a strong statement that we welcome all and that we honor traditions that are different from our own, and that each of us has traditions that he or she wants to express. The expression of that is something the town should honor, welcome and encourage,” said Steve Hudspeth.

Vanderslice had turned off the lights on the Town Hall trees following the BOS meeting on Dec. 4, after a 6th grader had asked the board to add a menorah at Town Hall. The decision to turn off the lights two days later was based on Vanderslice’s desire for fairness while she researched the facts about what kinds of religious symbols could be displayed on government property.

“Every first selectman has to make decisions. We bring to those decisions our life experiences and our sensibilities. Two concepts that are ingrained in me are fairness and facts. At our last meeting, I provided information that I thought to be factual, that under the law, a menorah is a religious symbol. I provided this same information to [the 6th grader], her mother and you all in an email prior to our last meeting. In that email, I said that we did not have a menorah at Town Hall because, one, there was a menorah in Wilton Center and, two, we could not put up a menorah without being required to put up other religious symbols, which leads to other issues.”

After asking town counsel Ira Bloom to research the pertinent laws on the issue, she learned that a menorah may not be considered religious in certain situations when it is placed with a Christmas tree and a third element–in the legal case that many had pointed to during the recent discussions, it wasn’t considered religious when it was placed with a Christmas tree and a sign about liberty.

Giving the issue much thought, she said she realized the following:

“I was concerned because I had provided the Board of Selectmen, the girl and the public who listened with the wrong facts. It wasn’t intentional, but it was before that case had been reviewed. Because the subject was ongoing at the board, I had the option to attempt to replicate the facts that were in that case, to allow the menorah to be put up. So I gave this a a great deal of thought and I struggled with the fact that the one request this year that had been fulfilled was mine, to put up [white] Christmas lights on the two trees, but one request was derailed because of the town not having all the facts. In the end I decided it wasn’t fair and I decided to temporarily unplug the lights until I could come to the Board of Selectmen and you could inform me and provide me with your guidance.”