Home Community How Far Can a Pumpkin Fly? 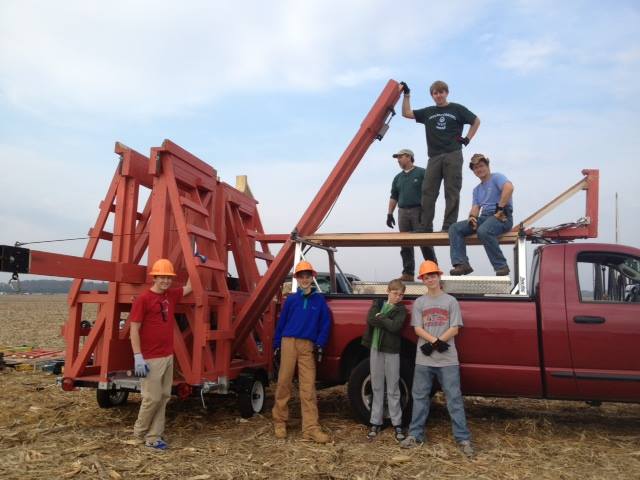 The right soil, a good fertilizer, you can GROW a pumpkin.

Some good carving tools, a candle, that pumpkin can GLOW.

But what does it take to THROW a pumpkin really, really far? Like, quarter-of-a-mile far.

Thanks to Kevin Meehan, program director at Ambler Farm and science teacher extraordinaire, and a modern version of a medieval catapult-type contraption called a ‘trebuchet,’ there are some Wilton teens who are learning how to do exactly that. Not only have they built the trebuchet by hand, not only have they perfected the science, mechanics and engineering behind it, but they’re traveling down to Delaware with it to compete in the “World Championship Punkin’ Chunkin’ Competition” to try to win the youth division by hurling a pumpkin the furthest.

“You get one throw each day over three days. We’re aiming for 700 feet the first day. Once your machine is on the field, it can’t be taken off the field for the whole competition. It’s the best of all three throws. For the youth division, you can’t use less than a four-pound pumpkin. It’s almost a mile-and-a-half open field. We’re looking to throw our first one, add more weight, re-set our finger and try and calibrate it for our throw the next day,” Meehan explained.

Yes, in addition to fun there is also science and learning built into the project–figuring out how much weight to use, what angle to set the tossing ‘finger’, and the right timing of when the sling releases to make the machine toss the furthest. In addition to Meehan, there are several adults who have spent countless hours advising and helping the student team members and they’re all dedicated to making this work.

The group has a storied history. Recruited by Meehan for an Ambler program two years ago to build a new trebuchet for the farm, the kids learned so much and did so well, Meehan decided that reaching for the Punkin’ Chunkin’ competition could be something more than just a pipe dream. They had registered to compete in last year’s event, but their best-laid plans were dashed by Hurricane Sandy. Even though the device weathered the storm with no damage itself, the loss of power and the destruction locally was enough to keep the team home. Meehan tried to drive part of the way just to watch, but realized that gas shortages would prevent him from reaching his destination and returning. To everyone’s disappointment, they were forced to throw in the towel for 2012.

Down, but not out, Meehan knew that the team would simply postpone their pumpkin tossing dreams until 2013. “Last year we had so many issues, and we changed many of them. The fact that we weren’t able to travel to Punkin’ Chunkin’ served us in the long run because we were able to reset the tower–we took three feet off so it’s more manageable. We realigned things better and changed other things, made the launching system more reliable.”

The group of kids are clearly dedicated. They stood in the windy, cold Ambler field late one Sunday afternoon, tweaking cables, moving weights and carefully setting the trebuchet for each trial toss. They all wear bright orange hard hats and familiar blue-and-white windbreakers favored by the athletes around town–you know, the ones emblazoned with “Wilton Football” or “Warrior Baseball” and the like across the back. Instead, these jackets are branded with “Pumpkin Warriors” on them, and the outerwear clearly unifies the group as an official “team,” and the teens wear them with pride. There’s something spine-straightening about a team that isn’t so much about the sport as it is about the smarts.

Okay, truth be told, yes–it is also about the smashing. There’s something very satisfying about the smashing of gourds on the ground, a quarter of a mile down the field. The kids will get to try it for sure, making their first competition throw today, and hopefully returning home victorious after Sunday.

The competition will be televised on Discovery’s Science Channel on Thanksgiving evening at 8 p.m. The fact that the Ambler Farm team passed muster enough to be accepted for entry into the competition means that they’ve at least won the right to automatically enter every year after. “That means the program continues. We made sure the name was the Ambler Farm team so that in the results on the website it will always say ‘Ambler Farm.’ It really will become a significant program for the farm and can be done every year,” Meehan explained.

It’s also potentially life-changing for students who are learning more about themselves.

“If any kid has any inkling toward engineering, or maybe even they’re just unsure, when they go down there, seeing what happens could make them change their direction. It’s backyard engineering at its best. It gets you so excited about engineering. For some that’s the experience. For others, they’ve been watching this on TV for years. The idea of going down and participating in an event that’s on TV sends the message that you can do whatever you want to do. It is possible,” Meehan said.

GOOD Morning Wilton will have the results through the competition and will update them on Facebook.