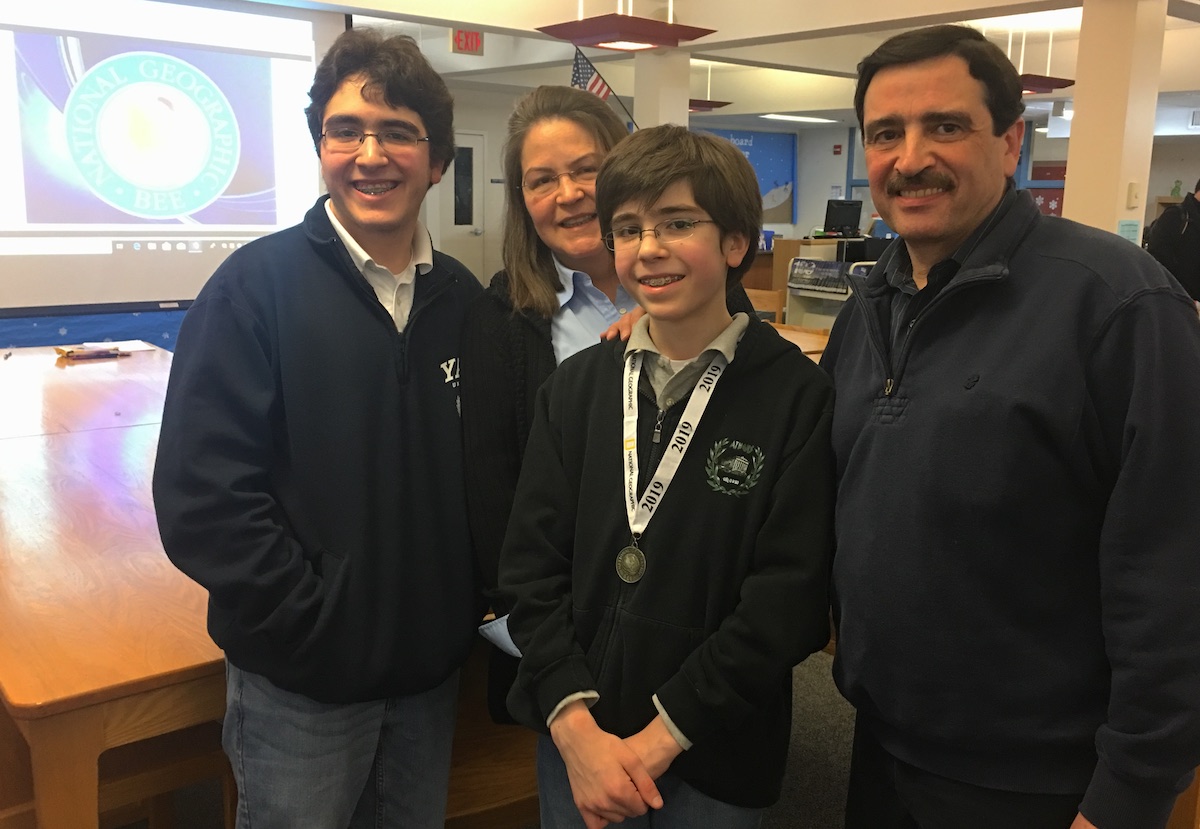 Perhaps it’s in the genes, but after 8th grader Lukas Koutsoukos won the Middlebrook Geography Bee on Wednesday for the third year in a row, it’s clear Wilton can officially say it’s got a family of geography whizzes. Lukas’ three wins mirror those of his older brother Alex, now a junior at Wilton High School, who also swept the Bee during his middle school years.

Both boys have been passionate about all things geography since they were very young. Lukas loves learning, say his parents, Maria Miranda and James Koutsoukos.

“He reads, he studies a lot of maps, he’s into a lot of history also. He might be stronger in history, actually,” mom Maria adds with a laugh.

All 1,000 or so Middlebrook students participate in a first round, with one winner per team in each grade eventually meeting in the school’s bee. To take the Middlebrook title, Lukas faced eight other students:  6th graders Liam McNamara, Varish Durisetti and Kieran Lenihan; 7th graders Abby Schwartz, Anderson Campbell and Nick Huberty; and fellow 8th graders Vihan Jayawardhane and Dave Sylvester. He thought it would be a difficult field and really worked hard to prepare.

“I was very stressed. There were a lot of tough competitors, namely Vihan, who took second place,” Lukas said after his win. ”

Middlebrook’s Geography Bee is part of National Geographic‘s program. Questions are supplied by the Nat. Geo. team, and encompass a lot more than simply, “What’s the capital of Country X?” “It really is comprehensive, there’s a cultural piece, geography, natural resources, and usually all the questions are designed to put a map-related clue along with something cultural. They’ll even put current events in, it’s really more social studies but there’s always a geography piece in there somewhere,” explains Dr. John Priest, a 6th grade social studies teacher at Middlebrook who runs the competition. A perfect example was one question that even wove in current events:  “Which country, which is hosting the Alpine World Ski Championships in February, is the most populous Scandinavian country?”

Each of the 10,000 schools across the country that participates finds its school-wide competition winner, who takes a proctored test; the top 100 scorers in the state move on to compete at the state level. Each state winner will then compete at the national Geography Bee, which takes place in Washington, DC in May.

The older Koutsoukos boy represented Connecticut at the national competition in 2015–when GOOD Morning Wilton interviewed Alex at the time, Lukas, who was then a 9-year-old, made sure GMW included information about his own academic achievements too. In fact, Alex’s participation in geography bees was one of the things that inspired Lukas’ interest in geography and competition, so much so that the younger Koutsoukos pushed for a Cider Mill School Geography Bee as a 5th grader–which he promptly won. Now, with this year’s win, Lukas can claim one more Wilton win than his brother.

If all goes well, Lukas will head to the 2019 CT competition, something he placed third in last year. Of course he has hopes to make it to Washington, DC this time. To do so he’ll keep working, studying his maps and reading, reading and studying his maps.