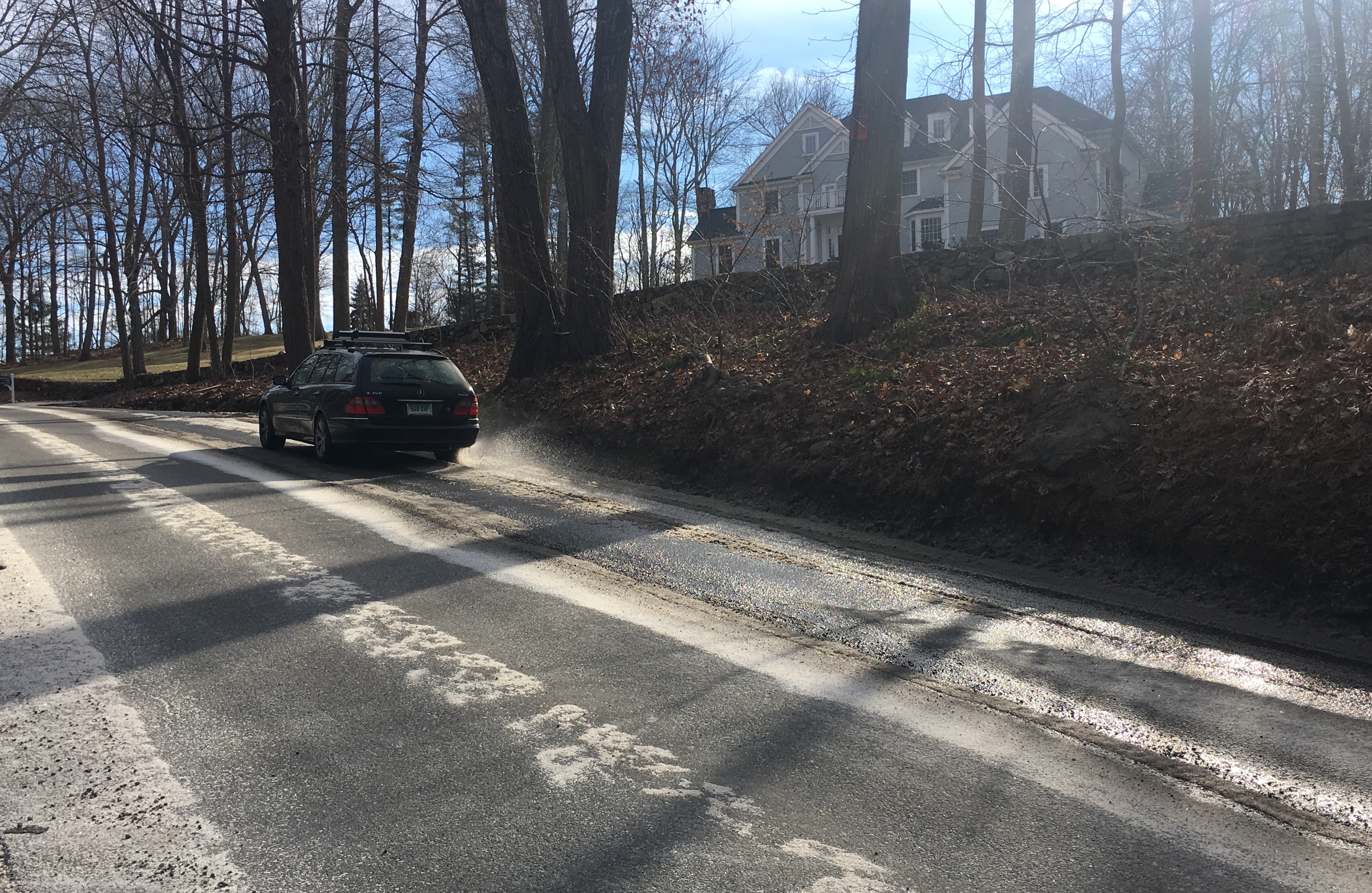 With warmer-than-usual temps and significant rainfall up until now, Wilton is experiencing an unusual–and dangerous–phenomenon on some roads in a handful of spots around town. Water , often from private property, is draining onto roadways, and now that temperatures have been dropping, creating slick, icy patches that present possible driving hazards for motorists.

The issue has been firing up the town’s SeeClickFix public works reporting system, with multiple residents posting complaints and notices about the dangerous conditions on Cannon Rd.; other locations where the same issue is happening include Westport Rd., Ridgefield Rd., Belden Hill Rd., and Cedar Rd., among others. [Editor’s note:  the Belden Hill Rd. location is just over the town border between Wilton and Norwalk, and is not the town’s responsibility. Similarly, anything on a state road has to be handled by the CT Department of Transportation.]

The drainage problem at 153 and 159 Cannon Rd. has been particularly problematic, given the location on a section of roadway on a hill that curves. One person reported seeing a school bus slide on the patch of ice, and residents have posted about the problem multiple times on SeeClickFix, stretching back into 2018.

“This was the wettest fall in recorded history. The groundwater levels are extremely high. We’re not the only town dealing with this. I live in Norwalk, and woke up with a foot of water in my backyard on Christmas Day,” says Chris Burney, Wilton’s director of public works and facilities. “It’s not unique to Wilton.”

Add in fluctuating temperatures, and overnight freezes, it makes for a bad combination. “If the ground is frozen, even just at the surface, and it rains, then there is nowhere for the water to go and surface flooding will definitely occur.”

But, he adds, there may be other factors that need looking into. “You’ve got the occasional thing you can’t just discount by saying, ‘It’s high groundwater.'”

In fact, the town is looking into whether there is more at work than nature on Cannon Rd., where the seepage is in a spot near two newer homes that were built within the last five years. Neighbors have complained before this winter about drainage problems there and residual impact, including roadway erosion and dirt and rocks scattered on the pavement.

It’s something about which Burney says the town is very aware. In fact, he spoke with GOOD Morning Wilton shortly after coming out of a meeting about those properties and this issue.

“We’re going to go back and take a look at the original drawings for the houses, and the plans, and we’re going to need to make sure that everything was done according to the plans. Because there’s a consistency from the people who travel the road who say, whether it was there before, it certainly has gotten worse since those houses were built. We’ll go back and look at what was on the application, what was on the permits, and make sure that it was done according to plan. I don’t know what we’re going to find, if anything.”

He says the town is actively dealing with the area, regardless of what’s causing it.

“Every time we get cold, freezing weather, we send a crew up there, and sand and salt the area. Which is not a permanent solution.”

Whatever the town discovers, any remediation that can be done won’t happen until at least the spring. Still, with such little snow on the ground now, drivers may be driving like it’s summer, not expecting icy patches. Officials are asking drivers to be careful.

“We’re not going to just ignore it. We can talk about the heavy rainfall, but we’re going to look at each situation more in-depth. It would be easy to say, ‘It’s raining, what do you expect?’ But we can’t do that,” Burney says.