Home Community Kids: Come Run Monday to ‘Save the Children’ 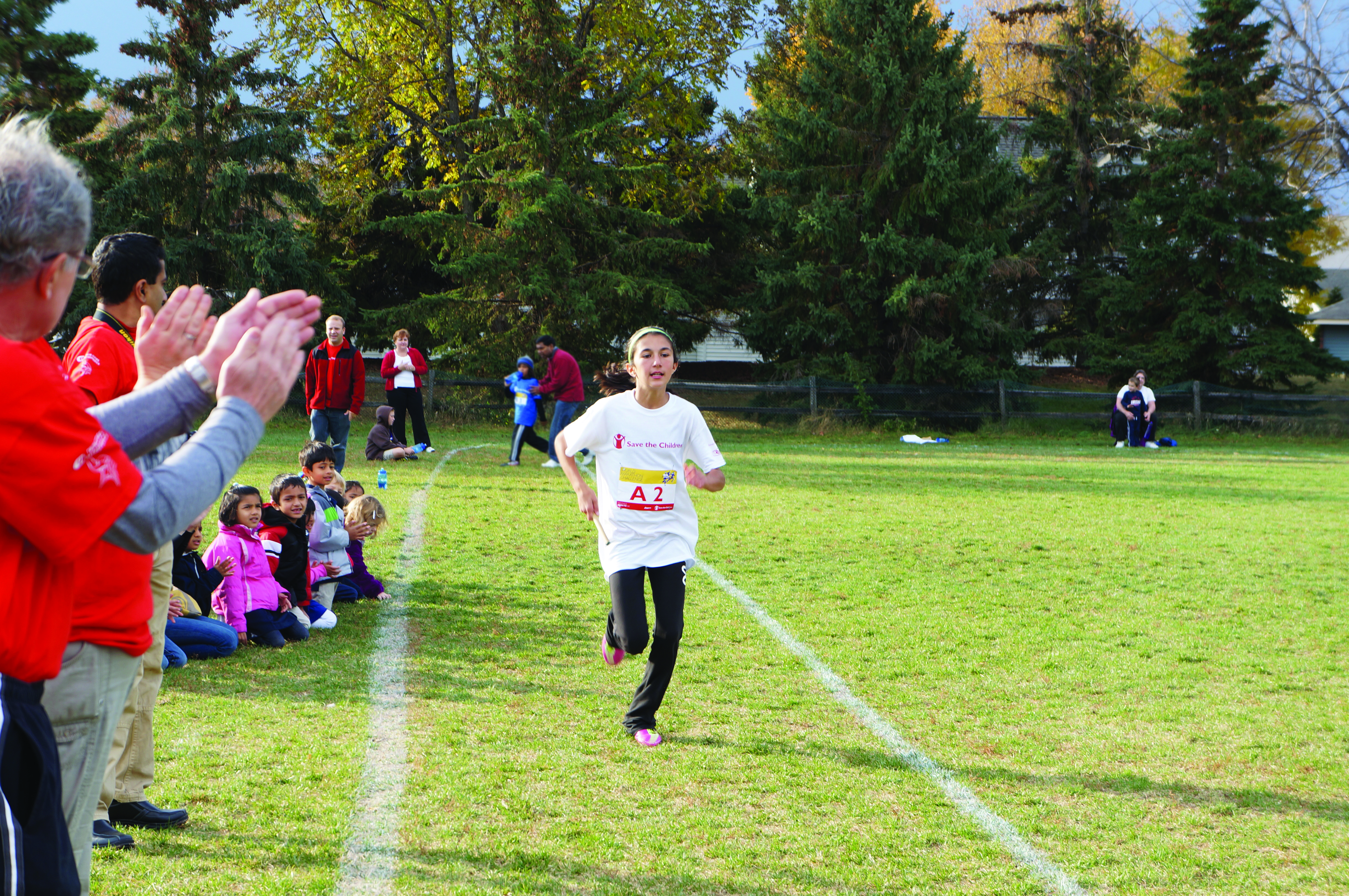 Just because they won’t be in school on Monday’s Columbus Day holiday, it doesn’t mean that many Wilton children won’t be doing something amazingly GOOD for themselves and for other kids. Upwards of 200 children (and hopefully more) will be taking part in a global event called the World Marathon Challenge.

The event is being orchestrated by Westport-based Save the Children, a non-profit organization that helps children around the world—in 2012, Save the Children helped more than 125 million children, 240,000 of them in the United States.

The World Marathon Challenge (WMC) is a global relay in which teams of children from around the world challenge themselves and each other to complete a full marathon distance or 26.2 miles. The event raises funds and awareness for Save the Children’s programs in the United States and globally.  Throughout October, there will be 50,000 kids in 60 countries participating, including about 12,000 in the U.S.

Wilton resident Jennifer Kendra is the director of strategic partnership development for Save the Children, and it was especially important for her to get Wilton kids involved, either by having kids sign up together as one team of 26-36 kids (for instance through a group or organization) or individually to run in the relays and take part in the activities. She contacted various Wilton sports teams and other organizations around town, with the idea to get all kids involved in helping kids around the world.

“They’re doing something active and physical, and cause-related as a group. It’s designed to get kids helping other kids by being active and working as a community, she explained, adding it supports the philosophy and mission of Save the Children—working to give every child the right to survival, protection, development and participation:

“Not every child gets that chance, and our vision in working toward that is not a sprint, it’s a marathon. By having kids take part in this marathon, by running and fundraising, our kids are helping other kids who don’t have the same chances.”

For Kendra, it was also the opportunity to bring the community together. As the league director for Wilton Youth Field Hockey, she’s typically in charge of planning a jamboree every year on Columbus Day, but because some of the schools that used to participate now schedule school that day, the jamboree wasn’t going to happen.

“But we had the stadium reserved, so I took it to the high school athletic director, Chris McDougal, and presented him with the idea of the World Marathon Challenge. He got on board and has been kind enough to get the high school behind it, to get all the sports captains involved, and get us some high school teams run and mentor our youth teams.”

Wilton kids of all ages can get involved—elementary aged through high school. Teams can be under age 13, over age 13, mixed—so even parents and kids can run together. The kids aren’t competing against one another; instead they’re competing to break the world marathon record. “It’s in a relay format, and they run 200 meters each leg. If you have 36 kids, it’s very doable for everyone. You can walk it, you can run it, it doesn’t matter—it’s just about the spirit of everyone coming together and being active for kids.”

Kendra said that they anticipate at least 200 kids will take part, and that they’re still actively recruiting and organizing. As of Tuesday afternoon, 184 kids had registered.

Some town organizations, like Wilton Youth Football, have organized their own teams, either based by age or group affiliation. But that doesn’t mean that individuals can’t sign up and take part too. Kendra said they can join any team that’s registered. “Click on the website, there are a number of Wilton teams that have formed, and individuals are welcome to join any team,” she said.

People can also come to the event and register there on the day of the rally.

The Wilton PizzaTruck and College Creamery will be there as food vendors, and there will be additional activities and games on the infield while the relay happens around the track.

Kendra has also recruited former NFL runningback Vince Workman, to be the celebrity trainer for the participants. He will be on hand to warm up the runners and lead activities on the infield. Workman, now a physical trainer and CT ambassador for the NFL’s “Heads Up program,” is engaged to one of the Wilton Youth Field Hockey coaches, J. Wendi Massaro, and connected with the event through her.

Workman was selected by the Green Bay Packers in the fifth round of the 1989 NFL Draft and played eight seasons in the NFL from 1989 to 1996, for the Packers, the Tampa Bay Buccaneers, the Carolina Panthers and the Indianapolis Colts.

The program starts at 11 a.m. but registration and sign in begins at 10:30 a.m. on Monday morning. Anyone is welcome to register a team, put together a team, join a team (teams with open spots are indicated on the website) or donate and sponsor participants. Kids can sign up to participate online, at www.wmc.savethechildren.org.