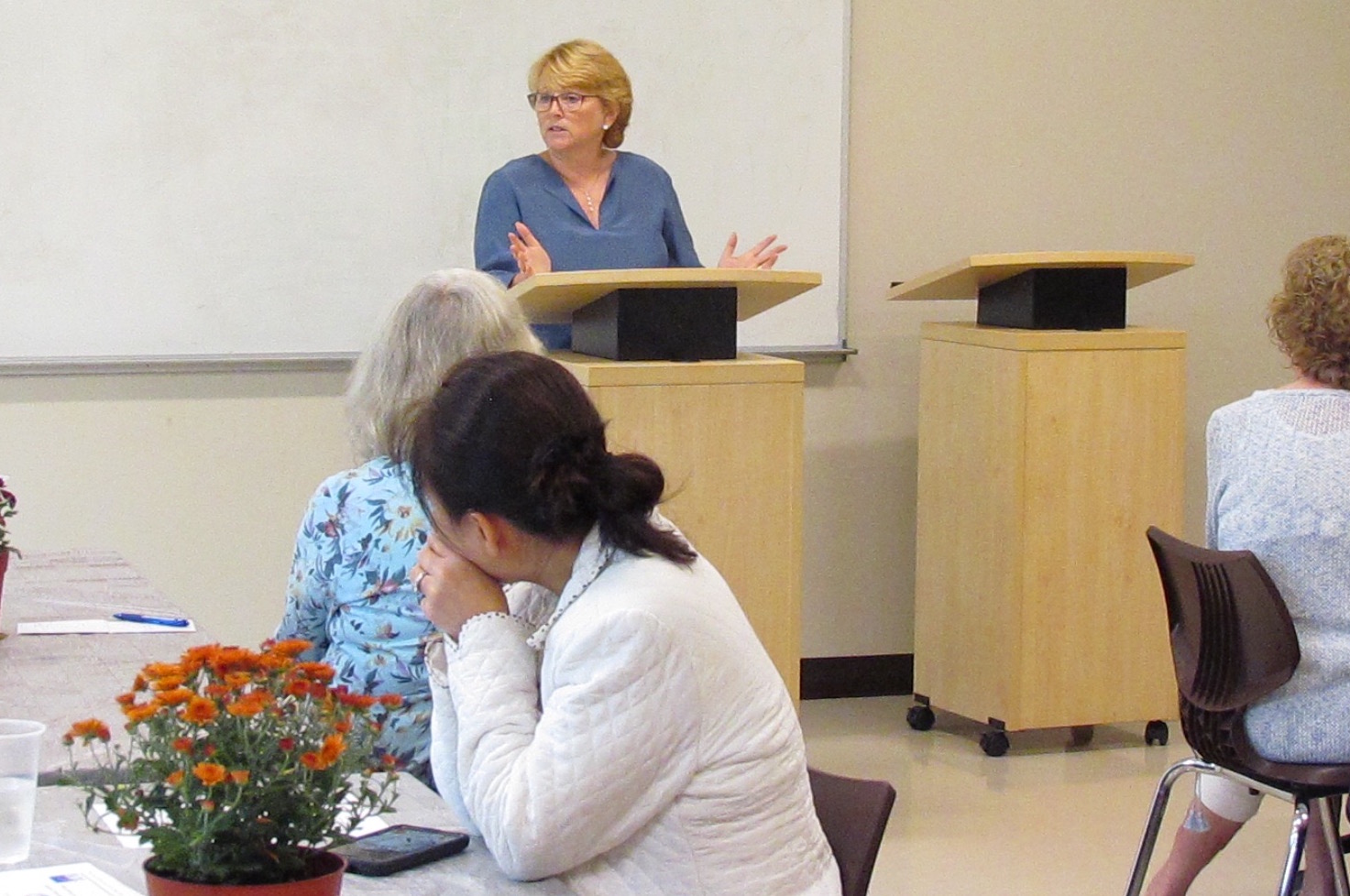 The Wilton League of Women Voters invited Wilton’s first selectwoman, Lynne Vanderslice, to give an update on what’s happening at Town Hall. She addressed the group at its first meeting of the year Wednesday, Sept. 12. GOOD Morning Wilton came along to hear what Vanderslice told them. It’s your chance to catch up on the Latest from Town Hall.

Infrastructure is a big priority for town officials.

Vanderslice says there are a number of projects currently “in play.”

How Does Wilton’s Economy Look

Vanderslice said that despite issues with Connecticut’s economy, there are some positive signs for the future of Wilton’s economy. She pointed to several commercial real estate developments in the works.

Most of the changes won’t impact the grand list this year because they won’t be completed in time.

“The last three Board of Selectmen budgets have averaged only a 1.1% increase, which is a slow down in the growth of what we had seen in the past. The Board of Selectmen has returned over $2 million dollars to the general fund in the last three years. A big part of that was because of labor savings. We’ve had a lot of vacancies, we’ve had a lot of change in personnel, which is not unexpected based on the length of service of our employees. A lot of them have been there for a long time. We knew that they were approaching retirement age.”

Vanderslice added that officials look at every vacancy and ask if it needs to be filled. There have been some labor savings but that can put a lot of stress on the other employees. “Everybody’s working very hard.”

Wilton’s pension is close to being fully funded. The town does an extra payment each time, and the current stock market level is helping. “If the market stays up, we’ll continue to be in great shape. But that will have a positive impact on us if we reach that fully-funded mark.”

But there are “huge concerns” about what impact of the loss of the SALT [state and local tax] reduction. Vanderslice says she worries that this may impact how the town reacts at budget time next May. [Changes to the federal tax law will mean less deductions for residents for state and local taxes.]  “People are going to get to April, their taxes will be done, and they’re not going to be happy with the result. And I’m very worried about what pushback is going to happen at the May annual town meeting.”

Wilton is also working collaboratively with other towns to look for opportunities for shared services. One particular area that officials are looking at is the possibility of a participating in a shared health insurance plan–right now Wilton is self-insured and medical insurance is the number one budget driver. Vanderslice is waiting for an evaluation of the state plan.

Turnout for town votes also dropped off from great turnout in 2016, to lower turnout in 2017, despite increased outreach to remind people about the Annual Town Vote.

The town is using social media more, although Vanderslice cannot correspond with people via Facebook.

The number of FOIA requests have decreased.

Vanderslice brought on Sarah Gioffre as coordinator of community affairs. She has been responsible for implementing See Click Fix and will be overseeing implementation of a new town website, which will be much more customer friendly.

Gioffre will also work with environmental affairs director Mike Conklin on a new campaign with Keep America Beautiful, and implement more initiatives with recycling and sustainability. The town will be rolling out programs on increased recycling, including resident education; and awareness about reducing the usage of plastic bags, plastic straws, plastic containers, and more;

Vanderslice is also looking into a putting together a traffic information session for residents. She’s aware of problems caused by traffic diverting to roads like Belden Hill Rd., Hurlbutt St. and more that have become commuter cut-throughs, and is keeping an eye on the State Dept. of Transportation proposed rotary on Belden Hill and Wolfpit Rds.

Vanderslice is also continuing to hold monthly “Lunches with Lynne” sessions for residents. She will continue to announce dates during her remarks at Board of Selectmen meetings, and notices for those can be found on her Facebook page as well as on GOOD Morning Wilton.