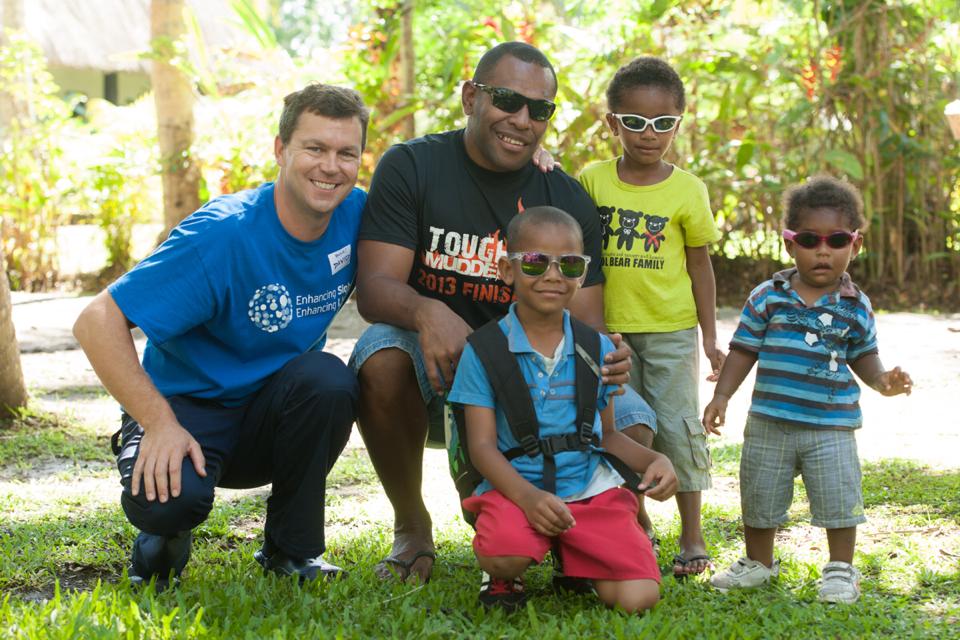 As he sat in the audience at his company’s annual meeting in Tuscon one year ago this month, Wilton’s Dave Cote couldn’t believe his luck. The twelve-year employee of Alcon, a global medical company specializing in eye care, was learning about a new initiative formed by the company’s Corporate Giving team.

Since 1964, Alcon’s Medical Missions program has supported eye care professionals in their work to bring eye care to those in need around the world.

“They said, We’re having a contest:  we’d like to give out two mission trips.” It was a way for them to share with the rest of us the type of work their team did in support of several organizations around the world,” Cote says. “Bells went off and I thought – Wow! That’s what I want to do! After the presentation, I went up to the speaker, Matthew Head – I made a beeline right for the guy and told him that I wanted to get involved.”

Energized, Cote began the application process as one of about 300 employees vying for two mission trip slots. He reached the finals as one of ten, and ultimately was chosen for the program, along with Amanda Dannemiller, a co-worker from Atlanta. (Due to a tie in the point system, a third employee, Jaedeanne Shaver of Fort Worth, will be taking a mission trip to Cambodia.)

After learning about the trip options available to them, Cote and Dannemiller chose to go on Alcon’s mission to Fiji.

“People say ‘Mission trip in Fiji?’ I didn’t even know where it was, but I’d heard of it,” Cote laughs. “I looked it up, found out they spoke English, saw that they had a wonderful facility led by dedicated directors, and chose it.”

In the months leading up to his trip, Cote reached out to friends and fellow Wilton residents, asking for donated glasses to bring with him. The response was tremendous.

“We collected sunglasses, prescription glasses, readers, and kids’ sunglasses,” he says. “There were almost 250 pairs. I literally had to bring an extra suitcase – couldn’t even be a carry-on! I can’t thank the people of Wilton enough.” On October 17, Cote boarded a plane for the longest journey of his life, ultimately arriving at The Mission at Natuvu Creek.

“The mission is truly off the grid. They run entirely off of a generator,” he says. “They charge batteries all day and run off them all night, so no electronics, no hair dryers, nothing. The sun comes up at 4:30 or 5 in the morning, and you’re up; it goes down around 7:30 and you’re done for the day.”

During his time there, Cote worked alongside Dr. Randall Goodman, a cataract specialist from Santa Monica. Mission staff members track surgical patients throughout the year, so when a specialist is scheduled to visit, word spreads quickly. Cote says they saw about fifty patients in the week he was there. Every single one, he says, left with a pair of the donated sunglasses he brought on the trip, providing vital eye protection for people who live on the water in a sunny area so close to the equator. The readers were given out as a post-op necessity for those receiving cataract surgery.

“One of my jobs was screening patients – the reason for their visit, medical history, any eye trauma – and I’d do eye chart exams with them,” Cote says. “I also tried to ask a little personal background of each one to ease their minds and calm their nerves.”

In the process, Cote says he learned to speak decent Fijian, as he wished his patients good morning, or thanked them for coming – he even picked up a few curse words along the way. What impacted him the most through those conversations, however, was the stories of the people themselves, and the ways in which surgery at the mission could not only improve their eyesight, but their lives as a whole.

“One man, Ponijese, was a 30-year-old former rugby player who wanted to be a high school geography teacher. Unfortunately, he had injured both his eyes as an athlete, leaving him with zero vision in one eye and 20/100 in the other,” Cote says. “Dr. Goodman was able to repair one as a ‘traumatic cataract’ and scheduled the other for a corneal transplant to be performed by a future mission team.”

The repair procedure was not without risk, and Cote says he rose early the next morning, eager to see Ponijese when he came for his post-surgical evaluation.

“He was one of our first post-ops, and I got to remove his patch. He blinked a few times, put his head in his hands, and started to cry. Then he looked up and said ‘I see you, David! I see your face!’”

An older patient, Temo, had been unable to perform his job properly for about a year due to his cataracts. He had been working as a chief building inspector. His employer was a contractor who builds affordable housing available to families through a rent-to-own program. Following a successful surgery, Temo addressed the entire staff at its regular morning meeting, thanking everyone for giving him back his sight.

“Here’s a guy who was going to be forced to retire. Now, he can work another ten years doing work for a really neat organization building homes for people who need them,” Cote says. “You think you’re only helping one person, but you don’t think about the rest of the people that affects beyond them.”

Cote arrived in Fiji this past October with zero expectations, open to whatever was ahead of him. Getting to know the people of the region, and experiencing firsthand the very real impact that could be made, he says, was something he will never forget.

“I didn’t truly realize the way in which when we help one person, how many people they can then help. That was the biggest thing I took away from it,” he says. “Ponijese can now study to become a geography teacher, supporting his wife and children and passing along his passion for learning to countless more children. Temo can continue to work and support his family while helping others become homeowners. It pays itself forward.”

Cote says he’s already spoken to the staff at The Mission at Natuvu Creek about returning with his family so that they, too, can share his experience. There is always a need, they assured him, and always more to be done.

To learn more about The Mission at Natuvu Creek, visit natuvu.org