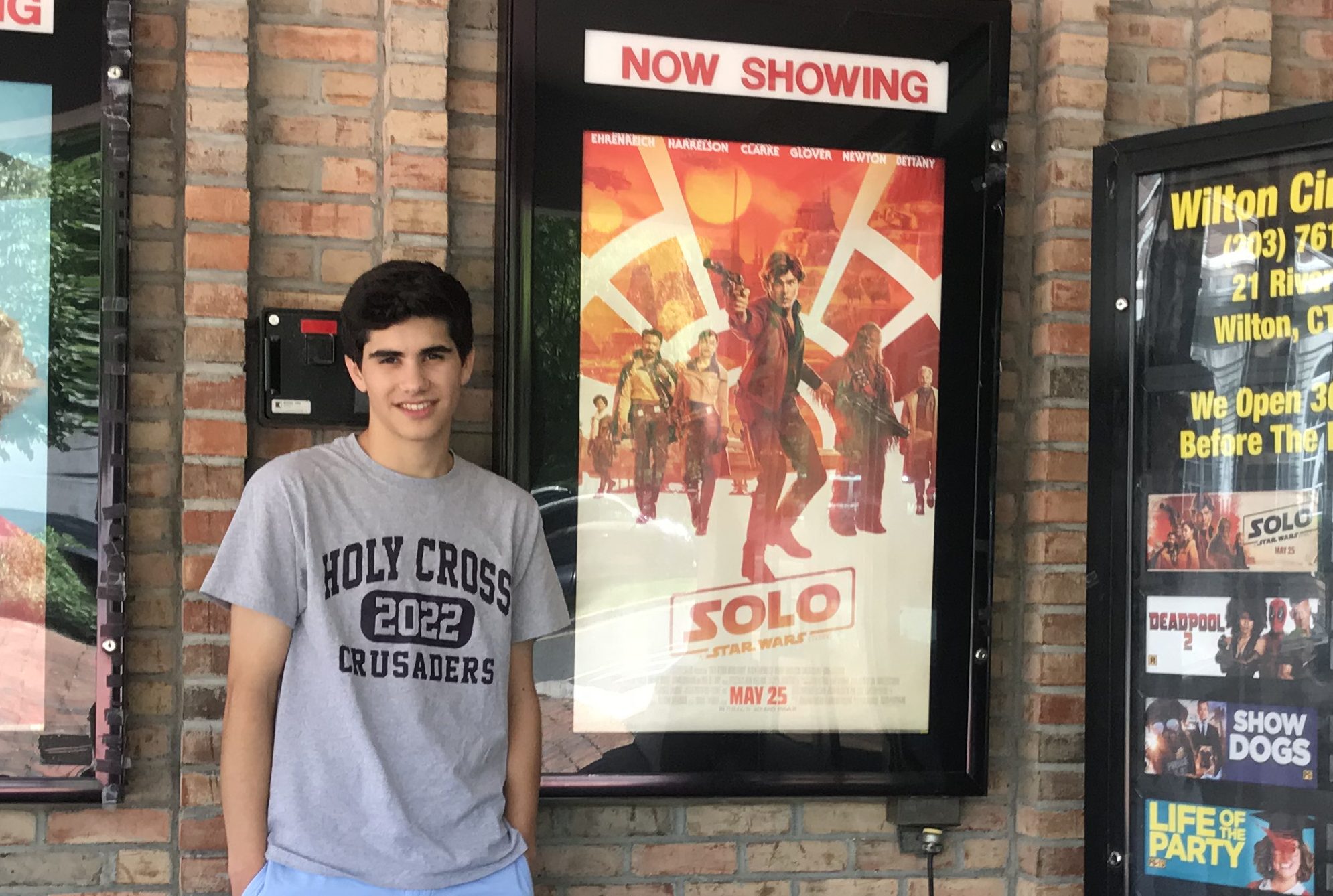 Solo: A Star Wars Story, now playing at Wilton Bow Tie Cinemas, is the 10th film in the Star Wars cannon, and the most recent release since The Last Jedi hit screens last December. It is a prequel movie that follows the iconic Han Solo in his early adventures prior to Star Wars Episode IV: A New Hope. In Solo, Han meets his eventual best friend, Chewbacca, flies the famous Millenium Falcon for the first time, and much more. Alden Ehrenreich plays a young Han Solo, and is supported by a great cast:  Donald Glover, Emilia Clarke, Woody Harrelson, Thandie Newton, and Paul Bettany, to name a few.

The movie starts out with an extremely exciting chase sequence on a lawless and corrupt planet, featuring Han Solo and his former love interest, Qi’ra (Emilia Clarke), who he was infatuated with prior to meeting Leia in the original Star Wars movies. The relationship between Q’ira and Han is bolstered by great performances by Ehrenreich and Clarke, both of whom are highly charismatic and have a likable charm.

In fact, all of the actors and actresses in the movie give solid performances, and Ehrenreich nails the familiar gestures, mannerisms, and vocal inflections of the character that Harrison Ford created. It’s definitely a bit odd seeing someone besides Ford take on the role, though, and for some, it may be distracting throughout the entire movie.

Personally, I wasn’t particularly excited for this movie specifically because I did not want to see an actor other than Ford take on the role. Harrison Ford is Han Solo, and vice versa. The character is far too iconic to mess around with like that, especially because people have watched Ford play the character for over 40 years. Ehrenreich does a solid job, but for me, he still isn’t Han Solo.

It’s not just the recasting of Han that makes the character feel off, though; the script fails to present him in a way that is true to his character in the original three Star Wars movies. At the beginning of Star Wars Episode IV: A New Hope (chronologically the first Star Wars movie ever made), Han Solo is not exactly a good person. When he helps Luke Skywalker and friends take on the evil Galactic Empire, he doesn’t do it to save the galaxy; he’s completely in it for the money, which he asserts at several points throughout that chapter. However, at the end of A New Hope, he comes back to save his friends and helps destroy the Death Star, redeeming himself and truly becoming a hero.

Based on what we know from A New Hope, at the point in time in which Solo takes place, Han should still be that selfish, money-grubbing criminal. However, in Solo, he’s oddly portrayed as a great and likable guy, who occasionally makes selfless and even heroic decisions. Sure, he still retains some of his familiar qualities; he’s cocky, in over his head, and a bit smug at times, but he’s not the scoundrel that he is in the original movies.

Lando Calrissian, however, is a different story. He’s played by Donald Glover, who really nails the role, and gives possibly the best performance of the entire movie. He perfectly captures the charisma and swagger that that Billy Dee Williams brought to the role in the original movies. I actually like Lando in this movie more than I did in the originals; he has a more significant role to play in this story, and Glover does a great job with all of his comedic beats. I actually learned more about Lando as a person because of this movie, which is fantastic.

I also greatly enjoyed all of the diverse locations, weird creatures, and scrappy little corners of the Star Wars galaxy that this movie showcases. The universe explored in Solo looks dirty and used, which is exactly the way it should look. It definitely recaptures the feel of the original trilogy, especially in its creature and set designs.

Han meeting Lando for the first time is a ton of fun, and is handled very well, but I needed more interactions between those characters. Lando doesn’t get nearly enough screentime in this movie, despite being the most well-represented character in the entire production. Emilia Clarke’s Q’ira is perfectly fine; she’s pretty likable and is a suitable love interest for Han Solo. I also like Beckett, played by Woody Harrelson. He’s very charismatic, and feels very at home in this universe.

The characters in Solo certainly have more personality than the characters in 2016’s Rogue One: A Star Wars Story, but they lack the depth of the characters in the original trilogy and even Episodes VII and VIII. Because of this, many of the moments involving these characters that should be emotional come off as flat and forced. None of the characters have any real development, either. Han is basically the same guy from start-to-finish, and he doesn’t change in any significant way. That lack of character progression for Han is a significant issue–if Han is not going to develop as a character, then why even tell this story at all?

The villains in the movie didn’t do much to capture my interest either. Enfys Nest, a villain with a unique-looking costume that sporadically shows up, is handled very poorly during the third act–in fact, the character didn’t even need to be in the movie. The last half hour also has several, highly predictable twists, and the movie fizzles out without ever having much of a climactic punch.

Despite the problems, Solo is certainly not a bad movie, and the majority of people who view it will enjoy it. I actually found the first hour-and-a-half to be very entertaining, with fun action and good banter, but the last 30 minutes somewhat tank the movie. They’re very tedious, and lack the emotional resonance that this film desperately needs.

Although the movie’s ending lacks the weight that I was hoping for, the heist that the characters are involved in is actually quite creative and clever, and it’s refreshing to finally get a Star Wars movie that isn’t exclusively focused on the “Rebellion vs. Empire” conflict. The famous Millenium Falcon gets several moments to shine, including a fantastic chase sequence through a dangerous area in space. There’s also a well-executed train heist sequence, which is highly exciting and has great special effects. Some of the action sequences are a bit difficult to see due to poor lighting, but generally speaking, the action is suitably thrilling.

Although I have mixed feelings about Solo, it seems the majority of people seeing it are enjoying it. It has an A- Cinemascore rating, a 70% Rotten Tomatoes critic score, and a 7.2 IMDB rating. I may be in the minority, but I think the movie is just OK. It does provide some laughs, some exciting sequences, and some fun character moments, but it definitely leaves a lot to be desired as a whole.

Despite its flaws, I do recommend that Wiltonian Star Wars fans see Solo at Wilton Bow Tie Cinemas. As mentioned, a lot of people are enjoying the movie, and I seem to be in the minority. It is a mostly entertaining film, but don’t go in expecting it to be perfect, because it’s far from it. The movie is definitely tailored to appeal to Star Wars fans, though, so if you’ve never seen a Star Wars movie previously, you might want to skip out on this one.