Home News Breaking News Nature in Wilton: If a Woodpecker Did Peck Wood, Would it... 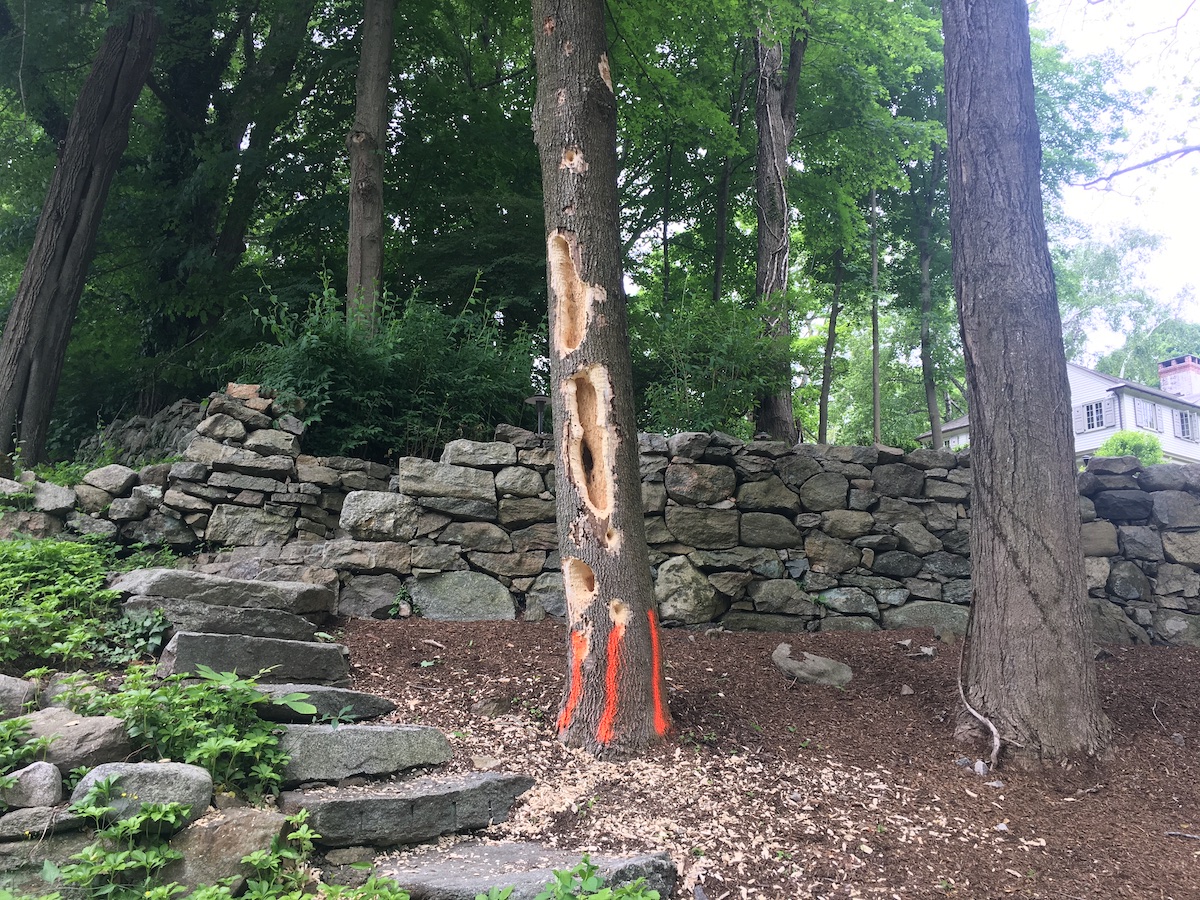 An overeager woodpecker may have single-beakedly put a Wilton Center tree on the town’s cut-it-down list–and in record time.

A little over a week ago a pileated woodpecker was spotted doing its thing on a tree at 15 Old Ridgefield Rd. in Wilton Center. Residents Rob and Peg Chiavon captured video of the woodpecker pecking at the trunk of the tree [see below], a dead sugar maple. After the video was posted to the Wilton CT 411 page on Facebook, another resident reported the situation to town officials via the SeeClickFix app.

Just nine days later, it’s clear how quickly a woodpecker can do enough damage to alarm Wilton’s DPW director Christopher Burney, who has arranged to have the tree cut down because of what the bird has done. 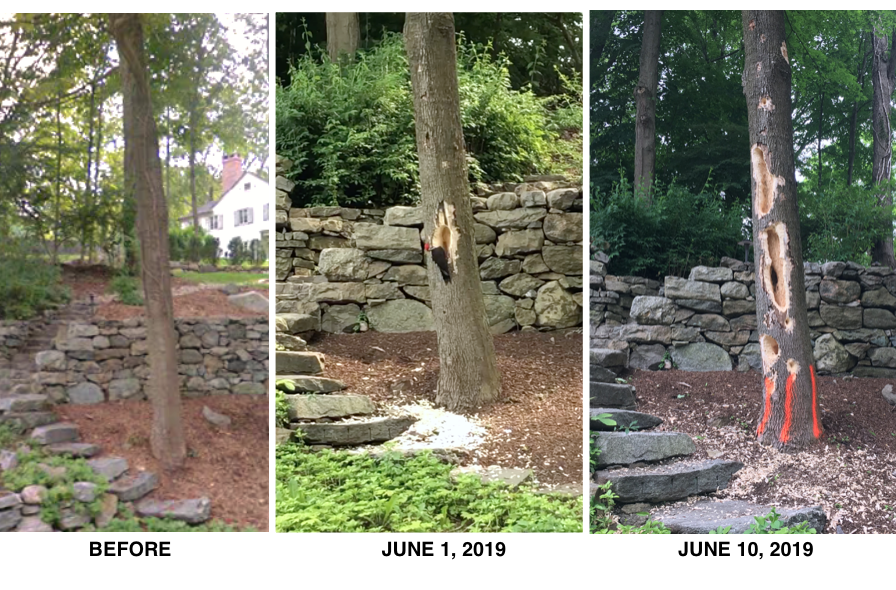 “It an emergent situation,” he says Monday afternoon, June 10. “We are going to try to get the tree down in the next 48 hours.” In fact, later that same day, the tree service contracted by the town reported that the removal is tentatively scheduled for Tuesday. 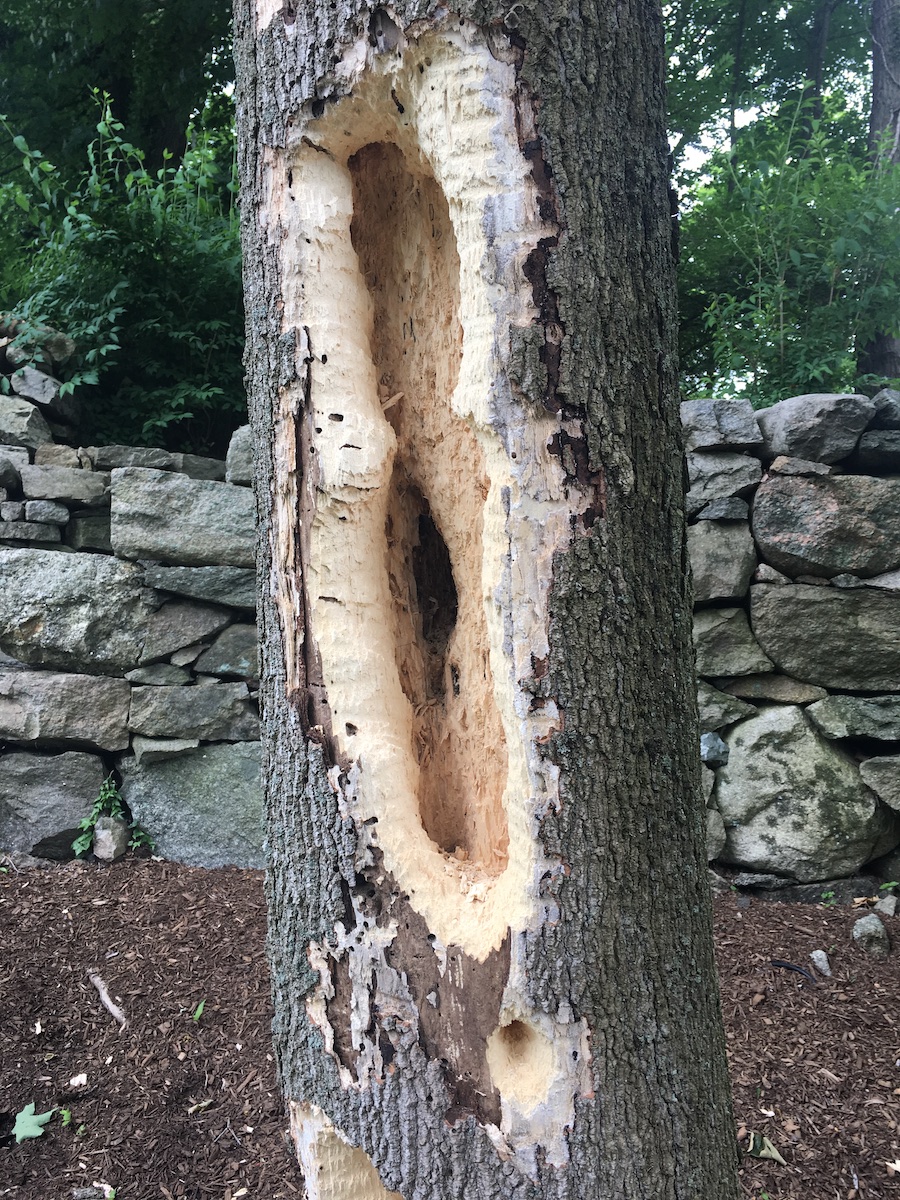 Tree warden Lars Cherichetti says he’s seen this behavior before and isn’t surprised. “Once the pileated woodpecker finds a spot to feed, they come back twice a day, three times a day, sometimes more than that, and work on it. I suspect there are carpenter ants in there and the woodpecker found where the larvae are, and it’s going to town.” The rotting, softer wood of the dead tree only makes it easier for the bird to get to its meal.

Cherichetti says the damage caused by the woodpecker thus far wouldn’t necessarily put the tree in immediate danger of falling, but it does expedite the need to remove it. The fact that it’s dead, with more brittle limbs and branches threatening to fall onto wires over the roadway makes it a definite candidate for removal. “It would eventually just fall over,” he adds.

Cherichetti did make sure to check that the woodpecker wasn’t nesting in the tree before approving its removal. “Those are just feeding holes,” he says.