This article was a collaboration between GMW‘s senior interns, Grace Bracken, Lily Kepner and Reed O’Brien.

As the weather warms and graduation approaches, the academic motivation of high school seniors universally wanes. Wilton High School has found a way to combat this phenomenon with the Senior Internship/Interest Project (SIIP). This program, which allows seniors to participate in an unpaid internship or create a project of their own, enables students to step outside the classroom to discover and channel their passions into meaningful, unique work.

Although most of the senior class is eligible to take part, a student must maintain a 2.0 cumulative GPA, have no credit loss for the entirety of their twelfth-grade year, have a passing grade in all classes and complete all necessary forms by required deadlines in order to participate. These requirements ensure that the internship program is a privilege that must be earned.

After meeting these requirements, students have the responsibility of finding an internship with help from a compiled list of interested businesses and organizations. Their choice must be approved by a faculty member that serves as the internship advisor, who ensures that participants spend approximately six hours a day for five days a week working on their projects or at their internship site. At the end of the four-week program, seniors present their work in a Senior Symposium for parents, teachers and community members, which this year will take place in the WHS Cafeteria on Wednesday, June 12 from 6-7 p.m..

GOOD Morning Wilton’s interns reached out to their classmates who are eagerly participating in some particularly interesting work. 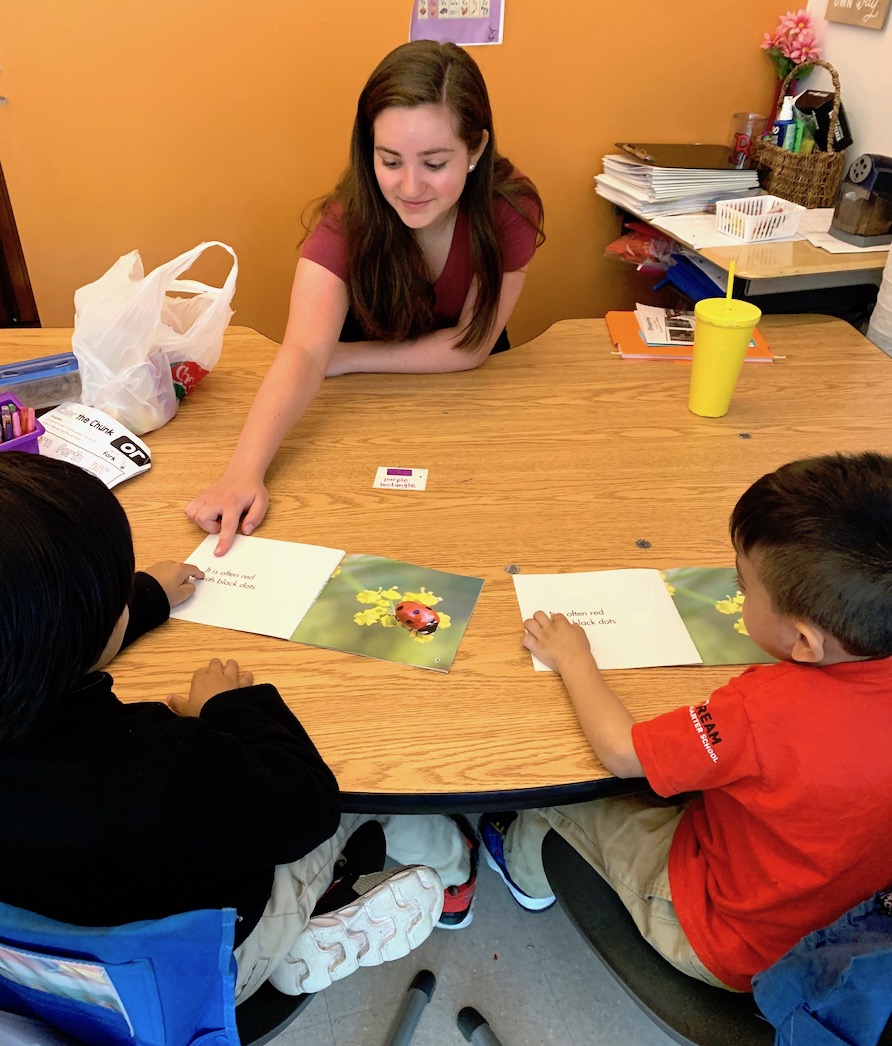 Emily Assef is an intern at East Harlem’s Dream Charter School, a school chartered by the New York Department of Education to address the community’s educational needs. Assef came into contact with the school through her father, who had served as a volunteer chair member for the last two Dream Galas, the school’s annual fundraiser.

Assef chose to intern for Dream in preparation for college. An intended sociology major at American University, she wanted to experience the socialization of young kids while immersing herself in the city life that she will experience in Washington, D.C this fall.

As a teacher’s helper, Assef spends her time in a kindergarten classroom assisting with tasks like organizing the room and providing extra one-on-one help to the students that need it.

“I’m having my first experience as an authority figure, as well as experiencing the way these children are brought up in schools,” she explains. At Dream, she’s seen a level of discipline instilled in the children that is less present in Wilton Public Schools but that is necessary for students who aren’t taught these types of skills by their parents at home.

When asked about the most rewarding part of her internship, she spoke of the appreciation shown by her students. On the first day, she was warned about a closed-off student with behavioral issues that had trouble connecting with other students and teachers. Assef explained it had been difficult to get this student to like her until she ate lunch alone with him and he surprised her with a hug. Assef learned how much of a difference she can make for the kids through little efforts to reach out to them.

To donate to Dream Charter School visit the school’s website.

Eleanor Imrie and Teena Moya aren’t just working to help improve one organization; these two motivated and passionate seniors are actively working and researching to better the Town of Wilton as a whole. Wilton Go Green welcomed these two seniors aboard to help spread the group’s message and increase awareness of environmental friendly strategies Wilton citizens can employ.

Moya and Imrie both came to this internship extremely motivated. Imrie decided to intern here after volunteering at the annual Zero Waste Faire this past March because she “loved the energy from each station and wanted to further this interest.” Moya was similarly inspired  after learning about environmental degradation in AP Environmental Science. “I became aware of the impact of cars, waste, laws, and people on the environment and it terrified me. I wanted to learn more about what I can do in my community to make a difference,” she says.

Wilton Go Green has proven a remarkable outlet for their passions, allowing them to research and learn more about the quality of the Wilton Transfer Station and how to persuade businesses to join the “Skip the Straw” Campaign. Imrie and Moya have also travelled around the area to learn how to best reduce their environmental impact and encourage others to do so, such as touring BD Provisions in Newtown, where they learned the advantages of buying food in bulk. “It felt like I was really educating myself on a new level,” Imrie reflects. This newfound knowledge did not just remain in their brains; the two seniors also spent a great deal of time making graphics and crafting posts for social media to promote environmental consciousness among individuals in the community based on their findings.

Not only have these past few weeks sparked community change, but personal changes as well. “My whole lifestyle is changing,” Moya remarks. Imrie plans to study Environmental Community and Planning at the University of New Hampshire and she says this internship experience has inspired her to continue educating people about the environment on campus as well.

Prop N Spoon assists the Broadway, film, television, business, and retail communities with any and all types of set, prop, or production needs. Von Bartheld found the company through a personal connection, and knew he had to pursue an internship there, no matter the distance.

His days usually start at seven o’clock in the morning and last until 4 p.m., though he admits in his first two weeks he often voluntarily stayed overtime to assist. As the company’s only high school intern, Von Bartheld’s days are long, but he could not be more excited. “Every day is different,” Von Bartheld remarks, “I’m loving it.”

On his first day, Von Bartheld was tasked with cleaning off the clay from the original Sesame Street lampost, after a mold was made for a plastic replica that could travel with Big Bird on his 50th anniversary tour. Since then, Von Bartheld has done projects small and large:  from applying tape on the strings of three oversized tennis rackets before they were painted blue for a Ralph Lauren Display, to filling 155 wooden hexagons with a total of 11 yards of concrete and loading them on 19 trucks to go to a display sponsored by Audible in Newark’s Washington Park. This week, one of his favorite activities was taking apart an old rotary phone and tweaking it slightly for a museum exhibit on King Kong–thrilling in the responsibility of his own, individual project.

With future plans to attend the Rochester Institute of Technology, Von Bartheld hopes to pursue Industrial or Product Design. He remarks that this experience has “reconfirmed that this is what I want to do.”

“All these massive displays that you see, even if they’re only up for three days, they took weeks for people to design and build and put together and install. You don’t really think about the people behind it, and it’s just really cool to see behind the scenes,” he says. After absolutely loving being a part of the building process, Von Bartheld is excited to pursue a similar path in the future. 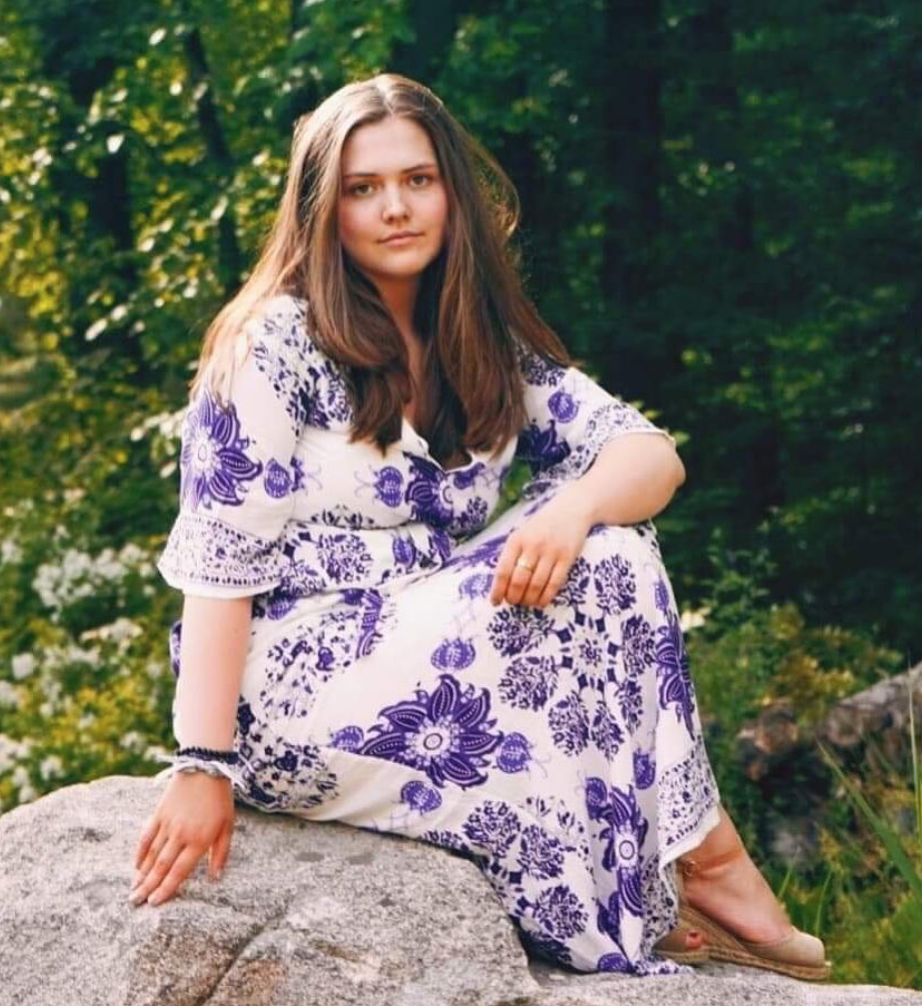 Hannah Mikita is interning for Mona Rey Sinha, a fellow senior at Wilton High School who already has her own business working with classical musicians and artists around the globe. Hannah wanted to pursue this internship as it allowed her to start building her own career as a classical singer. She had seen Mona’s Instagram page and saw how she was able to market classical music artists.

As an award-winning opera singer, Hannah was interested in learning the business side of the arts, to understand how to combine the artistic side of her passion with using Instagram as part of the business model. While working with Mona, she says she has become acquainted with social media analytics–algorithms, using hashtags, choosing between videos or photos, and video editing. She’s learned that a big part of this is content creation and trying to keep viewers and fans interested.

While learning about how to present herself, Hannah has also helped write articles for Mona’s website and blog. She also helped Mona produce a benefit concert last weekend to support the Wilton-based cancer organization Circle of Care, interacting with multiple musicians and planing details for the venue.

Unique about this internship for both girls is that they’ve been able to work with someone who is a peer. “It’s great to bounce off ideas with each other. We’re friends and it allows for creativity and being candid with each other,” Mona says. “Since I’ve been running the businesses for a while, I’ve had to work with people that are older than me. It’s very refreshing to have someone who is my age.”

Hannah’s goal from this internship is to grow her own Instagram account and to continue working with Mona afterward–and to keep putting herself out there. “You see classical musicians getting more and more jobs based off their social media, and that this method is very underutilized. In 2019 you can build your own brand and get anything out of that.”

Nick Furst and Davis Langhoff created a Senior Interest Project to write and perform original sketch comedy. Langhoff explained that he felt limited with the internship options available and wanted to create an environment that would be as fulfilling as possible in his last four weeks before graduation.

With four years of experience in Wilton High School’s improvisational troupe under his belt, he teamed up with Furst, co-writer of this year’s Senior Show Getcha Prom On! and sketch contributor to Late Night Wilton in 2018, to make his dream a reality. The boys spend their time brainstorming and writing and will eventually rehearse the sketches and memorize lines for a live performance open to the public. The show will feature Furst and Langhoff as well as other experienced students in the theater department–Ava Kaplan, Will Maggio, Jake Vitarelli, Olivia Vitarelli and Andrew Tsantilas. George Murphy and Andrew Kelso will perform stand up comedy as well. Furst looks forward to “sharing [his] joy with everyone else” during the performance, as he and Langhoff have kept the content of the sketches to themselves to prevent spoilers.

When asked about the creative process, Langhoff explained a tenet of improv comedy called “explore and heighten,” which is when a concept or occurrence is exaggerated to the extreme. Although hesitant to reveal greater details about their comedy, the boys explained that improv knowledge has helped them write. Furst and Langhoff are excited to pursue comedic writing and acting in college in whatever way possible.

Their free performance, entitled “Food in the LLC:  A Night of Sketch Comedy,” will be held at Trackside Teen Center on Thursday, June 13 at 7 p.m..