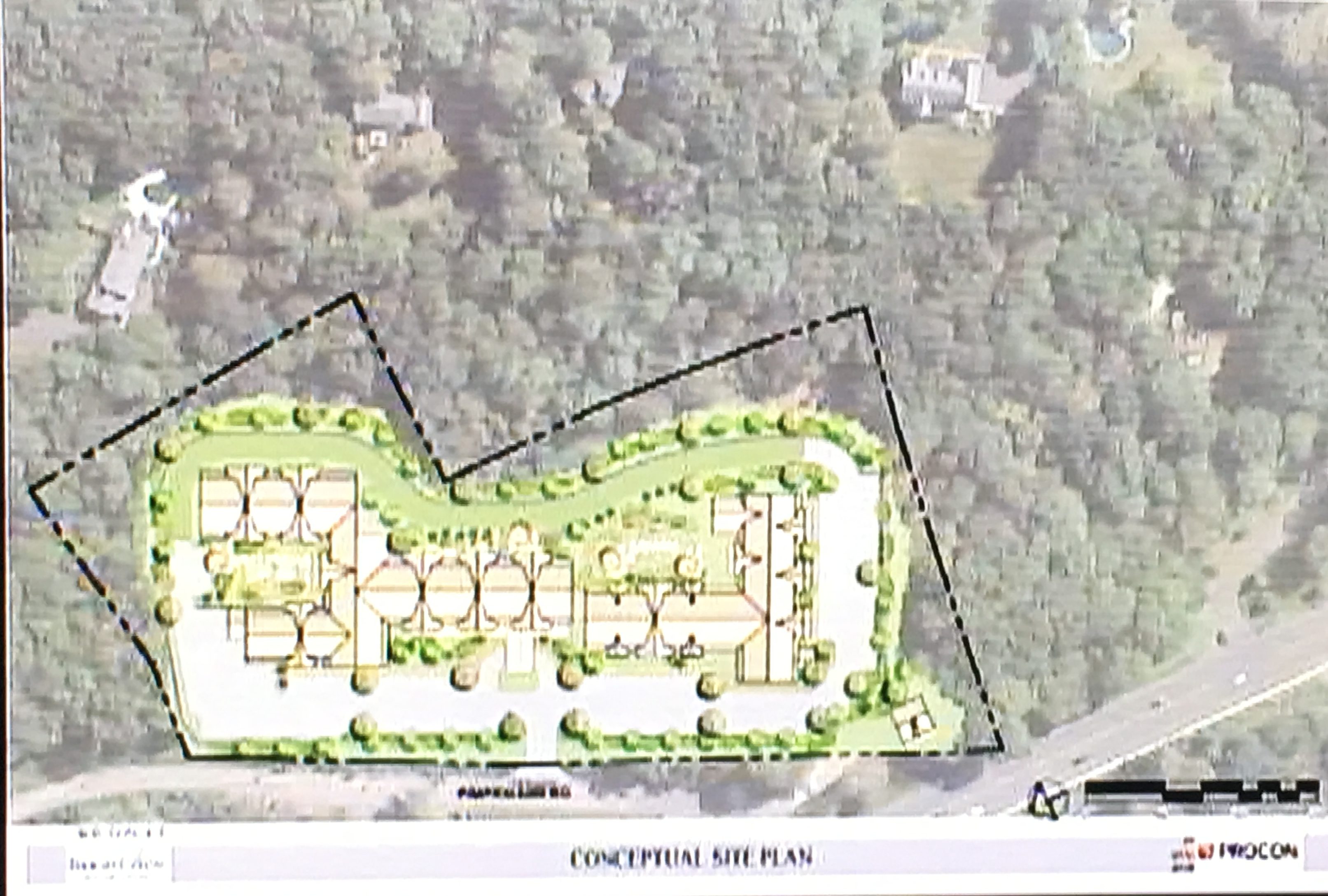 At last night’s Board of Selectmen‘s meeting, representatives from Brightview Senior Living presented plans for a senior living development project they hope to build on 6.91 acres at the corner of Pimpewaug Rd. and Rte. 7/Danbury Rd.. Brightview is already under contract to purchase the privately-owned properties at 2 and 24 Pimpewaug Rd. where the project would be developed; they were at the BOS meeting to discuss the offer they submitted to the town to purchase the small .209 acre sliver of town-owned land attached to 2 Pimpewaug Rd. at the edge of the property.

The tiny patch of land is the town’s right-of-way (shown in green, below), but Brightview wants to purchase it in order to have frontage on Rt. 7, according to Steve Marker, the company’s development associate. After a review from an independent, third-party appraiser, Brightview has submitted an offer for $75,000 to the town for the land. According to first selectwoman Lynne Vanderslice, Brightview’s executives have met with town officials from several departments including herself and town planner Robert Nerney, and no one sees a need for the town to continue owning that small triangle of land.

The proposed development would be a senior living community comprised of three combined types of senior living facilities–independent living, assisted living and memory care–which Marker explains will “allow seniors to age in place and not have to move from the community as their needs change.”

According to Marker, the project meets a need Brightview has identified in the region, and specifically in Wilton. The company, which currently owns and operates 36 similar projects between Virginia and Boston, has already opened one facility in Norwalk and has another property that will open in Shelton next year. They hope to create a “cluster” of senior living communities throughout the CT and NY area, and are “very excited” about their development in Wilton.

“Senior living is a rapidly changing environment. There have been traditional nursing home and continuum of care. [Brightview] is all on a rental model, so there’s no large buy-in for residents to have to pay, which makes it more attainable for residents to become part of the community. What we’ve seen in Norwalk is there is huge demand. We’ve found the demographics and population in Wilton to be very attractive and to show strong demand going into the future,” he said.

Brightview’s model is different than other senior living projects in two major ways. First, the company combines independent living with assisted and memory care, so “our residents can move in and then stay with the caregivers they’ve built relationships with as their needs change, they may progress from one piece of our community to another” Marker says. The second difference is that the project is rental, rather than requiring a large, often six-figure buy in entry point for residents than other senior living facilities require.

Of the total number of units offered, Marker said there would “probably” be 90 units of independent living, 50 for assisted living residents and 25 for memory care. The facility would offer studio, one and two bedroom units and monthly pricing would range from $4,000/month for independent living, to $5-6,000/month for assisted living, to $8-9,000/month for memory care, incorporating meals, housekeeping, programs, and transportation, and–depending on needs–additional levels of care, like bathing, dressing, and medications.

One area of concern is the traffic at the intersection where the project would be located. Connecticut Dept. of Transportation (COON-DOT) has said no to installing any kind of traffic light to aid drivers who want to turn from Pimpewaug to Rte. 7 and the section of roadway is badly lit at night. Already problematic, the topic about an increase in traffic from the development was mentioned at the meeting.

“It’s something that came up with every meeting–with town officials, neighbors–we would love to improve the intersection any way that we can. We understand concerns about making a left turn. We can’t put a traffic light unless CONN DOT approves, but they don’t see the need. But we can improve the lighting to make it safer and more visible in the evening. We would be open to other improvements as well, whatever we can do without needing CONN-DOT’s approval,” Marker said.

He added that the average age for residents is 82 years old and “very few are driving.” Marker said that most of the car traffic is from staff and visitors and during the heaviest employee shift (7 a.m.-3 p.m.) there is typically 30-40 cars from visitors and staff. “There’s not a heavy traffic use, and it’s something we’re very cognizant of, how we can improve the traffic and not make it more congested.”

They also acknowledge wanting to be “good neighbors” within the neighborhood, adapting the esthetics of the development to fit what is customary in the community. What appeals about this particular site is that it allows access to the main thoroughfare but doesn’t “intrude” into a residential area.

“Want to come and become part of the community and build relationships rather than infringe because we will be here a long time. We don’t build and sell, we grow in the number of opportunities. We like this location on a main road but tucked in and not impose a tall building in a community that’s low scale. It’s important to build off of the surrounding communities not build something that stands out,” Marker said, adding that Brightview would welcome the opportunity to work with an architectural review board. “It always results in a better building. Every community is different.”

Marker added that representatives have met with neighbors whose properties abut the land to address some possible concerns, including noise, visibility and activity levels–and have adapted the plans following neighbor feedback.*  “The back was going to be a big drive, but we came up with the solution that has access to fire trucks if needed, but made it more green.”

In addition, Marker said that Brightview has discussed the project with representatives from the Wilton Historical Society. The land Brightview intends to purchase was once owned by the Gregory family, one of Wilton’s founding families. There is a historic structure on the 2 Pimpewaug Rd. parcel that was once a Gregory family residence, and Brightview’s plans include preserving and restoring the building.

“We intend to preserve the home and, working with the historical society, to create an exhibit that talks about the family and the history and their impact on the town,” he explained, noting that the building would likely be used for programming for residents of Brightview as well as offered to community non-profits as a place to hold meetings. “We want to build a relationship with the Historical Society to help develop an exhibit that is sensitive to the history of Wilton.”

First Selectwoman Vanderslice called that potentially a “big win for the property,” noting that this was a case where a developer was “eager” to save the house before even going through the Planning and Zoning Commission (P&Z) approval process.

Marker added that the timeline for the development is eyeing a 2019 or 2020 close on the purchase of the parcels, something dependent on the approval process. “We’re contract purchasers, all contingent with our approvals with the town.” As part of that process, he said there would be traffic studies done.

To consider the purchase offer of the town-owned .209 acre, the selectmen unanimously voted to approve an “8-24 referral” to P&Z, something they are legally required to do. The state statutes mandate that the BOS has to refer any kind of municipal improvement matter to the town’s planning board for review. If town officials decided to move forward, before formally accepting the offer and signing a contract they need to hold a minimum of one public hearing and post public notices including a physical sign on the site itself.

In addition, they also voted to refer the purchase offer to the town’s real estate committee for feedback on whether the offer price of $75,000 “makes sense.”

*Disclosure:  A GMW editor is the owner of a neighboring property.