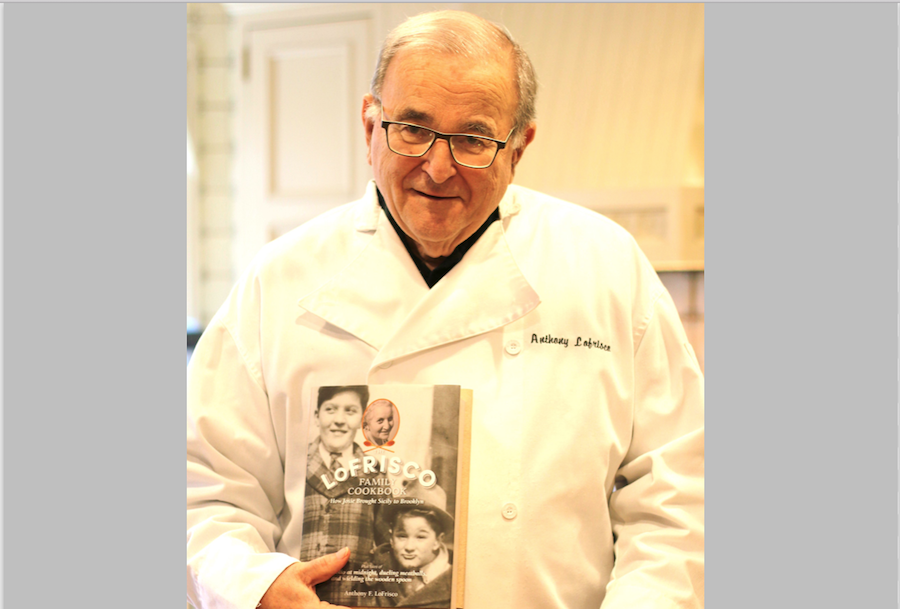 Anthony F. LoFrisco, a longtime Wilton resident before moving to Shelton two years ago, died Sept. 1, succumbing to cancer after a brief illness. He was 87.

A widower, he was married to Eleanor Merkel LoFrisco for 39 years until her death in 2002. They had four children–a daughter and three sons–who survive.

The family settled in Wilton from Stuyvesant Town in Manhattan in 1971, first on Indian Hill Rd., then on Cider Mill Pl., the parents frequently entertaining relatives and friends and taking part in community life.

LoFrisco, a Brooklyn native, enjoyed a long career in the legal profession as a partner and litigator at prominent firms in Manhattan, with General Electric among the corporate clients he represented over many years.

By avocation he was a cooking enthusiast, having written reflections and compiled recipes for The LoFrisco Family Cookbook: How Josie Brought Sicily to Brooklyn, a tribute to his mother, published in 2016. Publisher’s Weekly called the volume a “love letter to Italian cuisine” and “a welcome trip through time.”

Born and raised in the Dyker Heights section of Brooklyn, LoFrisco was the son of Frank, a New York City policeman, and Josephine, a stay-at-home mom. His birth date was July 13, 1933. He attended local schools–P.S. 201 and St. Michael’s Diocesan High School—before studying at Fordham University in the Bronx and Fordham Law School in Manhattan.

As a young lawyer, LoFrisco took on a challenge. He heard a lecture by Jesuit Father Robert Drinan who said black men in the South associated with the civil rights movement were unjustly imprisoned. Joining a small group of volunteer lawyers, LoFrisco went to Mississippi for a month to offer pro bono legal assistance.

In one notable confrontation, and at personal risk because of the hostile racial climate, LoFrisco successfully negotiated with the police chief of a small town to arrange for the release of 12 prisoners, using street-smart New York thinking to convince the unwilling chief to do so. The prisoners’ supporters cheered their release, as described in the opening chapter of a biography of Father Drinan on his influential advocacy as a congressman and educator.

LoFrisco began his legal career as an attorney in the General Services Administration in Washington. When he returned to New York, he established a practice that gained prominence as an advocate for travel agents across the U.S. In later years as a litigator for firms that included Lovejoy, Wasson; Breed Abbott & Morgan and Winston & Strawn, LoFrisco did significant work for General Electric, Cox Cable and other prominent corporate entities.

During his early years as a Wilton resident, LoFrisco served on the town Planning and Zoning Commission.

The LoFriscos were members of Silver Spring Country Club in Ridgefield for more than 40 years.

In the year prior to his final illness, LoFrisco was preparing a wide-ranging memoir that featured tales of his friendship with, among others, Jack Welch, the legendary General Electric leader, Bob Wright, who led NBC Universal, and prominent businessman and Home Depot co-founder Ken Langone.

LoFrisco is survived by his daughter Louise and husband Christopher McKenna of Old Greenwich; son Anthony, Jr., and wife Lauren of Westport; son Frank of Manhattan, and son Thomas and wife Mary Anne of Southlake, Texas. He also leaves ten grandchildren: Anthony III and Lenora of Westport, Ned, Ellie, Thomas, Hallie, George and Leo of Westlake, and Christopher and Sean of Old Greenwich.

According to his wishes, there was no wake or funeral service. Burial was at Bald Hill Cemetery in Wilton.