Home Community Oh, the Places He’ll Go! Spencer is Indeed a Member of... 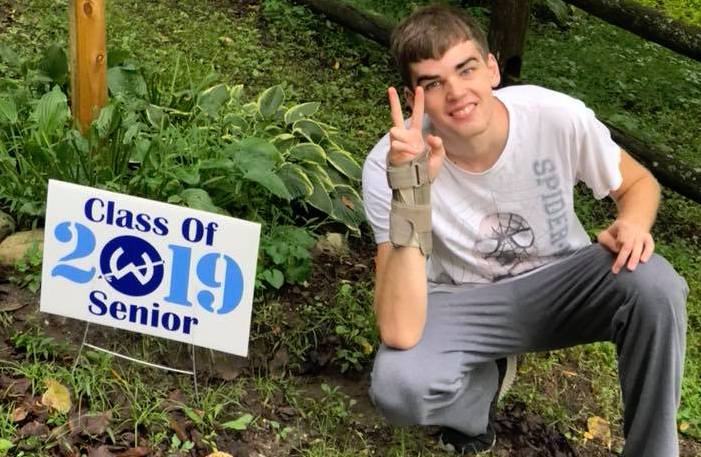 Many of you know my son Spencer. You won’t find him in the halls of Wilton High School because he attends Foundations, a school in Milford for kids with intellectual disabilities. It’s a wonderful school and has been the perfect placement for him for many years now. This year Spencer is graduating. He’ll be 21 years old at the time of his graduation because, as a child with intellectual disabilities, he’s allowed to remain in school until this time.

He might be several years older than the rest of the Class of 2019 and he might not be donning a cap and gown and receiving his diploma in Wilton but nevertheless he is indeed a member of Wilton’s Class of 2019.

At first I hadn’t considered getting a lawn sign. I felt somehow it wasn’t appropriate. But then I started to think about what this symbolizes. Like his other Wilton classmates, Spencer has worked hard at his studies. For him that probably looks a little different. He didn’t take chemistry or calculus, but he’s learned addition and subtraction and how to calculate sales tax and determine how much money he has to buy groceries. He’s learned to use Pea Pod and other apps that will help him as he ventures out into the world. In his life skills classes he’s learned to do his own laundry, cook and other important activities that some of my friends admit their neuro-typical kids still haven’t mastered. He’s learned enough about how the various branches of our government work that he can make an educated decision to vote. This year, he’ll be working on using public transportation and how to schedule an Uber since won’t be driving for many years if ever.

Spencer won’t be heading off to college like many of his peers but he’s worked hard over his school career to be ready to head out into the world to find a job. Finding a job for people like Spencer isn’t easy. According to the U.S. Bureau of Labor Statistics only 18.7% of people with intellectual disabilities are employed. It’s not because they don’t want to work but simply finding an employer who’s willing to take a chance on them is difficult. As a parent this is a scary proposition as Spencer wants to work and takes pride in doing a good job not to mention the fact that he needs to earn an income.

When I came home with the lawn sign, Spencer couldn’t have been more excited. He immediately texted everyone in his contact list to tell them and has proudly told everyone in the neighborhood about it. While his achievements might seem small in comparison to other graduating seniors, to us they’re monumental. And we couldn’t be more proud of who he’s become.

Alison Jacobson is a Wilton parent and life coach who advocates on special needs issues. She’s also the CEO of First Candle.