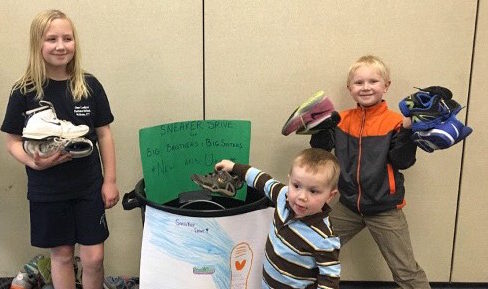 With the help of Our Lady of Fatima Youth Ministry, the OLF athletics department is coordinating a community-wide effort to honor the memory of local hero, Tyler Ugolyn, by collecting new and used sneakers to be donated to Big Brothers and Big Sisters charity organization.

Both the sneaker drive and the basketball tournament honor OLF graduate Tyler Ugolyn, who perished in the Sept. 11, 2001 Terror attacks. Ugolyn was a distinguished student and accomplished “Fatima Falcon” athlete. He was a friend to everybody, very bright, altruistic, and magnanimous. After graduating 8th grade in 1993, Ugolyn went on to Ridgefield High School and Columbia University. It was there that he founded Columbia Catholic Athletes while playing Varsity basketball, and ran an inner city youth basketball league for Harlem children. He was an active volunteer for Big Brothers and Big Sisters, too, and organizers say Ugolyn would be so happy that the community he called home is following his example and giving to those in need. Before he died, Ugolyn was known as an incredibly gifted person, both on and off the basketball court, whose talent and brilliance was outmatched only by his generosity and selflessness.

“I consider myself very fortunate to be a Fatima Falcon. We really take our motto of Service Over Self seriously–and so did Tyler,” says 7th grader Anais Salageanu, who is both a basketball player and a member of the church’s Youth Ministry program. “He would really happy we’re doing this,” adds 2nd grader Emma Pidel, who is a member of OLF’s Pep Squad cheer team and also participates in Youth Ministry. “I’m too young to play basketball, but I’m not too young to share what I have and be kind. I want to be like Tyler Ugolyn!”