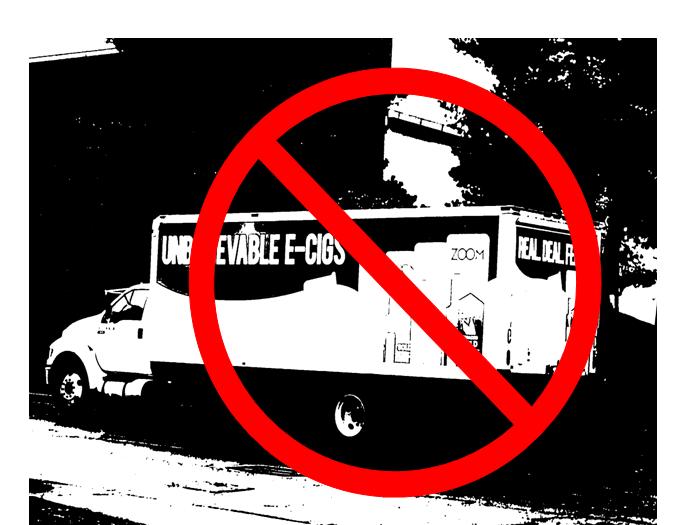 Spotting a large 18-wheeler truck parked in front of Wilton High School was one thing. But the fact that the truck was covered with advertising for e-cigarettes was a whole other thing entirely. And last week wasn’t the first time she had spotted the truck.

“I’ve seen it multiple times. Many, many times, over the course of the whole school year. It has always caught my eye because it seemed so out of place in front of the school. It was either on Rt. 7 near the tennis courts, I’ve seen it parked by Catalpa Rd., I’ve seen it parked on Kristine Lilly Way, right underneath the high school walkway,” Klink told GMW.

Not only that, but her son, a high school sophomore told her that he had noticed the truck with the e-cig ads too.

“He’d even said, ‘Mom, it’s so wrong that it’s at the school. How ironic.’ He said he and his friends have spotted it and wondered if they’re trying to advertise to the kids. Even he knows it shouldn’t be around the kids. It’s just the opposite of everything they’re taught in school about cigarettes and gateway drugs.”

Klink wondered why such advertising–especially around kids–was allowed. When she spotted the truck it was often parked at the school for long periods of time too. “It just seemed so blatant. Why would they just be sitting around for no other reason? It’s always in a very prominent, visible place.”

Whether or not the truck was purposefully there to advertise or to actually deliver something, it didn’t sit well with Klink. “The problem with e-cigarettes is that they are targeting kids. They claim it’s for smoking cessation or to smoke without the smell and the nicotine. But the refills have flavors which appeals to kids. I’ve read how the chemicals are really bad, most especially for kids.”

Given how aware many kids are these days of the dangers of smoking–thanks in large part to messages they’re receiving in school health classes and at home–Klink found the ad was too much of a mixed message. “They get warned of the dangers, but then enticed by the lure of it. It’s in video games, it’s in movies. They don’t need it at their school. School has got to be place where the no-smoking message is across the board–it’s dangerous, it’s unhealthy. We don’t need a truck there stating the opposite.”

Last week, she decided she’d had enough. Her first call was to police to ask if anything could be done, but they directed her to the school and the trucking company. She discovered the truck was one used by a company that’s a vendor for Chartwell’s, the schools’ food service provider.

“If they deliver food products to the school, why are they using these trucks? We should have one that says something positive about food. It’s just unnecessary.”

When she reached out to school administrators, she found sympathetic ears in the form of WHS assistant principal Linda Lyall, who also didn’t like the idea that the truck was so visible and prevalent around the high school. Lyall agreed that school was no place for a truck with that ad, explaining that she’d also been trying to find out who the truck belonged to and how to stop it from coming to the school.

“To Linda’s credit, she talked to me about it,” explained WHS principal Robert O’Donnell. “We contacted the Chartwell’s director. I certainly would prefer not to have a truck delivering to our school that seems to be advertising tobacco products. We are a tobacco-free campus and that it was delivering here was a concern.”

Turns out, Brian Reynolds, director of Chartwell’s was the guy to talk to. He hadn’t known about the e-cigarette ads until Lyall brought it to his attention so he did some investigating of his own–and put a stop to it.

“The truck is one of our supplier’s, J. Polep, and they have a list of schools and other delivery sites that require a truck without logoing on it. They weren’t specific about what logo it would have but it will not have e-cigarettes on it. They said going forward the truck that shows up won’t have any cigarette advertising at all.”

He agreed that school was no place for the ads. “That’s not an image for kids. It’s a very simple thing to reach out an have them make a change for us.”

As for why the truck would have sat for so long outside the school so frequently, it may not have been so purposeful–or nefarious. Reynolds explained that food delivery services are given limited, specific time windows when they are able to deliver to the schools, so that they don’t interfere with the school buses. “They might get to the school during a bus run, so they may have to sit for half an hour waiting for the buses to finish.”

Hearing that her phone calls to the school were successful and that the truck will likely not make another appearance at WHS made Klink pretty pleased.

“It’s wonderful news. I’m so glad they’re working so quickly on it and it’s good that they’re aware of it now. That makes me happy,” she said.