Home Community OP ED: ‘If I Die, What Happens to My Son?’ 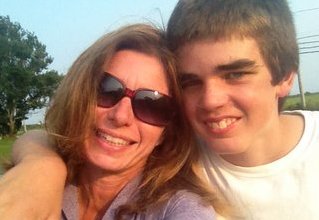 This past Thursday, I was one of over 300 parents of children with intellectual and developmental disabilities from around the state who convened in Hartford for the second annual Family Lobby Day. We were there to tell lawmakers of the dire circumstances our families face if funding for the Department of Developmental Disabilities wasn’t increased.

The families spoke in front of the IDD Caucus, a bi-partisan group that was formed last year by Sen. Beth Bye, Rep. Jay Case and Rep. John Hampton to “fight for the interest” of people with developmental disabilities. Also on the committee is Rep. Gail Lavielle. I’m so grateful to her for her support in advocating for all families with special needs and making this a top priority. I also learned that over a third of the state legislature has joined this caucus and it gratifies me to see that our lawmakers understand that we must quickly help one of the most vulnerable populations in our state. The issue at hand is not only the size of the budget but how it is being allocated. Currently, the majority of the DDS budget is used for individuals who are in state-run institutions and group homes which cost significantly more money than private, non-profit community based agencies. One in particular, Southbury Training School, was designated for closure in 1986 and has not accepted new residents since then. But, Southbury is still operating although the number of residents is dwindling. Currently, there are still 935 state workers and 318 residents. The cost for these 318 residents? $350,000 per year, per person! It’s important to note that all 318 residents have been given the opportunity to move into group homes or other approved residences of their choosing.

Because of the vast percentage of the DDS budget being allocated to these state-run institutions and groups homes, there are currently 2,000 families in Connecticut who are on the waiting list to receive funding for residential support services for their children. It’s important to understand the severity of the situation. Many of these adult children can’t walk, can’t speak, can’t even attend to their personal needs. Many require round the clock care and, very often, that is the sole responsibility of their loving but exhausted parents. These families, many of whom are in desperate situations, are told there’s absolutely no money to help them unless there’s an “emergency.” An emergency is defined by the state as the death of the parent. That’s it – not a stroke or heart attack or simply the fact that these elderly parents are exhausted and frail. This waiting list will continue to grow.

Several weeks ago, I had the opportunity to meet with some of these families in person. I wept listening to how these loving, kind parents who are in their late 60’s and have worked their fingers to the bone, struggle to carry their fully grown adult children up and down stairs. How they’ve sacrificed their other children’s education because they could not afford college for them. I heard their utter fear contemplating what would happen to their child should they have a stroke or a heart attack or break their hip falling down the stairs.

Like me, they work long hours to pay for therapy, housing and support. Undoubtedly I will need to be doing this for the rest of my life. But, underneath it all I have a fear that is always at the back of my mind. What happens if I can’t? What happens if I die? What then happens to my son?

I feel blessed that my son is quite self-sufficient and able to care for himself. He loves cooking and he gives great back rubs. He loves meeting his friends for pizza, watching movies and he loves swimming at the Wilton Y. In other words, he’s like so many other teens out there with interests and hobbies. All I want for him is what every mom wants for their child – to be happy. I want to be at peace knowing that when I’m gone he will have a wonderful life where he’s safe and cared for. While he will never be able to live alone or drive a car, he could certainly be a productive member of his community.

How do I look my son in the eye, as he hears his sisters talk about their future and tell him I have no idea what his future looks like?

Logic needs to prevail and the system must be fixed! I’m not asking for more money to be put in the budget, I’m simply asking for the budget to be allocated in a fair and equitable way. That’s not politics, it’s common sense.