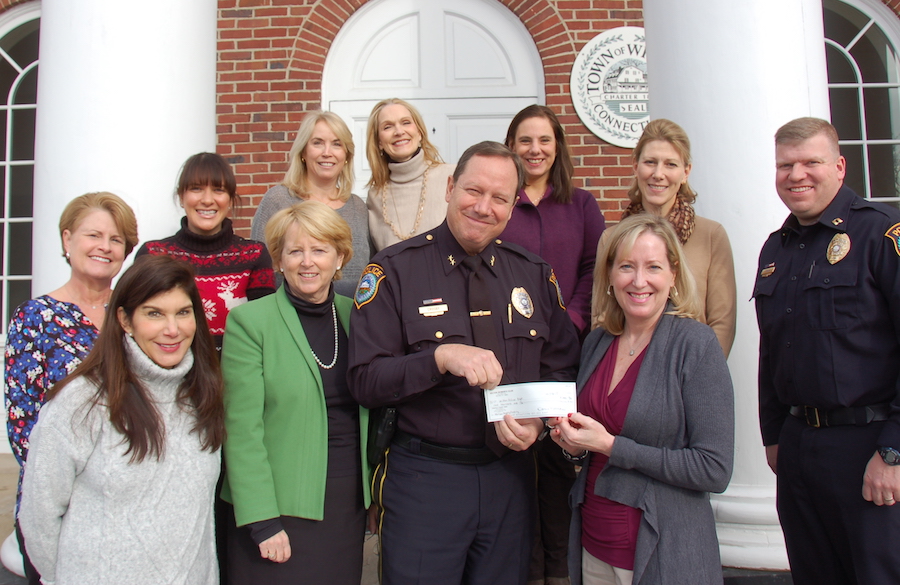 The State of Connecticut recently passed a law mandating that towns in CT have their first responders carry Narcan, an opioid overdose antidote, and be trained on its use. However, the mandate wasn’t handed down with any kind of funding, nor has Wilton budgeted anything for its officers to comply.

Now, thanks to a generous donation from one civic organization, Wilton police officers will be able to comply. On Tuesday, Jan. 10, the Wilton Woman’s Club presented the Wilton Police Department with a $1,000 donation to fund the purchase of naloxone, or Narcan, for each police car in the department.

Opioids include both heroin and legal prescription medicines such as Vicodin, Percocet and OxyContin. It was reported in 2010 that enough prescriptions were written that year to keep every adult in America medicated around the clock. Opioid overdoses have skyrocketed across the country and in Connecticut.

“We are so glad to receive this donation. We always appreciate it when a private group steps forward to donate, when otherwise we would have had to cut into the town budget,” Police Chief Robert Crosby said. “Some people might think $1,000 does not sound big, but now that we do not have to fund the Narcan ourselves, we can put that money to use to purchase other equipment to help Wilton residents. And hopefully, knock on wood, we never have to use the Narcan.”

The Wilton Woman’s Club is partnering with the Wilton Youth Council this year to fight against substance abuse, including the abuse of opioids. Wilton Youth Council has fought substance abuse for over 30 years, and last year held a special panel to educate town residents about the dangers of opioids, the importance of cleaning out medicine cabinets, discarding unused painkillers, following doctors’ directions about when to stop taking medicine, and preventing family members from using these drugs when not prescribed.

The WYC will be the club’s sole beneficiary of this year’s annual fundraiser, which will take place March 30, 2017 at Rolling Hills Country Club. Last year, the WWC raised $35,000 at the fundraiser, which it donated to the Wilton Loop of the Norwalk River Valley Trail.

The Wilton Woman’s Club will hold a drive in late February to provide different locations where Wilton residents can discard expired and unused medicines. The Wilton Police Department already provides a secure box in its lobby for this purpose, that residents are encouraged to use anytime.

“I hope people do not feel there is any stigma to dropping unused medication at the Police Department dropbox,” Crosby said. “They are doing the responsible thing by getting rid of these legal medications once no longer needed.”