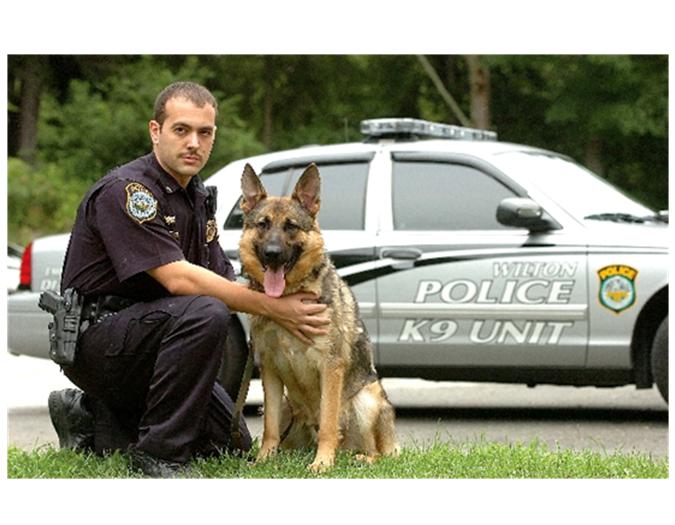 It’s one thing when Fido begs for scraps at the dinner table. It’s completely another when that dog helps save people’s lives–specifically, people in Wilton. That dog shouldn’t have to beg.

But begging, or perhaps more appropriately, making a really strong plea, is what Police Chief Michael Lombardo, is now having to do. He’s hoping he can appeal to residents to help financially support Wilton’s K-9 unit, consisting of police dog, Enzo, and his human partner, Officer Stephen Rangel, and potentially save it from the budget chopping block.

Lombardo said the program costs approximately $22,000 a year to run. He’s hoping to fund that mainly through private donations and support. Otherwise, the only way Wilton can maintain the K-9 unit is through the Police Department’s budget that he presented to the Board of Selectmen for the 2014-15 budget season. As of now it’s in there; during the presentation he made to the BoS, Lombardo tried to make the case for why the K-9 unit is important. Whether or not the selectmen choose to include the program in the budget they take to the Board of Finance or cut it outright is, as Lombardo said, “up to them.”

There is some level of support the chief is hoping to be able to access for the unit through something called the Federal Asset Forfeiture program.

“We have funds that we have seized, whether it’s from drug arrests or other ways. A portion of what we seize comes to the local police department. It’s a nation-wide program.” Lombardo has asked the police commission to allow some of those funds to pay for a portion of the K-9 program.

Nevertheless, it would still be great if the town residents could help through donations to support the costs associated with Enzo, Lombardo said. He explained that he could cite several specific times where Enzo made the difference in the successful solving of a case.

“He saved a woman’s life this year–he was able to track a woman who had done harm to herself, and there’s no doubt in my mind that she would have died if he hadn’t have been there to track her as quickly as he did. It was nighttime, it was a large area to search. If we had to have called for another K-9 unit from another town, it could have been 45 minutes to over an hour to get somebody here,” Lombardo explained, adding that would likely have been too late.

It’s not the only time Enzo has made a difference, according to the chief.

“There was another time he located an elderly woman who had been missing for a good part of the day; we were able to locate her before any of the elements or the weather caused her any harm. He was involved in approximately 30 field arrests and searches for drugs. He’s been able to track the scent of people who have stolen something and run out of a store. We’ve made arrests, we’ve recovered stolen property as a result. He’s been a great tool for us, really a great asset and we really want to continue the program as long as we can,” Lombardo explained.

In the meantime, he’s hoping that private citizens would consider taking that worry off his plate and contribute to fund the program outright.

“I’d love to be able to sustain the program through donations, and not have to go to the town for any funding. That’s turned out not to be the case. Our funding has dwindled significantly and we just need funds to sustain that program.”