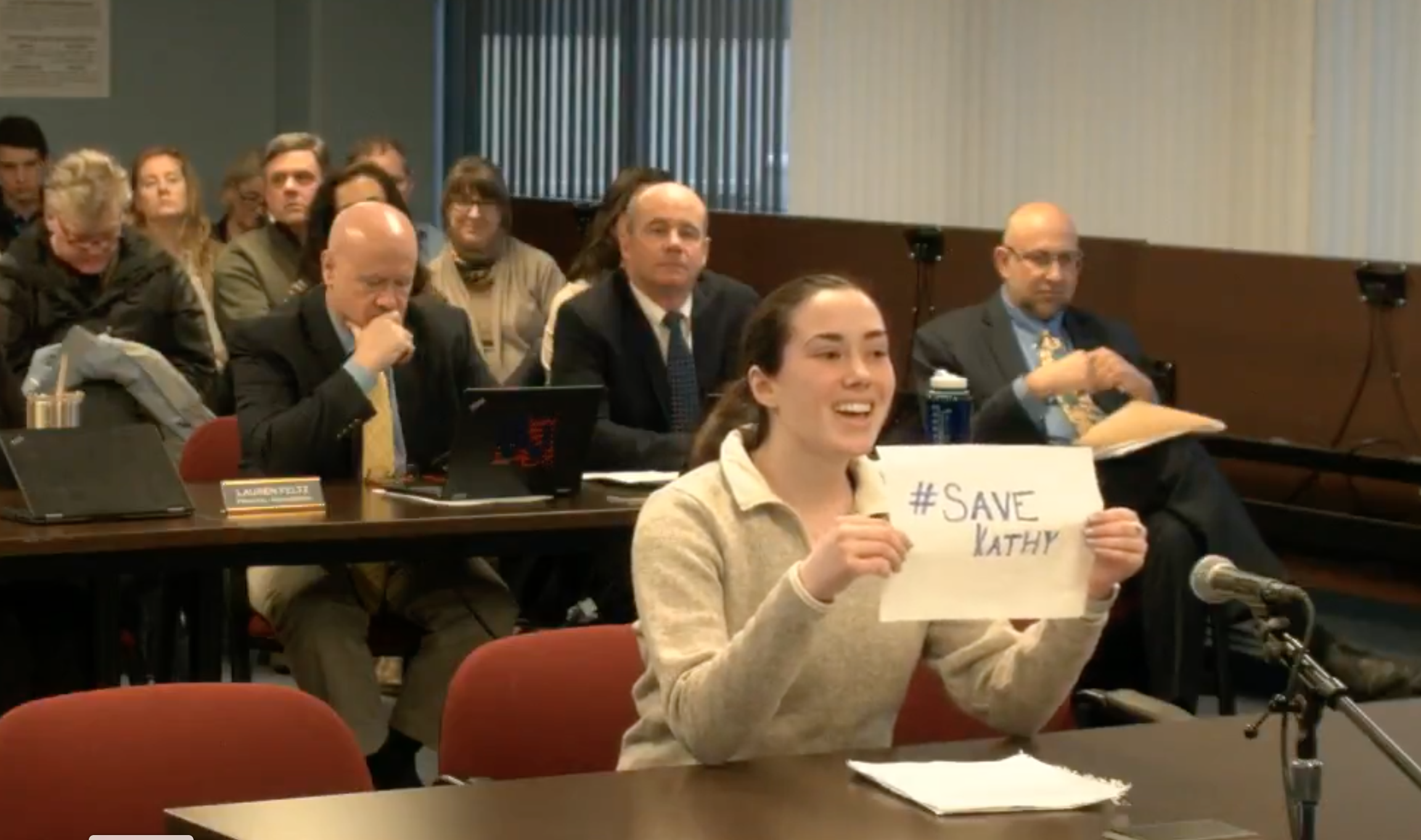 If they had been listening to the members of the public who addressed the Board of Education meeting Thursday night, Wilton teachers John Rhodes and Kathy Soderholm would have heard their supporters among those speaking during public comment. Both are much-beloved by students, graduates, parents and members of the community, but the teachers’ situations and the reasons why their supporters were at the BOE meeting couldn’t be more different.

One teacher had members of the community there to ask the BOE to rename the WHS Little Theater in his honor and hang a plaque commemorating everything he has done over the last 40-plus years for the district; the other teacher saw parents and students trying to save her from being fired after having been told her contract will not be renewed at the end of the school year.

Rhodes will be retiring at the end of this school year after dedicating 50-plus years to music education, more than 42 of them to building an incredible music program in for the Wilton School District. Several speakers applauded his contributions to the music curriculum and performances over the years, all with the mission of asking the BOE to honor Rhodes’ work in a meaningful way.

Naming a building or a part of a building after a person is difficult, however, ever since the BOE adopted a new policy on naming district facilities in 2016. That policy states:

The BOE adopted a related policy for nomination and induction into the school district’s Hall of Fame. It is strict in its requirements of recognition, achievement and contributions.

“John reached into the heart of my two kids and pulled out a lifetime love of music that continues to this day,” said Brian MacDonald. “Music is a lifetime, something they can do their entire lives. John has impacted more children over 42 years in our system, not just in our school but in this community. John is the reason my children love music, and John has done the same thing for thousands and thousands of kids. We put Tom Fujitani’s name on the football stadium, David Clune’s name on the Clune Center. Now with the stroke of a check we can put up Bankwell, Blue Buffalo. Think about the message we’re sending our children–the way you get your name up there is to simply write a check, rather than spend 42 years positively impacting the children in our town. I realize there’s a policy, but policies are there for guidance. There’s a time for exceptions. Honor John in a way that is warranted and wholly deserved.”

Ryan Biberon, a WHS junior, said, “I’ve played saxophone for six years now. Every single one of those years Mr. Rhodes has been helping me. He’s been there not only as a teacher, but as a friend to me. It’s hard to find that with a teacher. He’s not asking for it and he doesn’t know we’re trying to do this. I never expected I’d come support a teacher, but Mr. Rhodes is worth it.”

Another former student credited Rhodes with her own extensive career in music. Mary Bozutti Higgins said, “Music has been a huge part of my life. I couldn’t think of a more deserving or gracious way to honor a man who has touched the life of thousands of musicians in such a profound way. I was a student of his in high school composition and music theory classes. From that I went on to major in music education and voice at Northwestern and I earned two masters degrees at Boston University in opera and in voice, and my high school years under his tutelage and mentorship that propelled my career on that path.” She credited him with creating the “building block” music education that spans 5th grade through high school, as well as creating the renowned marching band.

Higgins concluded, “I think the Little Theater should be named for him because it’s the only way to honor a man who has spent 50 years shaping the lives of so many people in Wilton.”

As for Soderholm, there were fewer speakers there to speak for her, but they represented more than 1,000 who had voiced their support in the preceding 36 hours, asking the administration to reconsider ending her contract. News had spread quickly that Soderholm had been told she was being fired for “unprofessional behavior,” and a petition was quickly started to “save” her from being terminated.

Alexandra Curtin was one student who came to the BOE meeting to speak on Soderholm’s behalf. “She is a person who has opened her arms to hundreds of students, as evidenced by these petitions,” Curtin said. “Personally, I can speak to how amazing a teacher she is. She spends so much of her free time just helping the children. She has a full schedule with students crammed into her schedule, which shows how much students love her. She would be sorely missed.”

Curtin held up a sign that read, “#SaveKathy” at the close of her remarks and several other times as others spoke in favor of Soderholm.

Junior Andrew Kelso spoke of how Soderholm was overwhelmed when he came to WHS in 2015. “I feel like she is there for me, and cares about everyone in the high school. She is one of the few adults in the high school that brings a special and inclusive atmosphere. I would not be as confident to speak about my opinions if it were not for her.”

After public comment was over, a bit later in the meeting Superintendent Kevin Smith referenced the public comment in his own report. He acknowledging the unusual turnout of so many people who came out to speak so passionately on behalf of the two teachers in reference to the recent budget cutting done by the Board of Finance to the proposed FY’19 BOE budget.

“In the business of budget planning and managing a very complex organization, it’s easy to lose sight of the kids we serve and the teachers who serve them. I’m so grateful for all of the folks who took the last 25 minutes to express their thoughts about a really fine music teacher. As we are thinking about the challenges we face in continuing to finance a world class education system, we have to hold those thoughts in our mind. This is what happens when financial pressures come to bear on school systems–the first things that tend to go are arts and music programs,” he said, adding, “Those folks help me to be reminded that at its core it’s human work, and we have very fine human beings doing that work.”