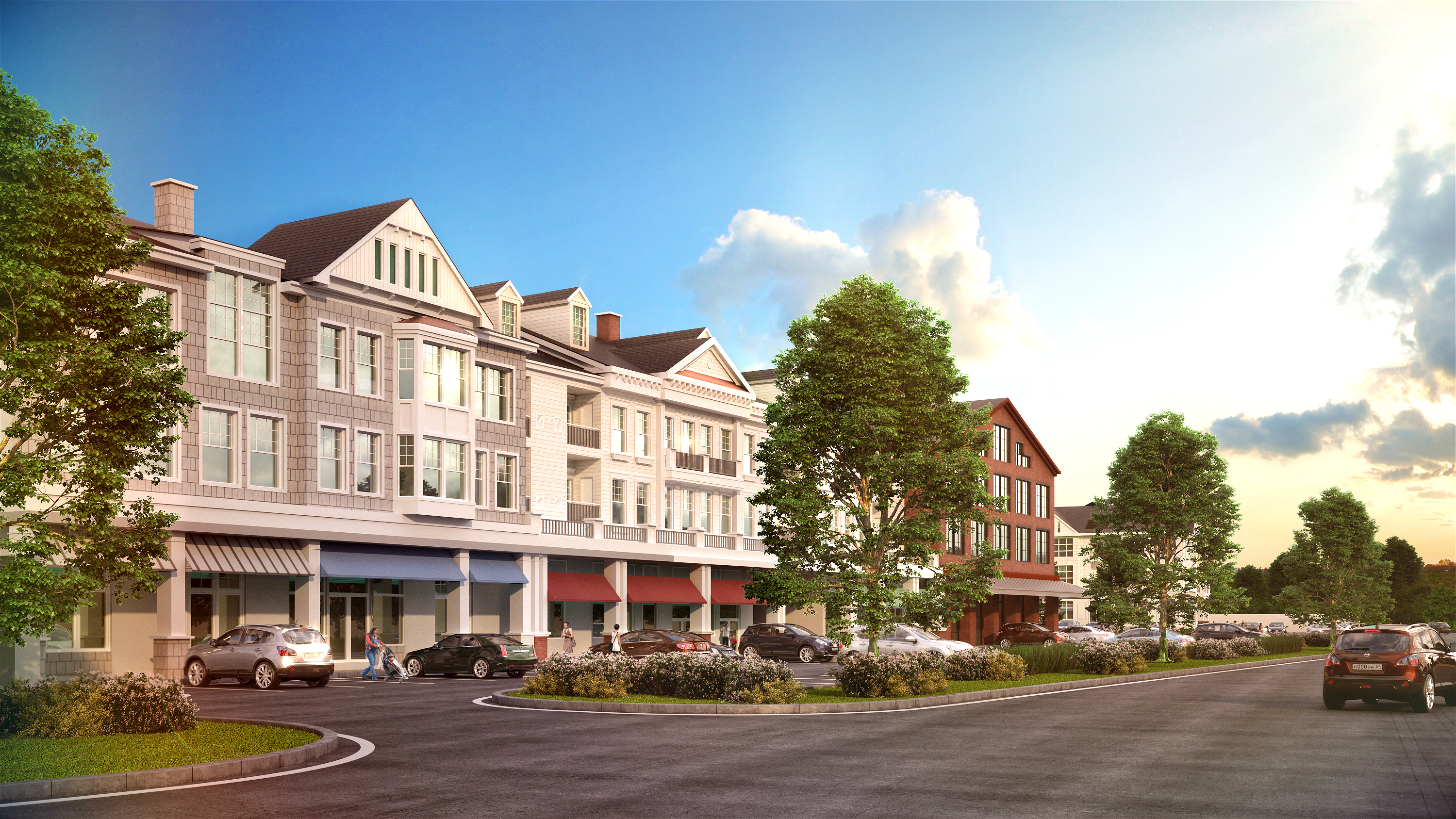 The proposed Wilton Heights Development will have its first public hearing at tonight’s Planning and Zoning Commission meeting (Monday, June 25, 7:15 p.m. in the Town Hall Annex). The hearing will likely draw several impassioned members of the public, who are already speaking out both in support and against the mixed use, retail/residential project being eyed for the current Crossways Plaza at the intersection of Danbury Rd. and Ridgefield Rd. (Rtes. 7 & 33).

The hearing is the first step in P&Z’s review of an application filed by Wilton Heights LLC, which is seeking a zone change for three residential lots adjacent to the plaza at 3, 7, and 11 Whitewood Ln., from Residential (R-1A) to Wilton Center (WC) District.

There is a separate application in front of the Inland Wetlands Commission, because the property includes wetlands; a public hearing for that is scheduled at the commission’s next meeting on Thursday, June 28.

The proposed development includes two buildings that will be designed to appear to be five separate structures in a downtown setting. There are two and one-half stories of residential space above one-story of neighborhood type retail that will be broken into 5 to 10 separate businesses. There are 74 residential units currently planned. Retail parking will be in front and on the sides and residential parking will be hidden from view under the buildings. Some of the structures are touching, which the developer has said adds to a village appearance.

With the controversy over the 183 Ridgefield Rd. parcel now in Wilton’s rearview mirror, attention has turned to this development. Advocates and opponents have started speaking out–and each side has started a petition online.

The petition in support says, “Wilton requires new capital investment and now is the time to work closely with interested parties to build [our] tax base, attract new businesses, and keep our older residents in-town by diversifying our housing stock. …  The Wilton Heights project, as proposed, will provide a significant tax increase for the town on an underutilized property that sits mostly vacant and has been for sale for over ten years. This project will be built by one of the most respected development teams in this region and the property already has town water/sewer, is already zoned for mixed-use construction, and will highlight the connection between Wilton town center and Route 7 for the 30,000 vehicles that pass by each day. More residents in and near our town center means more customers shopping in our shops and dining in our restaurants. Supporting this type of smart development will positively impact Wilton’s economic vitality and its future. That is what everyone wants. Lastly, if our Planning & Zoning Department denies this and other viable projects that have merit, then it will be sending a horrible message to the investment community: Stay away from Wilton!”

The petition against reads, “The wetlands at issue in the above titled application include wetlands on the currently residential zoned property of 3, 7 & 11 Whitewood Lane and include a stream and wooded habitat that is home to a myriad of creatures and native plants. These creatures live in and around the wetlands and forest on the Whitewood Lane property where they breed, feed and nest. The proposed development is the placement of a high traffic facility within/adjacent to a natural area with significant wildlife habitat. The proposed pavement extensions and walking paths will result in loss of wetland acreages. Blasting of bedrock through the use of explosives will negatively impact the functions of the wetlands, including trees, plants, insects, aquatic life, animals and birds that live there. Night lighting from this drastically increased height and density development will disrupt the functions of the wetlands, including the trees, plants, insects, aquatic life, animals and birds that live there. The increased height and density of buildings adjacent to/between the wetlands have a potential for bird strike kills to resident and migratory birds. While the proposal will “replant” trees, it will degrade and replace existing natural ecosystems (forest and wetlands), and have an impact on the natural flow of surface water and reduce wildlife connectivity.”

Last week, Wilton’s First Selectwoman Lynne Vanderslice published an editorial asking supporters of such projects to speak up at meetings like the one planned for tonight. She wrote of supporting developments like Wilton Heights to send a message to developers that Wilton welcomes their business.

“Wilton requires new investment in diverse housing to help retain residents, to attract couples not yet ready to buy, to support Wilton businesses, restaurants, non-profits and amenities and to continue to be a desirable, independent community. With creativity and a co-operative spirit, this can be done while still maintaining our natural environment and our history.”

She added, “Most of you are willing to embrace the possibilities for the future. After all, you elected leaders with those sensibilities. Now is the time to make an effort to learn what is being proposed, to communicate with Planning & Zoning, to express your support, and to help shape much needed growth.”