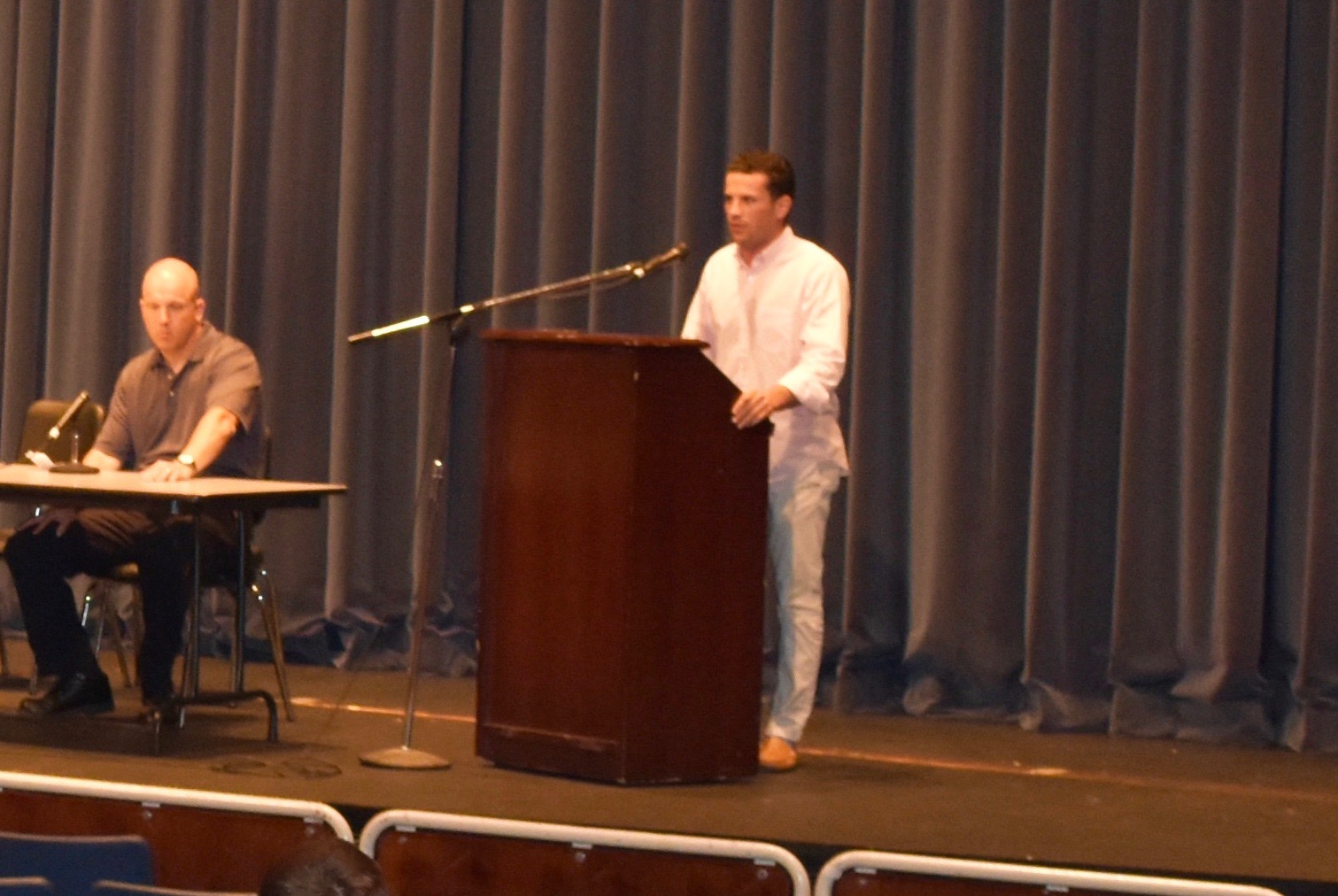 Future Addiction Starts with High School Drug and Alcohol Use

Wilton High School juniors attended a presentation in the Clune Center yesterday on alcohol and drug abuse, one that provided them with an honest glimpse into the very relevant tragedies of addiction. The presentation featured two segments, the first in which 2008 Wilton graduate, Tim Holt, discussed his tumultuous journey with substance abuse. The second half incorporated a Q&A-style panel featuring the School Outreach Counselor, Alexa Lee; the School Resource Officer, Officer Rich Ross; and Carolee Paruta, a clinician from Mountainside Treatment Center, located directly across the street from Wilton High School.

The overall theme of the presentation outlined the risk of future addiction when using drugs and alcohol as a high school student.

Holt delved into his personal history as a heavy substance user and shared the difficulty of his recovery after a painful and gradual transition from well-liked, successful, varsity lacrosse player at Wilton High School to a struggling addict reeling from the loss of familial and financial support.

Recounting his experiences in gripping terms, he emphasized the similarities between his teen audience and his own earlier years as a former Wilton High School student, driving home the inevitable nature of abuse when substance use starts at a young age. He articulated just how serious and far gone he was even back then.

This echoed Paruta’s professional observation. “What we’re seeing in teens is the start of drug and alcohol use at a young age leads to addiction at a later age, which can also lead to experimentation with harder drugs.”

Holt provided an example of someone who transitioned from overindulging in easily-accessible alcohol and marijuana in high school, to painkillers such as Oxycodone, and eventually turned to the cheaper and more lethal alternative of heroin in college.

Holt highlighted the physiological aspects of drug abuse, discussing his insecurities and fears. He told the students he “…felt lost, like life was a black hole and I didn’t know what direction to go in.” He urged people in similar situations now to ask themselves the question, “Are you getting high because you enjoy it, or is there something going on at a deeper level?”

Paruta reflected on this as well. “One of the most important things is having a support system,” she said, emphasizing the importance of banishing the feeling of loneliness that often drives people to drugs and alcohol as an escape in the first place.

The students got to hear the extremes of Holt’s experiences, as he told them how he endured homelessness and multiple overdoses, as he fought the addiction, enrolling in five different rehabilitation centers all by the mere age 23 years old. Holt also revealed  that he witnessed substance abuse plaguing other WHS students as well, with a shocking statistic. “Ten to 15 kids from the grades above me or below me had died since I graduated.”

When Holt sought out his parents for help, his mother initially delivered heartbreaking words:  “You’re not my son, my son died two years ago.” That moment was when he experienced a true awakening and began “listening to the fear inside of me and being more open-minded to treatment options.” His parents gave him another chance and sent him to a rehabilitation center, which eventually led him on his current path to sobriety. As of July 15, Holt will be sober for four years.

Holt also commented on the dynamic of Wilton, the town he and his entire audience grew up in, urging the students to ignore the stigma of not knowing what you want in life, a sentiment especially common in high-pressure towns such as Wilton, as this feeling of being lost with no direction drove him to the comfort of drugs.

“No one wakes up in the morning and decides to be an addict–it’s a slow progression,” Paruta said. The lesson the presenters left students with is that though the long trek of addiction is grueling, hope can be unearthed in unfamiliar places, whether that be a friend to confide in or a professional treatment center even Wilton can provide.

An Unflinching Look at the World of Teen Dating Violence

In the presentation, Dean portrays a teenage girl who tells the tragic story of her experiences in an abusive relationship, which leads to her eventual death. She begins her backstory by describing the first time she met her abusive boyfriend, Ricky. She says she met him at a local Burger King, and that he was extremely polite and held open doors for her. Eventually, she and Ricky began seeing each other, and she was very happy whenever she was around him. However, Ricky began acting jealous and controlling. Once they were officially dating, he kept her from maintaining friendships with any other boys, and became furious when she interacted with one in public. He also insulted her, constantly checked to see where she was, and made fun of her to obtain a laugh from his friends. Despite this behavior, she did not consider leaving Ricky because he constantly manipulated her into thinking he was a good person, and that his actions were acceptable. After being rude, he would often apologize and make excuses for what he did, claiming that he “loved her.” Just like real-life victims of dating abuse, the girl was convinced that he would eventually change. Unfortunately, this would not be the case:  Ricky’s behaviors eventually escalated to violence and sexual assault, often happening during fits of irrational, jealous rage. On the night of her prom, Ricky killed her out of anger while she was wearing her favorite yellow dress. Yellow Dress was an unflinching and realistic look into the world of dating violence, and was informative about not only the actions of abusive dating partners, but also the psychology of the victim and the effect that their partner’s constant manipulation can have on them. Dean gave a moving performance and made her character fully convincing.

After the presentation, Dean further described the deep messages of her performance. She outlined concerning behaviors that could be considered warning signs, including when a partner excessively calls on the phone; manipulatively controls aspects of the other person’s life, such as what they eat and who they speak to; or insults the other partner.

She emphasized the fact that teenagers need to listen to their gut feelings while in a relationship, and that if something does not feel right, they should reach out and talk to someone about it. Dean also discussed how to help a friend who is in an abusive relationship, including offering to talk to them and giving them emotional support. She emphasized the fact that abusive relationships can occur anywhere, including in Wilton, and that everyone should be prepared to combat them.

Dean says her presentation is crucial for a community like Wilton, because dating violence can happen everywhere and anywhere. “The fight is unilateral, and you have to start somewhere,” she says, adding that education and awareness are essential to preventing dangerous relationships.

Sophomore year is an ideal time for students to see Yellow Dress, according to Zemo.

“It’s a good time before students are launching into longer-term relationships, to help raise awareness about how to help a friend or think about their own relationships,” she says.

The presentation certainly gave great insight into the ways abusive relationships start, and how to prevent them, preparing WHS sophomores with tools to better maintain safe relationships in the future and to know how to act if something feels off.