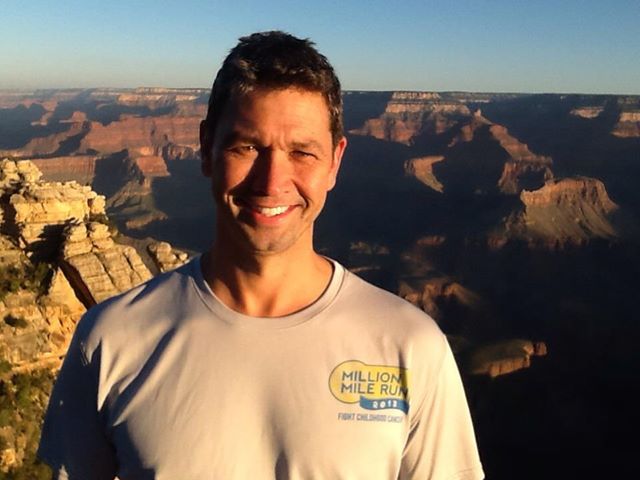 What inspires the indefatigable captain of the Wilton Cure-iors, Jeff Snyder, to help Wilton change the world? Knowing that if he and others give everything they’ve got, perhaps YOU will give something too.

Jeff Snyder would run one million miles if he could to cure his daughter Kennedy’s cancer.  He’s coming pretty darn close. Today—yes, this very day—he’s running across the Grand Canyon, for a second amazing time, to raise money to fight pediatric cancer. As if that wasn’t enough, he’s also the powerhouse organizer behind the Wilton Cure-iors, the team of town residents who have each committed to running up to 100 miles during September’s Pediatric Cancer Awareness Month, all part of the nationwide “Million Mile Run” effort for Alex’s Lemonade Stand Foundation.

For those who know Jeff, he’s typically self-deprecating when asked about the amazing project he’s put together.  “I’m just a cheerleader. I’m just gathering people together. The real strength and the real story is everyone coming together like this. That’s the power.”

And powerful, it is. So far, the Wilton Cure-iors team has been true to its “warriors for a cure” motto. Over 100 people have joined the team, raising just over $32,000 in the last month. They’ve run more than 6,200 miles for the cause, and they’re the number one team in the whole campaign.

Snyder is blown away by the response he has gotten since putting out the call to friends that he wanted Wilton to get involved in the ALSF campaign. Not only did his friends and acquaintances get on board right away, but so did many people he didn’t know. Similarly, the donations started rolling in quickly, so much so that he upped his initial fundraising goal when the team hit $23,000–$3,000 over his initial $20k mark just one-third of the way through September. The number he wants to hit now is $40,000.

“It was good to see how some people got involved very early, they jumped on and …it’s the snowball effect. People hear about it, and ask, ‘How do I become part of that?’ Even our inaugural run, all of a sudden kids of the parents who are part of it, they want to be part of it, and next thing you know the kids are logging miles.”

He’s gotten support from the community—a fun-raiser at Scoops of Wilton, which last Sunday donated proceed from sales of their popular Swamp flavor netted $500 and a lot of good community will. Plus he found a corporate angel in the form of his friend Dave Pennino.

“The largest single donor has been and will be Dave Pennino. Dave is Wilton guy who is CEO of LogicSource, a company in Norwalk. He’s not a big runner, and heard about this, and was like, ‘I can do this.’ He did a huge email blast to his friends. The reason we were at $17,000 by the first week was him. When I said that my company, Inspira Marketing, that because our mission is to support pediatric cancer awareness, we’d do dollar-per-mile match, boom! He was in for the same thing,” Snyder explained.

You read that right. Both Snyder’s company and Pennino’s company will be making a dollar-per-mile donation each at the end of the month. If the Wilton Cure-iors tally 7,000 miles, that’s an additional $14,000 that will go into the pot.

The Wilton team has done so well, they received a congratulatory $2,500 donation from Volvo US. The news of the donation was personally delivered by Jay Scott, the director of ALSF, and dad of Alexandra “Alex” Scott, the little girl who started a lemonade stand to raise money to cure cancer during her own battle with the disease, one she lost in 2005 when she was only 8 years old.

“Jay Scott has become one of my dearest friends,” Snyder said. “He’s such an inspiration to me. I just can’t imagine. Sometimes I have those ‘what if’ thoughts. How would I really take it if we lost Kennedy? Would I be so strong like a rock, like him? Would I just wither and die? Would I veer off my path? And I think of what Jay did—after they found out about Alex’s diagnosis, they literally uprooted their family to move to Philadelphia to get the best treatment and doctors for the best protocol, and unfortunately she lost her fight. If they had just walked away, everyone would have understood that. Instead, it was foot on the gas, we’re getting to that goal. It’s amazing.”

It’s that kind of strength that Snyder shares with Scott and that he gets from everyone else that keeps him going.

“That strength is around us all the time. It’s just awesome to see the way this community comes around one another, that they’re participating at the level that they are, not just financially, but running miles.”

“I got into running when I met [my wife] Kristy, and I wasn’t a runner until then. We’d go out running together,” he explained, on a run with him that doubled as an interview.  He kept up with the running, eventually progressing to other, more difficult challenges. “Oh a 10K. Hmm, a half-marathon. Tough Mudder, what’s that? Cool!” he laughed. Running with Jeff you get used to hearing the enthusiasm and charisma in the cadences of his speech, and you can even hear the exclamation points.

Jeff continued, “I did two marathons…and oh, yeah, there was the marathon in the Grand Canyon—I love those types of challenges!” Breathing hard next to his breathless excitement, trying to keep up with him on all fronts. Talk about a challenge.

Snyder admitted that he didn’t always find running meditative or restorative. “For a long time it was work—I’d think, ‘Ugh, I’m fat, I need to get in shape, I need to break a sweat.’ But now, look, we’re running on this path, you can get lost in your thoughts. The next thing you know you’ve just run a mile and don’t even don’t remember it. It can bring a sense of calm and power.”

But when you’re at a level where even believing you can run 26 miles through the Grand Canyon, you need to have faith that you can be in it for the long haul. It’s a mental marathon as much as it is a physical one. “The first few hours were sheer and utter amazement. Every turn uncovered a new view. The sun rising, reflecting off the red rock it was like—‘What!? Are you kidding me?! We thought that was the best view, we have to stop again and take another picture!’ The long runs are where I really think about Kennedy. I love keeping my thoughts on her. When I’m in the canyon or like just grinding a run, I can flip a switch and just think of her.”

There’s a clichéd metaphor that’s an easy one to apply to all of this—it’s a marathon, not a sprint. To keep going, you’ve got to pace yourself. It’s unspoken in Snyder’s second attempt at covering the distance of the Grand Canyon, in the ALSF organizing people around the country to run a collective one million miles, in the idea of fundraising to cure cancer, and perhaps the most important one for Jeff and his family, in keeping Kennedy as healthy as they can. And keeping focused on the positive.

“Yes, the tumor is growing again,” he revealed, giving permission to include the info in this article.” It’s one of those you’re looking up at the MRI slide and you see, ‘whoa,’ that one’s grown. Jay Scott put it best—‘we’ve both been here before. You’ve been here before. Let’s get at it.’ There’s not a lot we can do until we learn more. We’re not going to dwell on being negative about it.  We’ve been so fortunate. Clearly, it’s not what we thought it was so long ago. She’s here. We thought we’d be lucky if we had five years. It’s been 10. That’s great news. Five more years of her building strength. Five more years of new breakthroughs and new medications. That’s why we get excited when it’s stable. You know, there was a time that it had metastasized to her brain, and that’s non-existent now, that’s gone. So, we’ll take that as a win,” he said.

Snyder started a foundation for pediatric spinal cord cancer research after Kennedy’s diagnosis, when they found there was so little research being done on her particular kind of cancer. But for this “Million Mile Run” effort, he’s all about doing it to benefit ALSF.

“You would think because of Kennedy’s tumor and how rare it is that anything and everything I do would revolve around spinal cord tumor and research, because it’s so underfunded. Especially after starting a foundation to raise money for just that. So why now with ALSF? It’s exactly that—this is a charity that is all about little people making a difference. Every little bit counts. Teaching how kids’ impact can benefit a greater good. You’ve got strength, hope, optimism. Something that kids can actually do to help becomes tangible. Them going out, starting a lemonade stand, collecting pennies, the dollars, sending them in. They have literally thousands of lemonade stands all over the world. And the grassroots aspect strikes such a chord with me, I love it. And what ALSF stands for—helping kids.”

If there’s anything to learn from Jeff, there will always be more miles to run, more people to help, and more ways to help do it.

“Alex had a goal too. It took a while to reach that goal too. We’ll be back next year bigger and better,” he said optimistically. “What great things are we learning for next year, though! Get healthy and cure cancer, come on, Wilton! Next year, we can have a parade!”