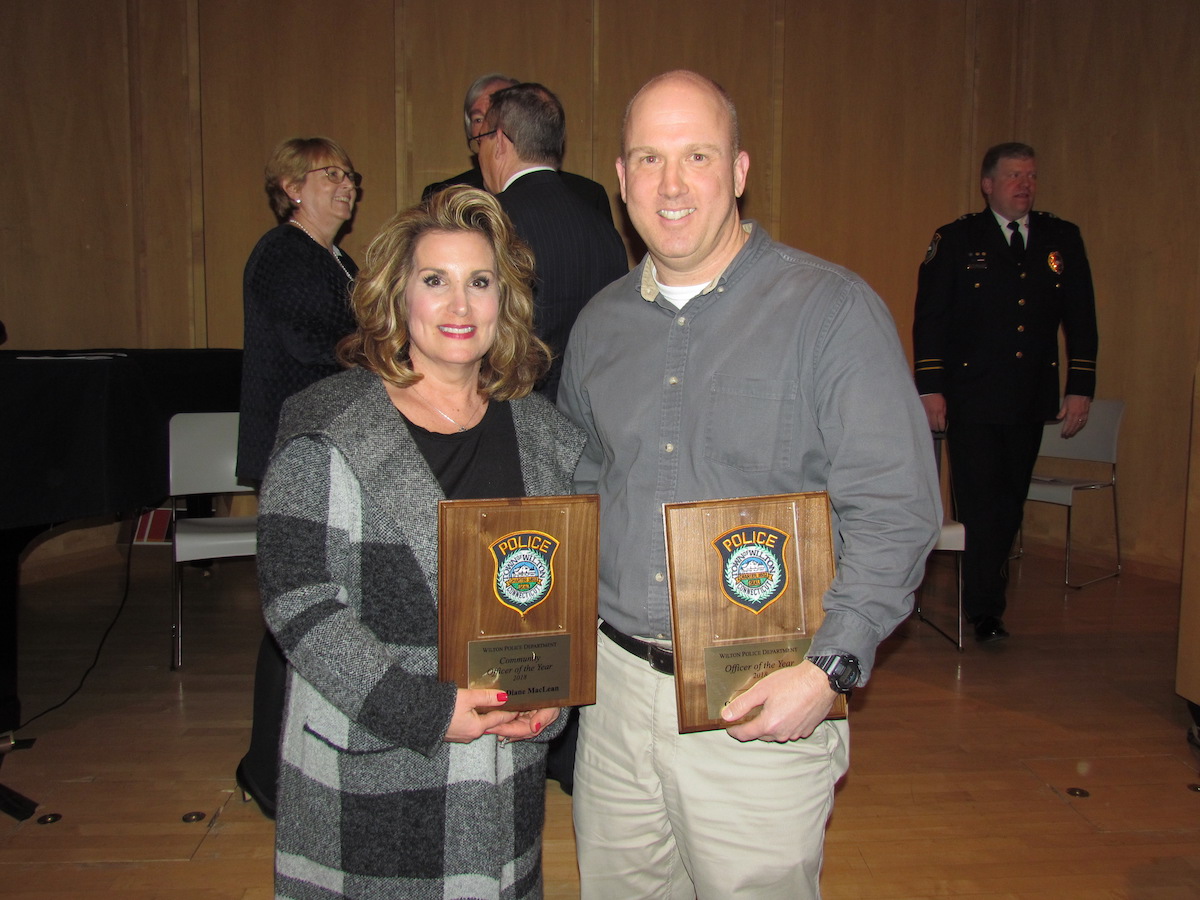 The bravery and dedication of Wilton’s Finest was on display Monday evening, March 25 at the 17th Annual Wilton Police Department Awards Ceremony at Wilton Library. There, under the watch of the Police Commission, First Selectwoman Lynne Vanderslice, and a room filled with grateful residents, Chief John Lynch bestowed awards and commendations to the men and women of his department.

In addition, this year’s recipient of the Civilian Blue Angel award actually went to an entire group of people, as the Department honored the members of Wilton Community Emergency Response Team (CERT) for their service and dedication to Wilton’s public safety officers.

In her remarks, First Selectwoman Lynne Vanderslice said she wanted to recognize the strong leadership of the department in Lynch as well as Captain Tom Conlan and Captain Rob Cipolla. She said the entire town is grateful for the Wilton Police.

“We have a very high performing police department, and the residents of this town know that. They acknowledge it and gave the department a 97% approval rating in a survey. All of you should be proud of that number.” Donald Sauvigne, who chairs the Police Commission, spoke of the department’s exceptionalism, pointing to Wilton’s consistent ranking as one of the top two safest towns in Connecticut as just one reason. He also mentioned Det. Peter Trahan, who has been “on loan” with the Federal Drug Enforcement Agency (DEA) as a tactical diversion task force officer, closing several cases in opioid trafficking; Sgt. Steve Rangel, who oversaw the year-long effort to regain Tier-1 accreditation for the department–something only 37 agencies in the state have achieved; and Conlan, who just returned from a two-month assignment with the FBI National Academy, something only 1.0% of police officers do.

Police Officer of the Year The Police Officer of the Year award is granted each year to the member who distinguishes themselves from their peers by actions which represent the highest standards of the police profession.

Lynch told the crowd that Ross’ colleagues say he’s an unsung hero, and “someone who is always willing to listen and help.” As the primary investigator of the Department’s criminal investigations involving juveniles, he often deals with cases that involve drug, assault, sexual assault, and domestic violence investigations, all the while being “acutely aware of the population” with whom he works.

“They are young and impressionable. With that this officer has exemplified great compassion and discretion in determining when a juvenile should be referred to court or perhaps may benefit more from a restorative diversionary program.”

Lynch spoke of Ross’ knowledge and ability to give advice and input, and that he is “a trusted pillar among students, parents and faculty.” Ross also works throughout the community, representing the Wilton Police with other community organizations and groups as a resource focused on the Town’s youth, including Children’s Connection, the Wilton School District’s Emergency Operations Planning, the Wilton Youth Council, and the District Crisis Team.

Community Police Officer of the Year This award acknowledges members of the Wilton Police Department who have demonstrated outstanding service to the community with particular emphasis on the Wilton Police values of Integrity, Respect, Professionalism, and Community Support.

MacLean was recognized not only for her devotion to raising funds for the Special Olympics–including rappelling down the side of the 34-story Mohegan Sun Report Tower for the “Over the Edge” fundraiser–but her embrace of community policing. According to Chief Lynch, MacLean, “…has become a recognizable, familiar, and comforting face in our Wilton school district. Currently assigned as one of our school resource officers, this officer has made great strides in forging lasting relationships with our school’s students, parents, teachers, and administrators. In that assignment, this officer also rolled out the C.A.R.E. initiative – Caught Acting Really Exceptionally – a program established to encourage and reward random acts of kindness by distributing ‘tickets’ (gift cards) from participating merchants when a school-aged youth displays an act of kindness, ethics or integrity.” In the second year this award has been given out, the Police Department honored Wilton CERT with the Civilian Blue Angel honors, in recognition of the groups’ selfless commitment to the town and to the department. The award recognizes efforts that aid the police “in prevention of crime, apprehension of criminals or performance of valuable community service.”

In naming Wilton CERT as this year’s Civilian Blue Angel award recipient, Lynch said, “Whether it is a major storm or routine community event, these members are always there to assist in any way possible, 24 hours a day. They train and prepare on their own time and are ready to respond to any call. They spend countless hours volunteering at events and emergencies as well as facilitating our Code Red system, assisting in the EOC, setting up local shelters and procuring equipment and supplies through federal grants. The CERT group also spends countless hours maintaining their equipment to ensure their readiness.”

Learn What To Do in Emergencies, as CERT Offers Disaster Preparedness Training