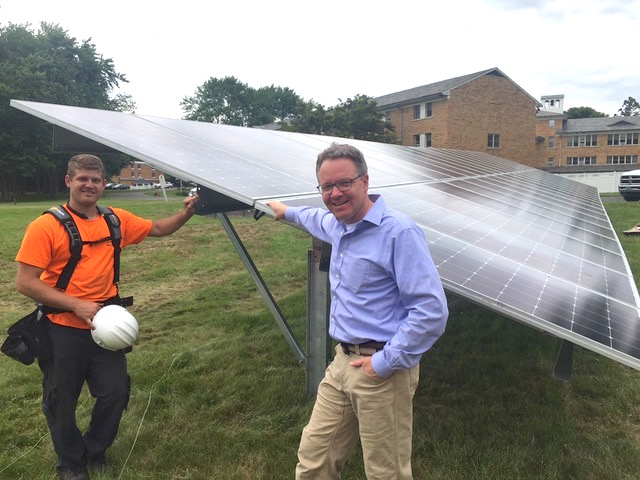 Over the last two years, the project has been under the direction of MHR Development, a sustainable energy consultancy, which worked with SSND to develop and implement a multi-measure sustainability project to reduce the environmental impact on their various facilities.

Officials have said that the project is one of the region’s largest and most comprehensive sustainability projects.

The School Sisters of Notre Dame is part of an international congregation of religious women, with members in 31 countries. The Wilton campus is the location for “Villa Notre Dame,” with approximately 200 residential units, a dining facility, worship space, offices, a gym, and a commercial kitchen. Also on site is Lourdes Healthcare Center, a 40-bed nursing facility, as well as a Montessori School.

The main goals of the project were to reduce SSND’s environmental impact and operating expenses while increasing occupant health and comfort. MHR evaluated all the facility’s energy and water resource demands, and occupant comfort needs to craft a master sustainability plan. The upgrades included:

With this part of the overall project now completed, the SSND will be able to realize an operational savings of $19,000 annually. They also receive $141,240 in utility incentives and have realized a 50% reduction in oil usage. Additional the SSND have been able to conserve 3,500 gallons of water per year.

Phase II of the project involves efforts to utilize SSND facilities and campus in generating renewable energy. That involves the installation of two photovoltaic systems (or solar power systems). One smaller system (37 kW system) is being built on the roof of the Lourdes Healthcare Center. The larger system (122 kW system) is a ground mount system, and will be the first of its kind in Wilton. That solar field is expected to be online by mid-summer.

Together, the two systems are expected to generate somewhere in the realm of 200,000 kWh/year, or 25% of the facility’s electrical load. Moreover, it will generate approximately $20,600 per year in renewable energy credits that help to underwrite the system cost. When the systems are completely operation, the projected average annual savings during the term of the Power Purchase Agreement is estimated to be over $15,000.

Collectively, the project is estimated to offset 510 tons of carbon dioxide from the atmosphere annually. Combined with the solar, there will be a net reduction of 400,000 kWh in grid power used annually.