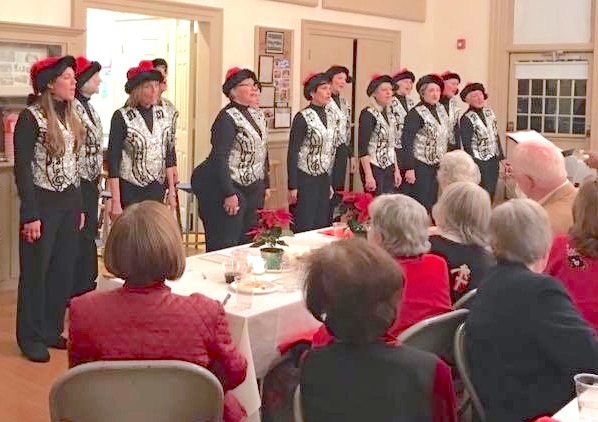 Why save your superb singing voice for the shower when you can delight an audience with it? The Treblemakers, a Wilton-based, all-female singing group that sings in three- and four-part harmony, is looking to recruit new members.

The Treblemakers date back to 1999 when director Mary Bozzuti Higgins was asked to create a Wilton Community Chorus. The group proved successful within its first year running, with plenty of participation, however, it was clear that the ratio of women to men was a bit unbalanced. So, Higgins decided to continue it as an all-women’s ensemble. The program is run through Wilton’s Parks & Recreation Department.

For 18 years, the group has been spreading the joy of song to a variety of audiences, mainly through performances at community events, area nursing homes, and independent and assisted senior living facilities, including The Greens, Meadow Ridge, Sunrise, Avalon, and The Atrium, Laurel Ridge, Ridgefield Housing, and The New Canaan Inn.

Performing at Stay at Home in Wilton’s annual Christmas party has become a treasured tradition for the Treblemakers as well. The group marched in Wilton’s Memorial Day Parade for about 15 years, and although they recently retired their float, Higgins says, “[We] always loved honoring Wilton’s veterans and were very proud to be a part of that day.”

Higgins, a former opera singer selects the music the Treblemakers will sing based on what she believes will make the group sound best, with everything from Big Band Swing and Sweet Adelines a cappella harmonies, to Gershwin and show tunes. As the members have become better sight readers and musicians, the level of music difficulty has increased. Even harder, members do not hold their music while singing; instead, they must learn it, rehearse it, and memorize it so that they can engage the audience while performing.

Their performances are accompanied by dancing and using props. Three years ago, the group decided it was time to spruce up their performance outfits, which now consist of a black and silver sequin vest, atop a black shirt and pants. Just like their flashy and fun attire, the Treblemakers are truly a unique group.

The core group consists of 12 women that have participated for quite some time, most since the group’s inception in 1999 with some others who come and go. While an audition is not required to join the group, every member is talented as a result of her individual experience.

“They either sang in high school or college and loved it…then life happened and they found they really missed it. So they opt for the no stress, no audition, fun environment that is our Monday night rehearsals,” she says.

Higgins theorizes that the beauty behind the music is the friendship and the bonding between the women that formed over the years, and describes The Treblemakers as, “…a very special group that is more like a sorority that sings.”

“We often joke that the minimum fee required by the Wilton Parks and Recreation is cheaper than therapy!” She emphasizes that the true joy of the group comes from “…the shared experiences of performing for the elderly and helping them to come to life for a half hour. It’s very hard to describe the electricity that we all feel once we are ‘on the road’ with our show.”

Group members offer their own testimonials of how The Treblemakers is a warm and inviting community for singing and sisterhood.

“I enjoy being a Treb because from day one I felt welcome. The women support one another with advice, food, love, and companionship. Though I may be tired at the end of the day I feel energized after rehearsals and singing with the appreciative seniors in assisted living facilities,” one member expressed.

Another member believes that being a part of The Treblemakers has contributed to her life in the best of ways. “I have never met a smarter, funnier, talented, more supportive group of women in my life. The laughs in rehearsal are never-ending and the energy in our performances is infectious. My life has been enriched by joining this group.”

A third Troublemaker mentions how one rehearsal has the power to turn the day around. “The smiles, laughter, support—women are powerful friends. I love hearing the harmonies and being a part of something so beautiful. The smiles and joy we bring others, priceless.”

The Treblemakers are seeking more members to join in on the singing and fun. Their season runs from fall through spring and they rehearse Monday nights at Wilton High School. As an informal group, there is no need for an audition. Interested participants can contact Higgins at 203.216.7999.