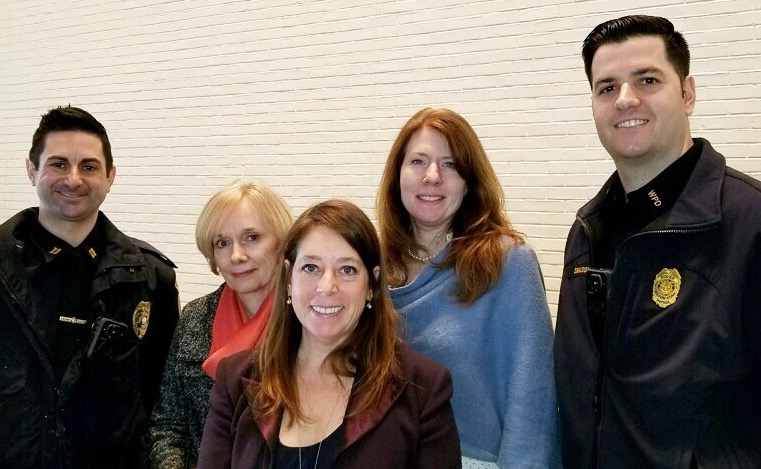 The Wilton Woman’s Club has taken on the issue of domestic violence as its public service effort this year. Despite Wilton’s polished exterior, domestic violence is a problem on the rise here. In its work to address it, the Wilton Woman’s Club is seeking nothing less than a cultural shift. The club’s annual Fashion Show and Luncheon Fundraiser this year on Thursday, March 29, “Breaking the Cycle of Sexual Harassment and Assault:  Wilton Takes a Stand,” will support new educational programs created by the Wilton Domestic Violence Task Force to help the town’s children and their parents learn how to be in respectful intimate relationships. The fundraiser will also support the ongoing good work of the Domestic Violence Crisis Center.

This Special Report looks at what’s happening in Wilton and the several steps being taken to address it.

Across the country, women who have experienced sexual assault and harassment are bravely coming forward to tell their stories as never before. In this watershed moment, communities everywhere are reassessing how to keep girls and women safe in their homes, schools, and workplaces–and Wilton is no exception.

“The Wilton Police Department has responded to 98, 102, and 100 domestic-related calls in each of the last three years (2015-2017). Of these 50, 38, and 37 qualified as family violence calls by definition of the Connecticut General Statutes.* Domestic violence does not discriminate based on race, age, gender, ethnicity, sexual orientation, religion or economic status,” Cipolla says.

[C.G.S. § 46b-38a:  “Family violence means an incident resulting in physical harm, bodily injury or assault, or an act of threatened violence that constitutes fear of imminent physical harm, bodily injury or assault, including, but not limited to, stalking or a pattern of threatening, between family or household members. Verbal abuse or argument shall not constitute family violence unless there is present danger and the likelihood that physical violence will occur.”]

The police work involved is difficult and requires tremendous nuance, as Cipolla says there are a myriad of complexities that come along with these types of investigations. They often involve substance use, mental health, an offender or victim’s status in the community, and most importantly that these investigations involve people who have a familial relationship in some capacity.

“The people involved are not strangers, rather people that have some type of household relationship, which inherently brings along with it complex emotions. In some incidents it is these complexities that make it difficult for a victim to leave an abusive relationship,” he adds.

Ultimately, the police department’s goal is to keep victims safe and hold offenders accountable. Under his direction as the WPD’s representative on the Wilton Domestic Violence Task Force, Cipolla has grown the partnership between the Wilton Police and the Domestic Violence Crisis Center (DVCC), using tools such as the Lethality Assessment Program (LAP), which assists in identifying victims in the greatest danger and immediately putting them in contact with the DVCC who can offer a variety of resources that enhance victim safety.

The Stamford-based DVCC has been working for 20 years to help Fairfield County victims of domestic violence, providing a 24-hour hotline for people to get help, safe houses, legal and medical support, counseling, children’s services, educational programs, and adult training and workshops.

While the public may assume that Wilton residents are not ‘typical’ of the population served by the DVCC, think again. According to Kevin Shippy, the DVCC’s executive director, the metrics alone show how the issue of intimate partner violence crosses all socioeconomic barriers.

“We provide $350,000 worth of equivalent services to Wilton alone. That’s based on our representation in arraignments, protection, legal expertise and counseling,” Shippy notes.

Chitra Shanbhogue is the director of the Center for Community Initiatives at the DVCC. She explains that through partnerships with town-specific task forces, like the Wilton task force, the DVCC can help each town set a specific agenda for outreach in the local community.

“They have the finger on the pulse, so to speak, for what their individual communities need–raising awareness, and identifying areas where they would like more information and programming,” she explains.

The partnership between Wilton’s task force and the DVCC is a strong one.

“Wilton is our gold standard about the kind of partnership we look for,” she says, pointing to Cipolla’s work for which he last year received the Kathy Kincaid Award, a recognition given to individuals who have shown dedication above and beyond to victims of intimate partner violence. She also credits Jennifer McNamara, a committed local volunteer who started working on the task force in 2011 and .

“Since then, Wilton has especially made great strides, and has a long record of having residents who are extremely connected, who admit there is an issue and are very responsive,” Shanbhogue says. “I’m not surprised that the Wilton Woman’s Club was so receptive to helping. The group was extremely empathetic and sympathetic in a meaningful way.”

Money raised from the Woman’s Club’s fundraiser as well as its ongoing, year-long effort will support what the DVCC has identified in Wilton an important area, focusing on education and the town’s strong school system. A key target of that is Wilton’s teen population, especially because teen dating violence is one of the most under-reported areas of intimate partner violence.

“Teens don’t have a place where they can share and be counseled. Wilton felt was timely for us to focus on an educational component,” Shanbhogue adds, noting that even though the DVCC is a crisis center standing ready to offer safety to victims of domestic violence, their outlook is also geared toward education and stopping the cycle before it even starts.

The Wilton Initiative will involve training school staff to deal with conflict resolution, healthy relationships, and teen violence. DVCC’s Teen PeaceWorks Project will provide age and grade-appropriate programming to educate young people about healthy relationships, conflict resolution, bullying, and the dynamics of dating violence. Other programs will aim to discuss the roles that boys and young men play in violence prevention.

“The WWC support is so vital this year because we have seen an awakening of awareness regarding the treatment of women and basic human rights. It is imperative that we keep the conversation going and that the #MeToo/Times Up movement is not to be remembered as a fad but as an actual point in time when a shift began in our culture,” McNamara says.

She says the Wilton Domestic Violence Task Force will make the most of the opportunity.

“This is the first time any donation is specifically intended to finance speakers who can educate our students and the community at large about the abuses of power in relationships, gender roles that have been defined by society and discuss ways in which we can challenge old stereotypes and create a community that is more open and accepting of everyone. Real and lasting change in our country has always begun at a grass roots level. Reporters and newspapers can help give voice to people who have had none before but it’s up to individual communities to show that they’re listening, that these stories matter and we’re willing to make changes so that no one needs to feel forgotten or alone,” she says, adding, “Everyone matters.”

Which makes what is raised at the WWC Fashion Show and Luncheon Fundraiser all the more important. Tickets are still available for the event on Thursday, March 29, and can be purchased on the Wilton Woman’s Club website. The RSVP deadline is March 21.

The Woman’s Club is grateful to the sponsors of this event:  Bankwell Wilton, The Bauer Family Foundation, Price Financial Group, and GOOD Morning Wilton.