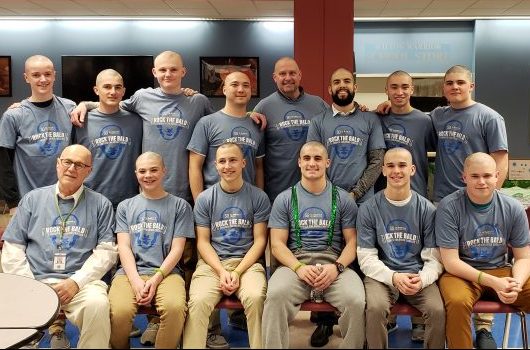 The Wilton High School cafeteria was abuzz with the sound of hair clippers Tuesday night, March 12, as 50 students and members of the WHS faculty became 2019 shavees in support of the St. Baldrick’s Foundation for research into pediatric cancer.

This is the 11th year that WHS has held the fundraiser with participants who volunteer to have their heads shaved and gather donations from sponsors. This year’s motivated group met its $20,000 fundraising goal, with three individual students who each raised over $1,000 apiece, an amazing achievement.

The fundraiser is organized each year by a student committee supported by WHS guidance counselor Daniel Pompa as their advisor. Senior August Theoharides spoke passionately about what drives his support for the cause. “When I was in middle school, my little sister was diagnosed with stage four neuroblastoma and has now been cancer free for five years.”

Freshman Edward Davies spoke of why he took part. “I always wanted to participate in St. Baldrick’s. It feels good to do what you can to help others, but it’s really strange to have a head that feels like Velcro.”

Traditionally not many girls have been tempted to participate, but this year bucked the trend with three young women who took part by going lock-free.

Donations are still being accepted and can be made online.