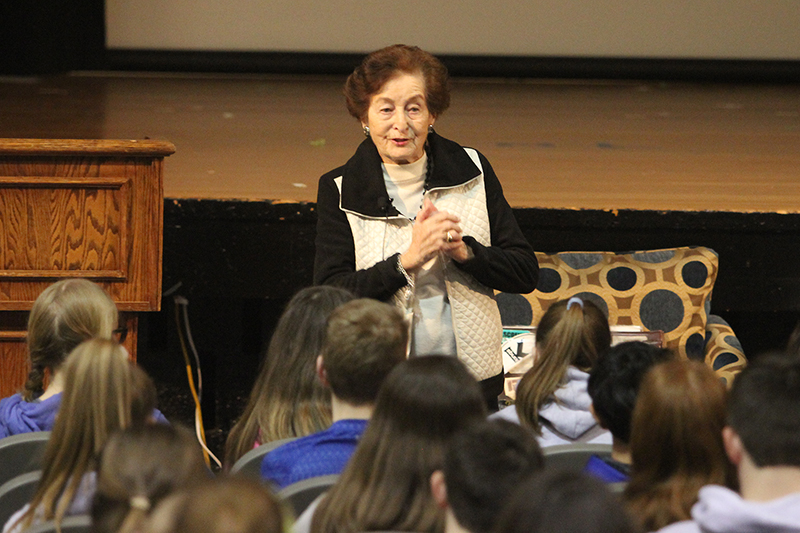 This story is adapted from a previous GMW article.

“My father put his hand on my head, as he did every Friday night when he blessed us for the Shabbos dinner, and said, ‘Judy, you will live.’ That was the last thing he said to me before going to the gas.”

Judith Altmann recalled her father’s final words to her when she visited Wilton last June. The 93-year-old Holocaust survivor returns Tuesday, March 19, to offer her haunting story of survival and determination, and to bear historic witness to why we must never forget.

Altmann will recount what happened to her and her family during the Holocaust, who were transported to Auschwitz where only she and her younger niece were pulled out of line and sent to work as slaves, while 24 other family members were sent to the right, the side that meant death in the gas chambers.

Her story weaves through not only Auschwitz but Essen and Gelsenkirchen labor camps, and surviving the “death march” to Bergen Belsen concentration camp. It begins with Altmann as a 14-year-old girl in Jasina Czechoslovakia, and encompasses her life after being liberated by the British Army in 1945, going from Sweden to the United States. It’s a lesson of what it took to stay alive, and find strength in knowing that her knowledge and education were the things that saved her.

And it brings her so many years later to Wilton to deliver her message about speaking out against intolerance:   “If you see any injustice in the world, stand up.”

As one of just a few remaining Holocaust survivors still alive, Altmann is driven by how important it is for her story to continue to be told, for people to never forget.

“Tell your children, tell your grandchildren this story, what discrimination and hate can do.”

Altmann will offer her presentation on Tuesday, March 19 at 7-8:30 p.m. at Middlebrook School Auditorium.