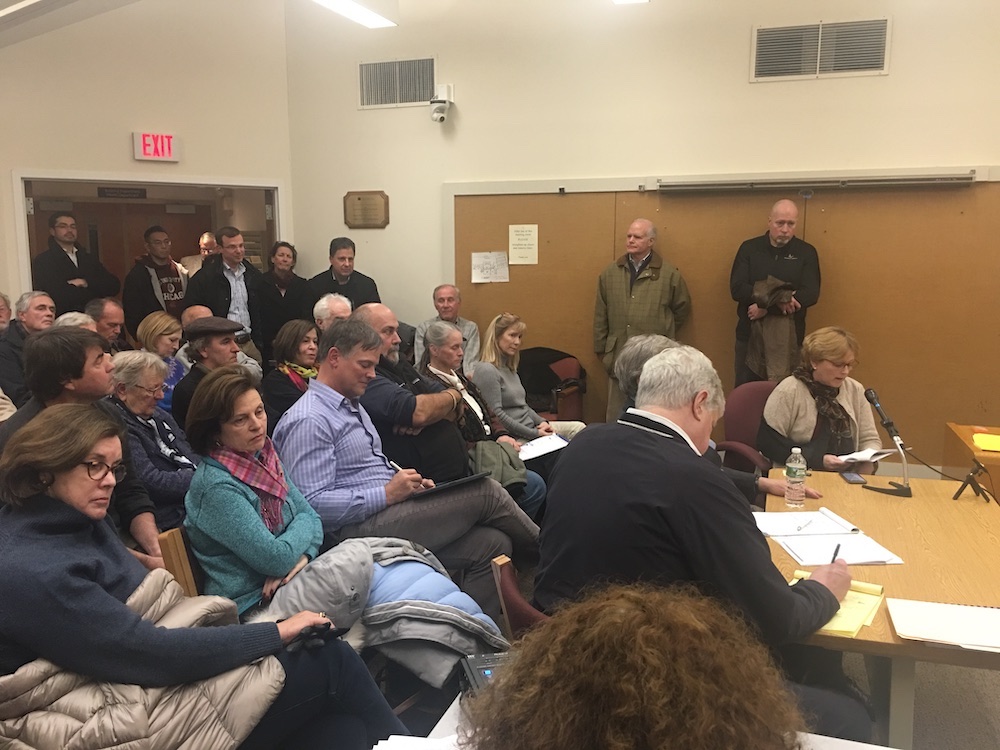 This is a summary of what happened at Monday night’s Planning & Zoning meeting, during a public hearing about an ‘agritourism’ regulation amendment brought by Millstone Farm. A more detailed update will be published later today.

At last night’s Planning & Zoning Commission meeting, a public hearing was opened on a regulation amendment to introduce provisions for “agritourism” in Wilton. The amendment application was filed by Millstone Farm, a privately-owned working farm that has conservation restrictions on the deed set in an agreement with the town by the property’s original owners. Now, the farm’s current owners, want to create an agritourism regulation to “establish provisions for (educational, recreational and entertainment activities conducted in conjunction with a working farm or agricultural operation) as a special permitted use in the single-family residential districts, and to allow offices accessory to a farm or riding stable as a permitted accessory use.”

The 70-plus acre farm is located in a two-acre residential zone, but operates under Wilton’s long-established land-use ordinances which permit farming.

The property’s second owners, Jesse and Elizabeth Fink, established much of what is on the current property, including commercial organic farming as well as educational and CSA-type programs. Over the years, the property would occasionally be used for events, including popular farm-to-fork dinners, weddings and other types of celebrations. Those events were not permitted under the town’s current ordinances, but they happened anyway.

When the current owners, Volckert and Eliane van Reesema, purchased the property two years ago, they applied for (and were granted) special permits to build an indoor riding ring and large horse stables, both of which are only permitted for private use. The regulation amendment for which they’ve now applied would allow events to be held on the property–which is still currently being promoted and used as a place for events that can accommodate up to 500 people.

Last night’s public hearing drew a standing-room-only crowd, and several members of the public spoke about the regulation change. There was some confusion for many members of the public unaccustomed to the subtle legal distinctions used by the land use zoning commission–even though the application was brought by Millstone Farm, commissioners could only consider it as a ‘general’ change that could apply to all residential zones and properties where farming occurs. The discussion was supposed to remain general rather than site specific to Millstone Farm–even though the amendment application was filed by Millstone Farm.

Most of the dozen or so residents who spoke at last night’s meeting spoke in opposition to the change–although many did so through specific criticism of current operations at the farm. Neighbors, several of whom have lived for decades on Millstone Rd. or nearby and abutting roads like Nod Hill and Deer Run, spoke of large trucks and increased traffic on Millstone during the construction of the riding ring and stable; of now louder events, specifically one wedding held over the most recent summer, with noise and music late into the night.

A handful spoke in support of Millstone’s application, including the farm’s closest neighbor, who said he was the neighbor most impacted by the activities, yet had never had any problems with traffic or noise.

At issue is possible interpretation of the regulation–could that open the property (or similar properties) up to more commercial uses like inns and overnight guests; conference facilities; restaurant and food service; and more. There is currently no restaurant or overnight residential usage at Millstone Farm.

The public hearing has been left open and was adjourned until the Commission’s next meeting on Jan. 14, 2019.