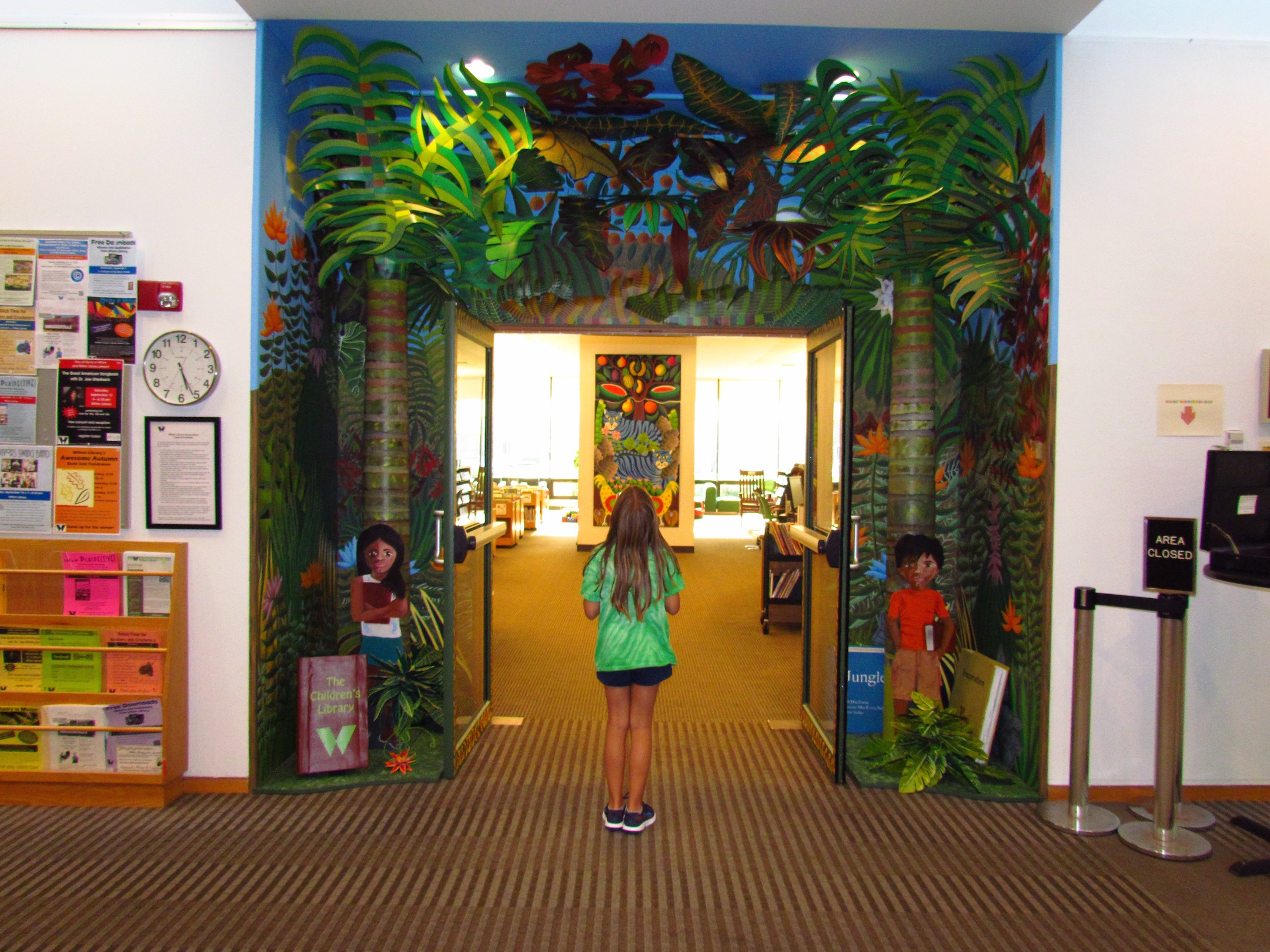 Wilton Library has always been about books and so much more. Now there’s another element that’s been added to the Children’s Library to inspire patrons of all ages.

The library has added a stunning 3-D jungle-themed mural around the doorway at the children’s section entrance. Created by Wilton artist Ed MacEwen, the library’s art chairman, it’s meant to spark imagination–in everyone.

“The aim of something like this, is that inspiration is so key. You want to create something that’s inviting and inspiring so that kids will feel invited and curious to explore what is beyond. The library’s mission is to be a gateway to discovery, so this is perfect:  It inspires a sense of curiosity, of exploration to a very beautiful and interesting world beyond that gateway, beyond that entrance. I really hope that it will continue to do that,” says Elaine Tai-Lauria, the executive director of the Wilton Library.

From what she’s heard, the entrance has done exactly that in the short time it’s been unveiled. What’s more, it seems to have had an effect not only on the children who have come into the library, but on adults as well.

“We’ve had children say, ‘I want to go into the jungle!’ And parents have been equally responsive, taking pictures of their kids in front of the entrance. Someone said that it inspires a sense of wonder and awe. The response has been so positive. There’s always that bit of childhood in us, even as adults. I think it does inspire that, it’s a pleasant memory,” says Tai-Lauria.

The idea has been in the works for a couple years, even before Tai-Lauria took the reins, starting with Wilton Library’s former director, Kathy Leeds, and Andrea Falkner, the long-time head of the children’s library. But it’s an idea that really took off when Tai-Lauria approached longtime supporter, the Shoff Foundation, with proposals for both the Imagination Station and a children’s area entrance mural.

“I asked Ed to give me a design to make it easier to explain what we’re thinking of. The jungle theme was a combination of talking to Andrea and certainly some of the tropical motifs that already existed. Going back even further, I remember when I brought my son as a child to the library, he would love to run over to the hippopotamus in front of the library, so I think it was a perfect thing to carry through the jungle theme,” Tai-Lauria explains.

The Shoff Foundation is named for Sheldon and Louise Shoff, former Wilton residents who lived in Wilton for almost 30 years from the ’50s to the ’80s in the house that is now the Wilton Volunteer Ambulance Corps, and who always considered Wilton their hometown. Trustees of the Shoff Foundation–Thomas T. Adams, of Gregory and Adams, and Richard L. Mason, a nephew of the late Louise Shoff–bestowed the gifts on the library, surprising library officials at an annual meeting with a check to fund the project.

MacEwen’s work is already well-known to library patrons, as this is the seventh mural that he’s painted for the library. For this project he collaborated with his daughter, Bonnie MacEwen Sailer and even got some help from his granddaughters, Jesse and Katie Sailer. He knew right from the start that it would be a three-dimensional work, to fill the alcove of the entrance. The work is mixed media:  the leaves, because they’re out of reach, are made out of metal so he could bend them into the shapes he wanted. It took a lot of pre-planning, with some advice from David Cunningham, who builds sets for the Wilton Playshop. All told, it took more than a year to plan, sketch, build and install.

“I did the leaves over the winter, and then we started painting the boards in early spring. Over the summer, my daughter and granddaughter, the three of us produced it. We used well over 70 colors and drew some inspiration particularly from Henri Rousseau, a 19th-century primitive painter who did a lot of jungle paintings. The orange flowers, all the flowers were taken from work he’d done. My daughter did the children and books on the floor,” MacEwen explains, adding that he had help from some of the building and maintenance staff as well.

One interesting fact:  MacEwen could only work in the actual entrance space from 7:30-9:30 a.m., when patrons weren’t around, so the entrance was always free during open library hours. “We spent a number of mornings installing it.”

The entrance certainly touches on some literary and artistic themes, and the beautiful part is that different people are reminded of different references. Besides, say, the Maurice Sendak classic, Where the Wild Things Are, Tai-Lauria says she’s heard people are reminded of Rudyard Kipling and The Jungle Book, and others have said they see Paul Gaugin-esque influences.

“Last week I was talking to a patron and his daughter about the entrance, and the conversation very quickly turned into one about the favorite books he read as a child, and sharing with his daughter must-read books, and it was really gratifying. Because you really hope it will stimulate that kind dialogue,” Tai-Lauria said.

Knowing that the library does a tremendous amount of programming, it’s likely that the mural will help inspire some specifically related to it. That was a thought MacEwen had as he created it.

“I liked the idea of something literary about the jungle and it gave us the opportunity to connect the jungle to an artist and published books–it would give the librarians a chance to talk to the kids about artists,” he says.

Tai-Lauria says she hopes that library programs will grow out of the mural as well.

“Much of what we did this year and what we hope to continue–the innovation station, and introducing more coding and 3-D printing–once you have someone inspired by something, you’re going to follow that wave. We hope this entrance will spark interest in more international reading for some children about different lands, about animals. It offers a lot of opportunities. We really want children to explore and discover all the things that pique their interest.”