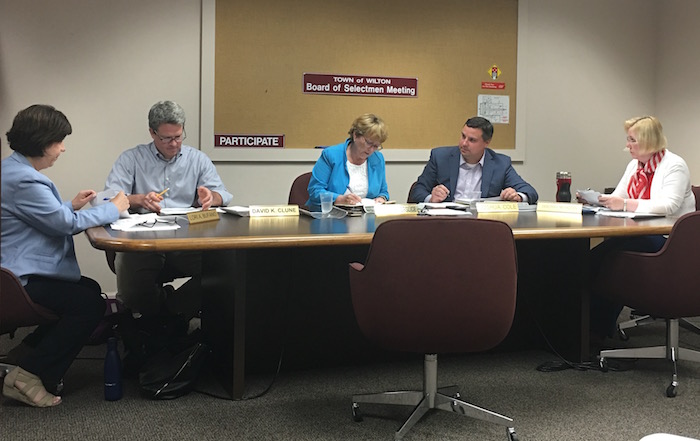 At last night’s Board of Selectmen meeting, Wilton’s first selectwoman, Lynne Vanderslice, brought a proposal to the board for an ordinance that would provide tax relief to parents or spouses of military service members killed in action. This ordinance for Tax Relief for Gold Star Parents and Spouses would follow (almost word for word) a state statute passed in 2017, C.G.S. § 12-81.

Under this ordinance, the maximum amount the Town could exempt from property tax is $20,000, applied to the assessed value of the parent’s or spouse’s property. It would also permit the town to set the income limitation amount at up to $25,000 above the maximum income amount set in C.G.S. § 12-81l.

[Editor’s note:  during the meeting officials were unclear what that maximum amount was. After the conclusion of the meeting, Vanderslice emailed media with the current maximum income amount, which is approximately $36,000. Accordingly, “with the additional $25,000 we propose to add (the greatest amount the state statute allows), the qualifying income limit would be $61,000,” she wrote.]

Vanderslice told the other selectmen that she had hoped to be able to apply the exemption retroactively; however, she was advised by town counsel that under the current statute, the spouse or parent would have to file for the exemption before Oct. 1 of the grand list year for which the exemption was being sought. “It cannot go in effect any earlier than the Oct. 1, 2019 grand list, which would be FY 2021. So that’s unfortunate if we decide to go ahead, but it also means that we need this to move along, because the applications need to be received before Oct. 1, 2019.”

There are two possible ways the town can pass a new ordinance–either the Board of Selectmen vote on whether to adopt it, or it must be decided by a Town Meeting. Vanderslice said ordinances that have a wider impact are typically brought before a Town Meeting, while proposed ordinances that are more administrative in nature are considered by the BOS only. Because this Gold Star tax exemption ordinance would not have significant impact on the annual budget, Vanderslice suggested the BOS take it up.

To do so, the BOS would set a public hearing to get input from residents before voting on whether to approve. The BOS members voted Monday evening to hold that public hearing on Monday, Aug. 12.

At the moment Vanderslice is only aware of one family that this ordinance would apply to, although she said, “We’ll put it out there, you never know who might have moved here that we’re not aware of.”