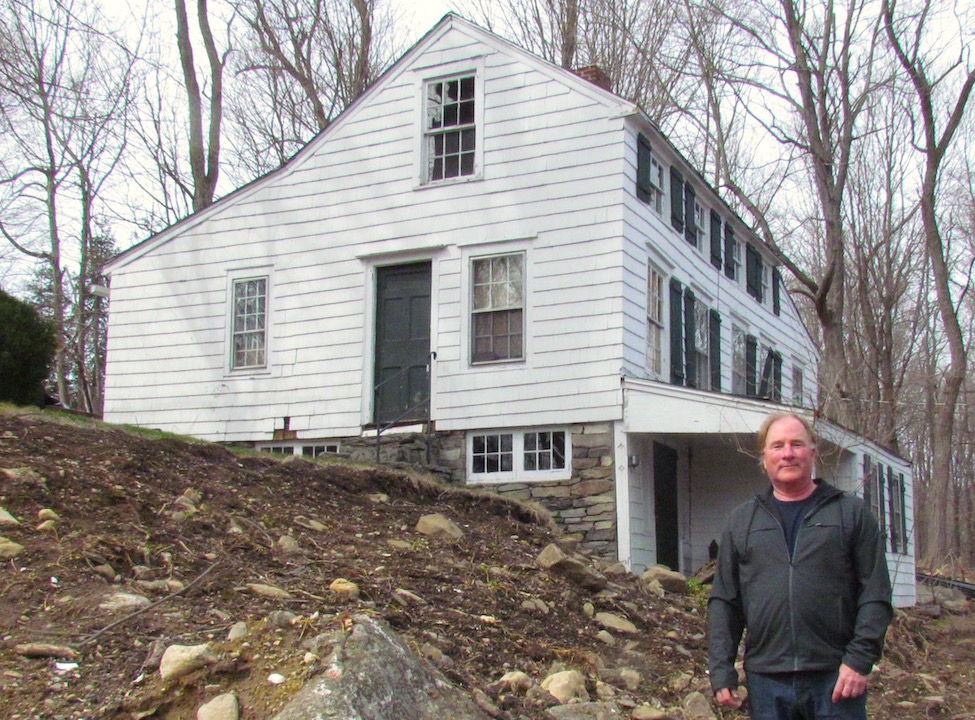 After one 90-day delay that temporarily halted demolition, a historic house at 211 Hurlbutt St. is being readied for teardown. One Wilton builder has stepped forward and offered to salvage elements from the building to reuse in a structure he hopes to build elsewhere in Wilton. But first he has to obtain a variance from the town for the lot where he intends to build—and overcome objections the neighbors there have.

Peter Gaboriault, who owns Bear Paw Builders, stepped up to salvage portions of the structure at 211 Hurlbutt St. for several reasons:  he wants to use parts of the antique house to build a home on another lot in Wilton, and because he has a longstanding love of historical properties. Not only does he live in a house that dates back to the early 1800s but he is also on the board of the Wilton Historical Society and serves as an alternate on the Historic District Commission.

The home is officially recognized as the Jackson-Nealy House, and is listed on the 1989 Wilton Architectural Survey. It was built in 1730 and is one of Wilton’s oldest homes. It was home to a Wilton first selectman, Andrew Jackson, whose family built the house, and whose son also became first selectman and owned the house as well.

“It’s definitely a significant house. As far as the Historic District Commission goes, if it’s on that survey, then for us it’s important,” he says says.

The fact that historic buildings in Wilton are important to Gaboriault, a man who makes his living building new homes, might be something  people might find surprising. But he has committed to never build a new property that would require tearing down a historic one. “I’ve never taken down an old house, and I won’t take down an old house. That’s my own personal rule. There are too many other possibilities for lots that you don’t have to take down a historic house.”

It’s a belief he’s held a long time, and part of why he is involved with the Historical Society and the Historic District Commission. Gaboriault has lived in Wilton for 51 years and according to the ZBA application, grew up not far from the Hurlbutt St. house.

“It sets the character of Wilton having these old houses scattered around. Every one we lose is irreplaceable. It’s not coming back. We have to try to stem the tide and keep as many as we can.”

He notes that moving a house entirely or rehabbing it on the existing property sometimes isn’t an option.

“It’s not always possible to buy the house in place. For instance on the Hurlbutt property, they had already decided they were going to build a new house, and they only came to the Historic District Commission when they were getting their permits. They were long past the point of us trying to be able to buy it. But the owners did cooperate, we got a deal done where they would let me take it down after the variance hearing.”

For this house, he plans on salvaging the windows and the timber frame, parts of the house that are historic. (Ed. note:  other portions of the house aren’t as old, and were renovated in the 1920s, 50s and 80s.)

“Houses built in the 18th century were all built using timber frame. In this case there’s some pretty old windows, they were handmade and have weighted glass. We can keep the windows and we can reconstruct the frame at the new site and build around it.” He would use the frame and build onto it as well.

It’s not an inexpensive project, by any means. “It’s not a ‘win’ in that sense,” says Peter, who says he’s doing it both out of his love of historical buildings, and that it’s a nice confluence with what he does for a living. “It’s always something I’ve wanted to do, and it’s kind of the perfect timing. I have a little lot and a little house. Maybe this could work.”

The Hurdles:  Obtaining a Variance and Neighbor Objections

The site where Gaboriault wants to locate the house is on a small, quarter-acre lot across the street from his own home on Honey Hill Rd.. His plan is to build a small, 2-bedroom house there, as the lot is approved for a septic system of that size and for the well. The architect he’s working with, Kevin Quinlan, is well-known in Wilton for his work with historic buildings.

None of Gaboriault’s plans will come to fruition, however, unless the town’s Zoning Board of Appeals grants his project a variance. They’re scheduled to hear the application at their meeting next Monday, March 21.

The lot is located in a 2-acre zone, though, and zoning regulations require that the setbacks from the property lines for a house there be 50-ft. in the front and 50-ft. in the back. However, the lot itself is only 70-ft. deep. “So the setbacks overlap. As it sits now, without a variance, you can’t build anything. In order to build just an outhouse, I’d still need a variance.”

The house Gaboriault would like to build would sit directly across the street from his own antique house, and would somewhat mirror the positioning close to the road that his house has now. “Is it going to be closer to the road than the regs require? It would have to be because the lot’s so small.”

If ZBA grants the variance, Gaboriault says he can move quickly to salvage the elements from 211 Hurlbutt St., which would benefit the builders there as well, where the new house is well underway. “I’m ready to do it. I just have to store it while I get my permits. It wouldn’t be long.”

The other obstacle to getting the project to work, says Gaboriault, is that the neighbors on either side of the lot don’t approve of the plan. “They’re against this,” he says. “They don’t want to see anything there.”

Town planner Bob Nerney confirms that he has received calls from people objecting to the project. There are no letters or written correspondence opposing the plan in the file, so nothing is part of the official record; however he has noted opposition from “several” people.

Gaboriault says he is willing to do whatever it takes to make his neighbors happier.

“I’m willing to do anything they’d like to screen it or fence it, or anything that would make it more attractive to them.”

Wilton recently has seen its share of divided opinions over the issue of historic preservation and character of the town. A group of citizens created a petition to protest the demolition of the historic home at 183 Ridgefield Rd., and other residents pushed the Historic Districts and Historic Properties Commission for the 90-day demolition stays on both that property as well as the house at 211 Hurlbutt St..

Leslie Nolan, the executive director of the Wilton Historical Society, wrote a letter to the ZBA on behalf of Gaboriault, and it is part of the case file.

Noting that because the WHS is unable financially able to take over the preservation and care of historic Wilton structures, having private individuals step in and save threatened buildings is “the only alternative.” In her letter of support, she writes, “I have no knowledge of the specific legalities of the application, but I do know that, as a community, we must do everything we can to preserve our town history.”

The chair of the Historic District & Historic Property Commission, Colleen Fawcett, wrote a similar letter backing Gaboriault to the ZBA, pledging support to “enlightened citizens” who work to preserve Wilton’s “dwindling stock of treasures—the historic homes that give our town the special character valued by many.”

Noting how difficult is often is for her committee to find purchasers who will retain, remove, or save historic properties, and how expensive a proposition it is for those individuals, she adds that, “The town must look for ways to accommodate the unusual circumstances that can often surround efforts to rescue and reuse antique structures.”

She appeals to the ZBA on behalf of the Commission:  “The Wilton Historic District Commission respectfully urges the Zoning Board of Appeals to ‘think preservation’ and creatively when considering the dilemmas facing people who are trying to save Wilton’s history.”

Town planner Nerney couldn’t comment on the specifics or merits of the application because it’s an open application in front of ZBA. He says that while there have been several preservation efforts in the past involving relocating historic structures, he’s not aware of any variances having been granted to make those efforts possible, and so he doesn’t believe there is a precedent for what Gaboriault is asking for.

He added that many of the older historic homes in town are located right up against a street, like Gaboriault’s planned project. “It’s because they predate zoning; they were built back in an era where the word ‘zoning’ didn’t even exist. They were put up close to the road which was more like a cowpath [then].” However, when zoning relief and variances are granted for those antique homes, it’s typically on properties where the house is staying put, “as opposed to being relocated on a remote parcel.”

Given that Gaboriault’s project might accomplish both growing the grand list and preserving a piece of history, Gaboriault is hoping that the ZBA will grant his variance application.

“I hope that we can be a little flexible, given the situation,” Gaboriault says.

The story was updated to include information about the non-historic portions of the house at 211 Hurlbutt St..