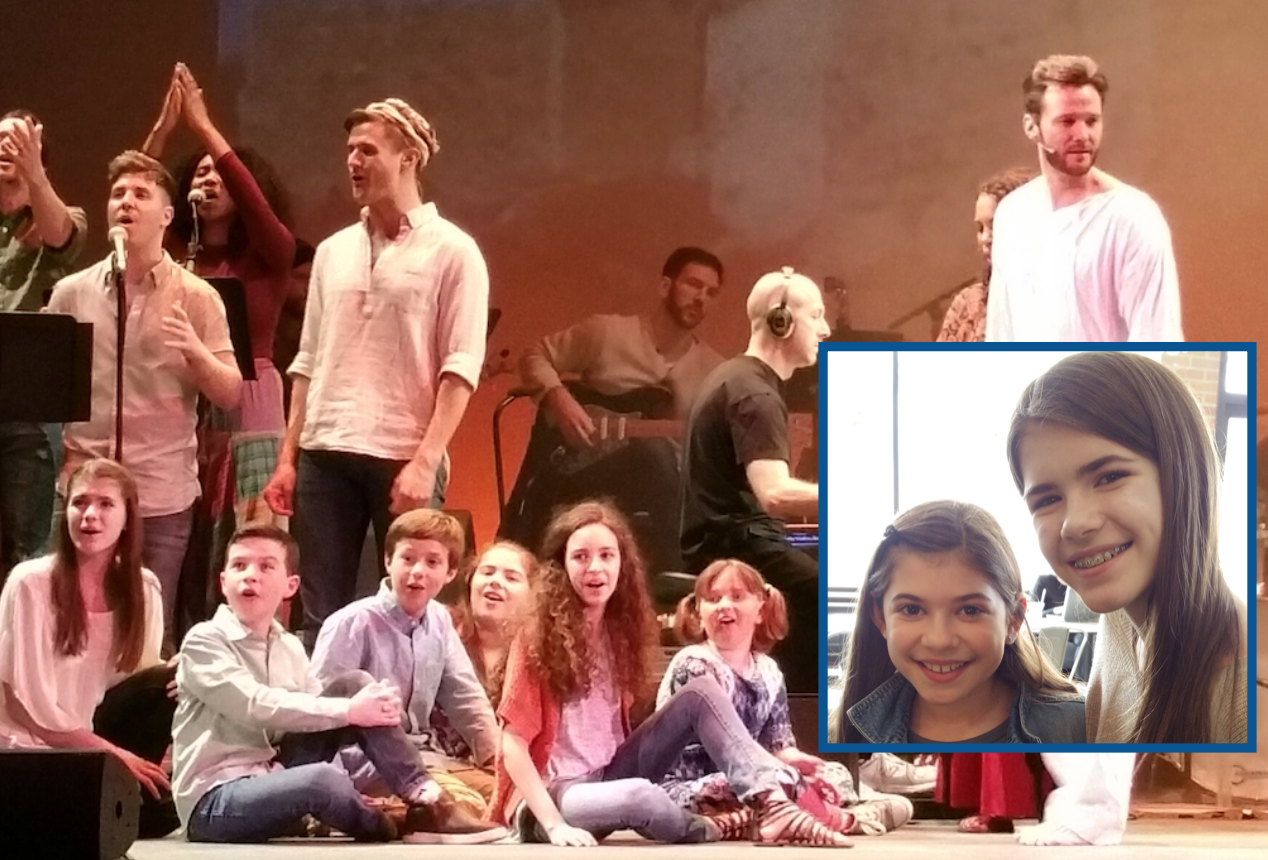 The star power on the stage at a recent production of Jesus Christ Superstar at The Ridgefield Playhouse was unmistakable, with current Broadway performers making up the main cast. For two Wilton families, however, all eyes were on the ensemble–specifically, on Middlebrook students Daniella Sallese, 12, and Sarah Bates, 13, two of the nearly 80 children who auditioned for a role in the production.

“When we produced the rock opera Tommy for the Playhouse in 2016 we needed a child for the lead role, a young boy between 8- and 12-years-old. I thought it was a fantastic opportunity to bring in a local child actor,” he says. “We held open auditions at the Playhouse and the turnout was fantastic. What I learned through that experience was that Fairfield County is a hotbed for young talent.”

Levine says the number of talented kids he saw at auditions for Tommy inspired him to use more than just one child actor in the show, so he created roles for 15 of them. He says the result was a huge success.

“Not only did the addition of kids benefit the production—bringing a brand new element to the musical—it also got the community really excited about giving local children the opportunity to work with Broadway professionals.”

One of those children was Daniella, who returned this year to audition at the Playhouse again, this time for a role in Levine’s production of Jesus Christ Superstar.

“I was more nervous this time,” the 7th grader says. “Tommy was my first show audition ever and I didn’t know any better so I didn’t know enough to be nervous!”

Once she made the Jesus Christ Superstar cast, however, Daniella says she knew exactly what to expect—a lot of fun.

“The Broadway actors are very nice. They and Daniel taught us great tricks,” she says. “Like, pretend the curtain is a wall. If you walk into it, you’ll crash!”

For Sarah, an 8th grader with her eye on a career in theater, interacting with the professionals was a huge bonus of being in the cast.

“Even though we were separated for the most part, they’d talk to us and teach us from their experience,” she says, adding some of the interaction was pure fun. “We’d be backstage singing Broadway songs and they would join in.”

Levine says bringing Broadway pros and local child actors together is a big part of the success of shows like Tommy and Jesus Christ Superstar.

“I don’t know of any other communities that do what we are doing in Ridgefield, bringing incredible Broadway talent from New York City to star in our shows alongside local talent and a children’s ensemble. It’s pretty spectacular!”

Levine has quite a bit of his own star power, having appeared on Broadway and in national tours of Mamma Mia!, Little Shop of Horrors, The Rocky Horror Show, Jesus Christ Superstar, Chicago, Les Miserables, and Tommy, for which he was nominated as Best Actor in a Musical. Levine’s husband, Bryan Perri, handled music direction for Jesus Christ Superstar at the Playhouse, taking time off from his full-time job as music director and conductor of the Broadway production of Wicked.

With such professionals leading the way, the children in the Jesus Christ Superstar ensemble knew they had to get right down to business.

“They knew right up front, they had to be disciplined. They were told—it’s work, so be ready to work,” says Lisa Sallese, Daniella’s mother. “When I picked her up from their first combined rehearsal and she said they had run through the whole show, blocked it out, everything, I couldn’t believe it.”

Levine says he made it very clear that he had high expectations of the kids from day one, and that they were being given an opportunity that many kids their age don’t have. They definitely got the message.

“All the kids arrived off book knowing their music, understanding the musical, and respecting the level of talent that was around them. It made for a really exciting rehearsal process,” he says. “My Broadway cast was blown away at the level of maturity and talent by these local kids.”

When the curtain rose on two sold-out performances of Jesus Christ Superstar, both Sarah and Daniella said all of their hard work paid off tenfold.

“It’s so exciting! There’s all this energy in the room, and the audience is so into it,” Daniella says.

Sarah agrees, adding, “You get a rush of adrenaline on the stage—everyone does. Then you all just feed off each other’s energy.”

Levine says he looks forward to making these stage productions an annual event. In fact, Joseph and the Amazing Technicolor Dreamboat is already scheduled for the Playhouse’s 2017-2018 season on Feb. 24 and 25, 2018, and tickets go on sale at the end of this month. No doubt Sarah and Daniella will be ready to jump when the auditions are announced.