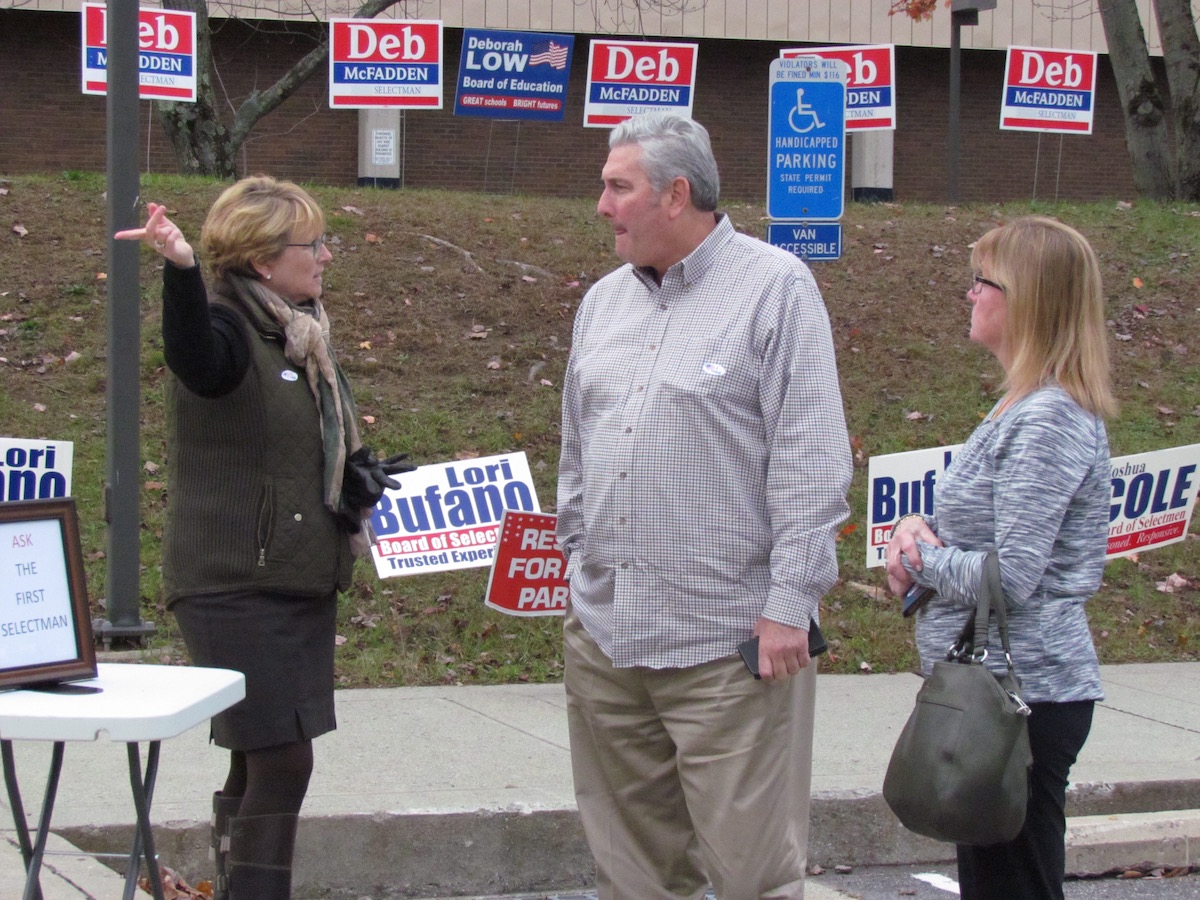 Following Election Day results and the news-heavy campaign cycle, GOOD Morning Wilton asked to sit down and discuss events with First Selectwoman Lynne Vanderslice. We asked for her thoughts about the tone of the campaigns, the issues that emerged and how the town moves forward.

GMW:  Election 2017 was a very active election cycle–there were more contested races than usual, Wilton residents were very engaged with the candidates and issues during the campaigns, and Election Day turnout was high.

Lynne Vanderslice:  Absolutely. I stood outside of the polls with my “Ask the First Selectman” sign from about 9:30 a.m. until just about 8 p.m.. I did that for the Town Meeting last May, because I saw it as a great opportunity to talk with as many residents as possible. Where else do you get so many people in one location. So I did it again with this election.

I heard from a number of people that they voted to send a message, based on how they voted, or by not exercising all of their votes.

I spoke with people who were Democrats, unaffiliated and Republicans. Republicans asked me to take a message back to the Republican Town Committee although that message should already be obvious to them. There is an ideological divide in the Republican party, and the voters rejected one side of that divide. That was clear in the Board of Education results, where 36% of the eligible votes were not cast. And it was clear in the Board of Selectmen results where there was a candidate with the same ideology. The divide also played out in the nomination process for BOS endorsements. The RTC did not endorse its then-chair. The results indicate the RTC was right, as they chose candidates which were more reflective of the greater Wilton population. I fought hard for those RTC endorsed candidates, Lori Bufano and Josh Cole, because like me, they represent the other side of the divide.

One question is, ‘How is the RTC going to address this?’ The bigger question is, ‘How are Wilton Republicans going to address this. Membership on the RTC is open to every Republican, but you need to be elected. Elections are this January. If you want to help shape the direction, run for a seat. I plan to. If you don’t like their processes, you can change it from the inside.

I encourage people to get involved. Both political parties have tremendous responsibility and authority because under state law, they control most of the candidates that are put up on the ballot. If you think they’re putting up the wrong candidates, you need to get involved, participate in the committee, get yourself onto the committee to make sure the type of candidate you think is appropriate is put on the ballot.

I’ve never been a member of any town committee. But I plan on running for a position in the RTC in January because I do want to have a voice on the candidates that go onto the ballot.

GMW:  I’m aware a number of people contacted you before the election, and asked you what you felt about Andrea Preston’s posts that came to light. You never made an endorsement in that race to begin with but can you say what you thought about the controversy that eventually developed?

LV:  What I told people who wrote to me was that I was deeply troubled by recent events in Wilton, and the degradation of the quality and civility of discourse amongst residents on social media.

I certainly take issue with the sentiments and the tone in that candidate’s posts. I’m strongly committed to doing what I can as First Selectman to combat these disturbing trends. I did not comment publicly at the time as I honestly believed if I did so it would have increased the divisiveness–that is the opposite of what I hope to achieve as first selectman.

GMW:  So how do you or heal Wilton’s wounds, or repair the divide–not just the political or ideological one, but with everything that’s happened recently?

LV:  There are multiple aspects of that. As far as the political divide, I’ve never belonged to a town committee because I never wanted to separate myself from other residents. I now understand about ballot access so I now understand it’s necessary to do that.

My friends are unaffiliated, Republican, Democrats–I never think of political ideology when I think about my friends or the hundreds of volunteers I’ve worked with in this community. It’s important to have the town committees to insure ballot access and all the other authority that the state empowers them with, but it’s important not to get so lost in that separation that you view the other party members as your enemy. We are one community, and we have to constantly remember we’re one community with all same goals and be neighborly to each other, even if we don’t agree with each other’s views, we should at least be able to work together.

There are several ways that we can work to improve the community. A number of us are gathering on Nov. 13 to talk about those ways. Some of the ideas I plan to bring are more community-wide activities, like the bonfire on Nov. 17, the summer concerts we had and the Halloween walk.

Another is to have community conversations. People need to talk to each other face to face. Facebook has eliminated a lot of the face to face conversations that used to go on in this town. Although it’s a great resource for providing information–I used it during the most recent storm to provide updates, that was a powerful tool for me–but it’s not proving to be a good place to have discussions, particularly on sensitive or controversial topics. I think it would be more productive for people to be in a room talking to each other face to face.

I would hope we can return to a time when more of our interactions were in person. I encourage residents to come out and join in the events and conversations.

LV:  Our laws are based on the idea that everybody is in a party. Wilton has more unaffiliated voters than Republican voters or Democratic voters–that puts those unaffiliated voters at a disadvantage in terms of getting on the ballot, funding a municipal campaign. They have to build their own network of supporters.

You certainly can do it, as we saw Dave Clune do it. I’m glad every day that Dave Clune did that. I don’t think there’s anybody in this town that doesn’t think Dave Clune is an outstanding selectman. He puts in a tremendous amount of hours, and he’s been an asset on the Board.

LV:  Dave Clune is a very recognizable person in town, in a positive way. He grew up in town, he’s raising his family in town, his wife is very active in the community, and of course his parents are extremely well known. Dave was well known.

Al Alper is also extremely well known, but I think he didn’t get elected and I think most people know the reasons why he didn’t.

If you take someone like Melissa Rotini, she had no historical name recognition. She was extremely well-qualified; in my opinion, she did extremely well in the debates. But it’s difficult–she’s the stereotypical unaffiliated candidate who has to work really hard to get their name out there. She was appointed to the Planning & Zoning Commission by the P&Z members, so they recognized her qualifications. But for other voters, if you’re not known it’s difficult to get the information across to the voters.

My message to Melissa Rotini would be to not go away. To continue to be engaged in town government and look for other opportunities to allow the public to get to know you, and then run again.

If somebody has an idea of a particular board they’re interested in, even if there isn’t an opening at this time, they can contact my assistant Jackie Rochester and we’ll keep their name on file for when positions come open and let them know. If people have questions about boards and commissions, they’re welcome to contact me or contact the chair of that commission. All of these members have Town of Wilton ‘wiltonct.org’ email addresses.

GMW:  With the Dec. 1 swearing in and transitioning to a new term of office, does that mean that there will be board and committee positions opening up?

LV:  Yes. Most positions in town have a term ending date of Nov. 30, so there are a number of them that will opening as of this Dec. 1. We expect by next week to have the list of all of the openings, and that will be up on the town website.