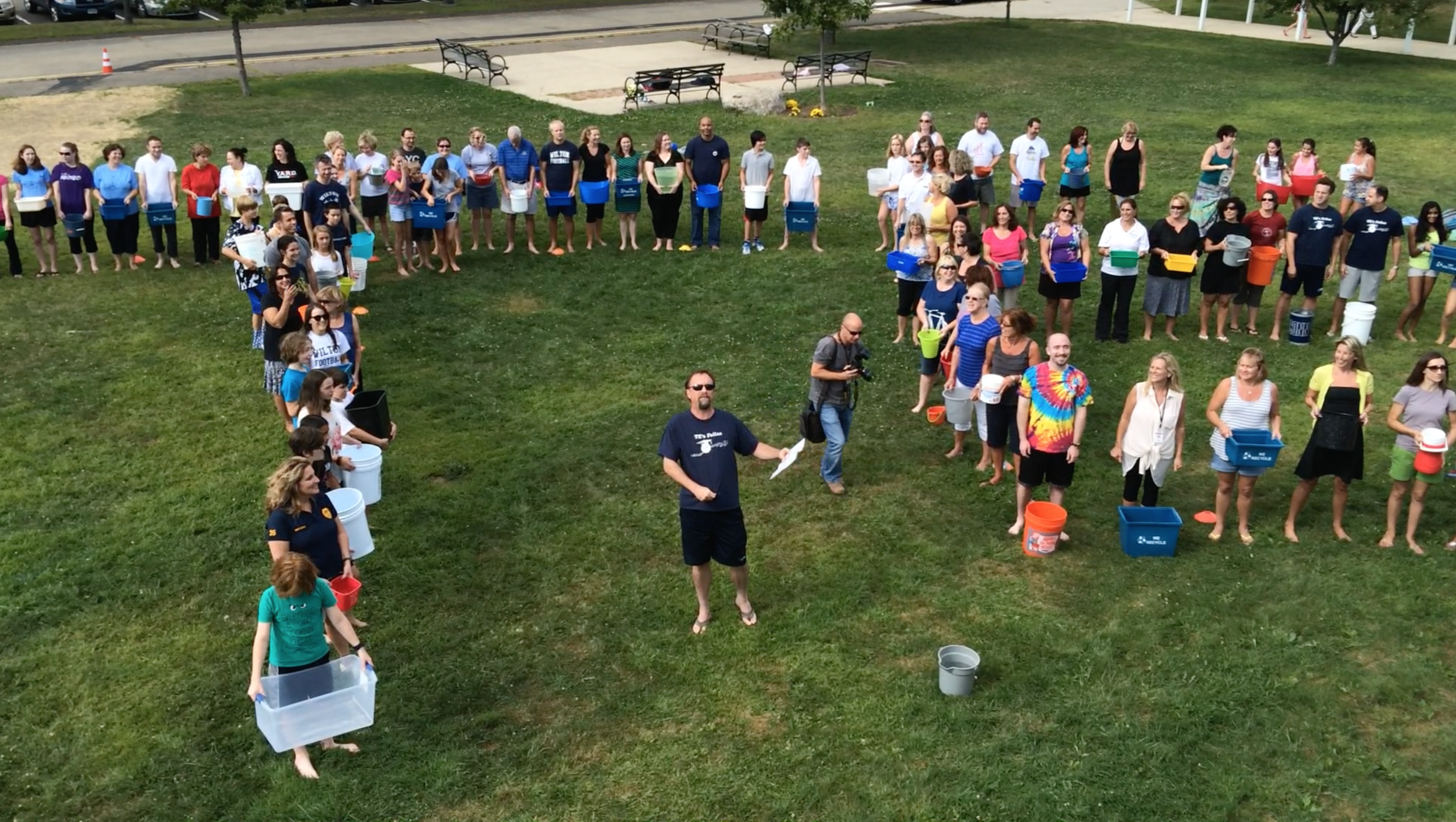 Middlebrook School turned up the heat on the Wilton Public Schools‘ ice bucket challenge series yesterday, Thursday Aug. 28, when they answered the nomination of Cider Mill School to participate in the ALS Association viral fundraising effort. Now global in effort, ALSA.org has raised more than $94.3 million as of Wednesday.

But the Middlebrook effort took things up a notch in every direction, from having the Wilton Fire Department on hand to help out with the soaking part of the challenge, to adding the element of heart and personal purpose.

The school dedicated their effort to former teacher Tom “T.E.” Everett, a 40-year Middlebrook vet who taught social studies there and became a much beloved figure in Wilton. Everett was diagnosed with ALS almost 8 years ago. He has a devoted network of Wilton friends and former co-workers who still make sure they surround him with love and assistance at his home in upstate New York whenever possible. They also created a fundraising team called “T.E.’s Fellas and Ladies” to walk ever year in ALSA’s Annual Walk to Defeat ALS, that will be taking part again this year in Westport on October 26.

The team is hoping they inspire people to donate to their walk effort, which benefits ALSA.org and their ALS research and awareness efforts along with the general donations that the ice bucket challenge has been bringing in to the non-profit. [Click here to learn more about the team and donate to help them reach their fundraising goal.]

Everett’s good friend, Jory Higgins, was the lead motivator and energizer behind the Middlebrook ice bucket challenge effort. He said that he knew Tom was going to love seeing the school community–or family–take part in the challenge.

“I’ll quote Tom from an email he sent us; he said, ‘It really warms our hearts to see you all dump a bucket of ice over your heads!'” Higgins laughs at the pun. “The fact that it’s putting a smile on his face, that he’s forgetting what he’s going through, even for 30 seconds, he gets a kick out of it. If nothing else…”

As a teacher, Higgins also sees how incredible it is to get the students to connect to the power of coming together for a cause, especially one that has personal meaning to the school.

“When I was filling their buckets, I kept telling them, ‘Thank you for doing this, thank you for being here for Tom,’ and I kept telling them the story of Tom Everett. It keeps his memory alive and personalizes the disease that doesn’t otherwise have a name. That this is my brother, my friend, our teacher. We talk a lot about how Middlebrook is our school, and maybe it brings home that it’s our teacher even if you didn’t have him, even if he retired in 2000. It brings it home, it’s not just some disease to them anymore,” Higgins said.

Moreover, he explained, they get to see that they can do something to have an impact.

Middlebrook challenged Wilton High School and the Wilton Fire Department, in a hat-tip to Wilton’s Bravest for taking part yesterday.

Fire chief Ronald Kanterman said he and his team were ready as soon as they got the call (as they always are). They were happy to have the fire truck spray down the crowd, and he didn’t mind getting caught in the ice water part of the action himself. [SPOILER ALERT:  Watch ALL the way to the end of our video clip.]

“Firefighters get wet for a living, I’ve been getting wet my whole life,” Kanterman joked. But he was thrilled to help make the Middlebrook effort come together in the spectacular way that it did.

“I got an email from Dean Higgins that said, ‘You think you could?’ and before he could even get it out, I said, ‘What time, what day!’ The Fire Department, we feel very close to the community, and especially a little bigger when it’s for charity. If they wanted us to come here on a hot day and wet down the kids, we’d do that too, but when it’s charity, and a national movement, we couldn’t pass it up. And we’re thrilled we were here,” he said.