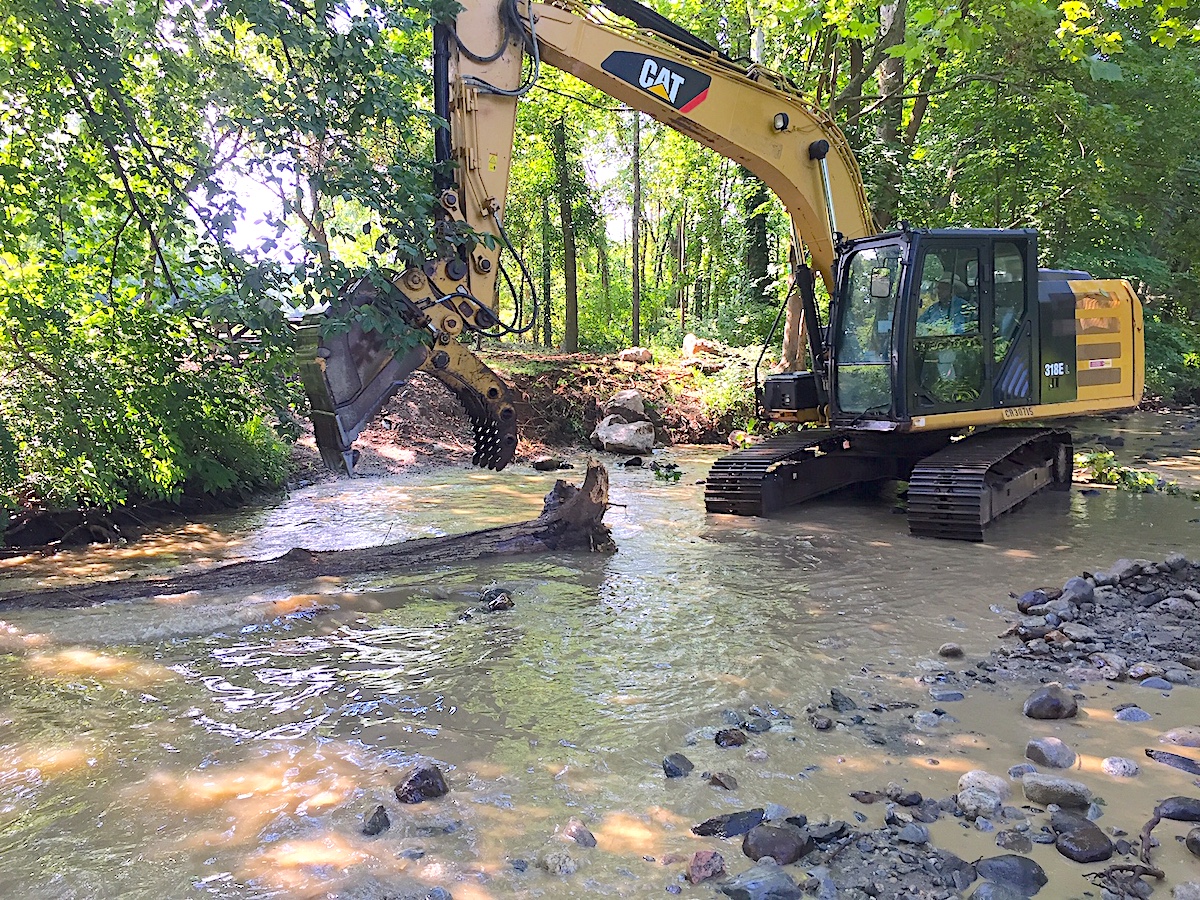 What’s that excavator doing in the Norwalk River?

That’s a question some Wilton residents may be asking right now as they pass through Wilton Center. A glance over at the Norwalk River as it winds through town near Schenck’s Island reveals some heavy duty machinery at work moving large boulders and digging into the river banks and river bed.

The Mianus Chapter of Trout Unlimited, in partnership with the Town of Wilton, Wilton Land Conservation Trust, and Connecticut Department of Energy and Environmental Protection (CT-DEEP) is working on a habitat enhancement project along a half-mile stretch of the Norwalk River at Schenck’s Island Open Space this month.

The project goal is to enhance the conditions of the location by creating a narrower and deeper river channel, improving the variety of habitats for fish and insects. The heavy equipment is being used to excavate the stream bed, build channel features and place boulders, all of which will improve the stream bed stability. Large trees and their root balls are being installed into the riverbank to prevent future erosion and increase bank stabilization.

Trout Unlimited began planning and fundraising for this project over two years ago. They have retained Troutscapes River Restoration out of Bozeman, MT to design the project plans and execute the construction work. According to Trout Unlimited’s conservation chair Jeff Yates, this company has a proven track record of completing successful river enhancement projects across the United States.

Trout Unlimited secured permits for the work not only through the town’s Inland Wetlands Commission but also with CT DEEP and the US Army Corps of Engineers.

According to Yates, there’s a limited time window to complete the work, as the group doesn’t want to impact spawning and the fish life cycles. Changes last year to a section upriver–a dam removal–changed the portion of the river closer to Merwin Meadows, making it now a sea run fishery, and keeping that window very narrow.

The project includes building 20 different deeper pools in the river, while also creating other shallow areas by narrowing the river path, providing an improved habitat for spawning and rearing. Deeper pools allow fish to survive the heat of the summer in deeper, while shallow riffles allow better spawning.

Yates explains that these areas have changed and disappeared over centuries–historical development when trees were cut down 300 years ago with the regional move to agriculture; then later industrial changes, as sewage and pollution were introduced into the waterway; even later residential impact, from parking lots and other man-made factors; and more recently climate change, as frequent, heavier rains have altered the ecosystem. All of those factors have combined to create more flashy river system–as heavy rains fall in quick bursts, the rain runs off all of the developed spaces and flash floods the rivers. This contributes to significant erosion, widening the stream channel and depositing sand on the river bottom which instead should be clean gravel and cobblestone with more gaps.

“This is what we’re trying to restore, at least a half-mile of a good mix of features that aquatic life needs,” Yates explains. “At the end of the day, while we’re focused on trout, these changes benefit all fish and it also includes improving the life of the aquatic insects, the bottom of the food chain,” he says.

Something else that was done this year in the river to help restore it was that about 80 adult lampreys were reintroduced to the river between Cannondale and Dana Dams. Environmental experts hope that the lampreys will spawn, and the young will migrate to the Sound–and return next summer to the place they were born to repeat the cycle–for the first time in 200 years.

The behavior is connected to trout health as well–Yates explains that the lampreys bring nutrients from the ocean back into the fresh water, as well as stir up the gravel in the river bed, which help the trout not have to work so hard to spawn. “There are all these little connections,” he says.

People can see the lamprey–they grow to about two- to three feet long, and look like eels with a much thicker body. They may be more visible in the area of the Wilton Family YMCA and on the NRVT and are most active when they’re spawning in the early morning and late evening hours.

Completing the work is expensive–in the range of $100,000 per project, with three other half-mile sections planned after the stretch along Schenck’s Island is completed. Trout Unlimited welcomes donations via its website, and volunteers–contact Yates for more information.

The work is scheduled to begin during the last few weeks of August and is expected to last approximately 10 days. Portions of Schenck’s Island will be closed to the public during the work, but the trails away from the work zone will remain open for public use.

Town and Trout Unlimited officials are excited about what the changes will do to improve the resource, as the  Norwalk River continues to take a prominent role in Wilton’s present and future. Yates reminds everyone that the objective of the 10-14 days of construction followed by careful, thoughtful planting, is to build a half mile of “excellent habitat that models what the river should look like.” 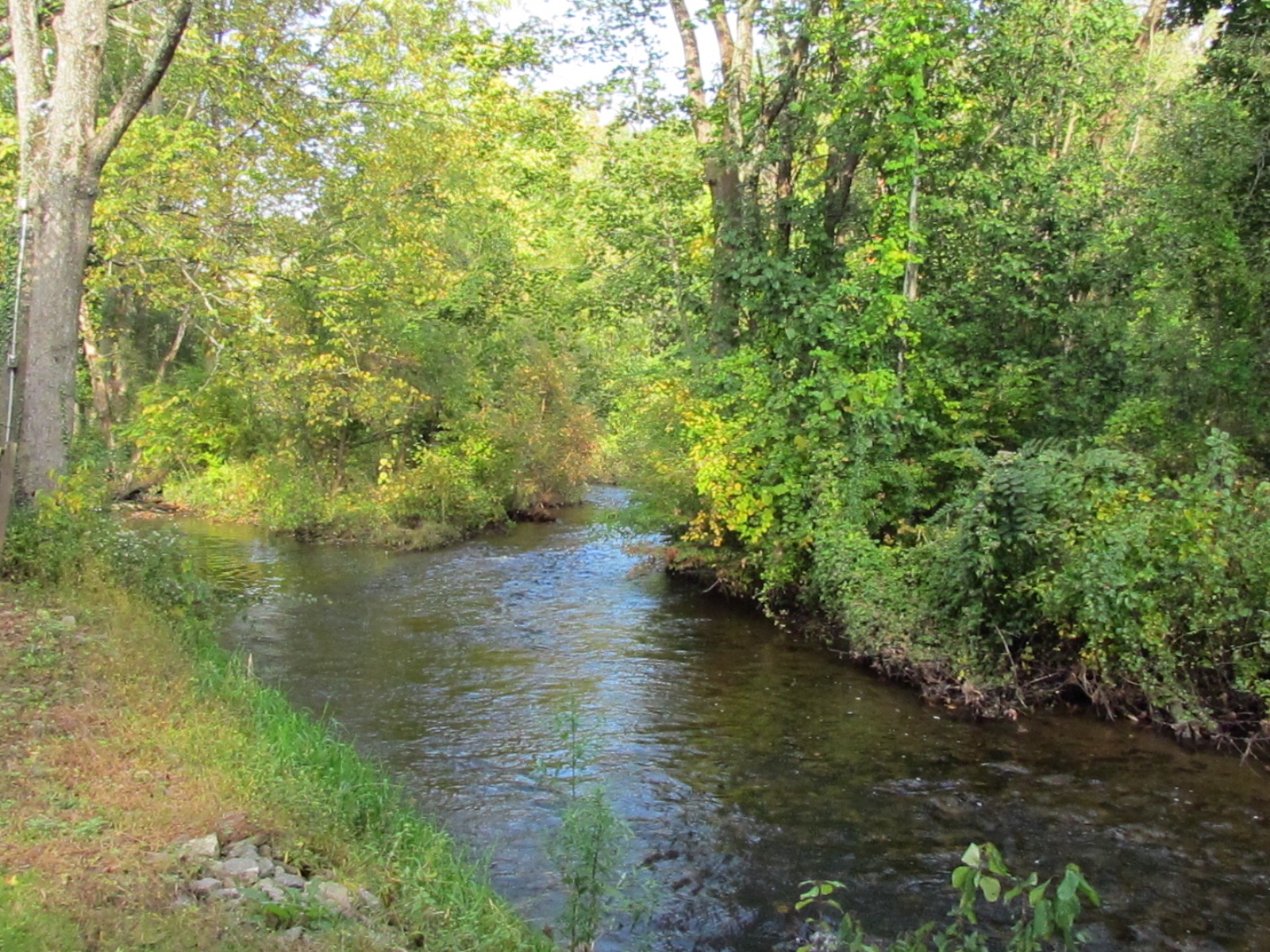