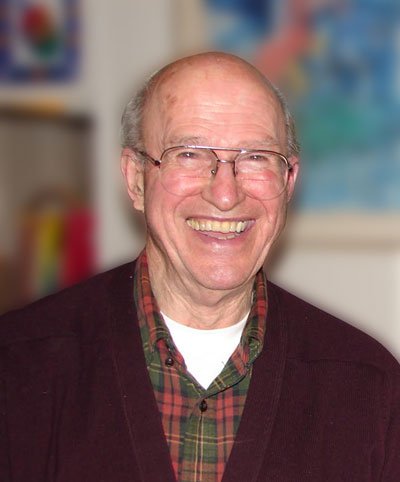 Walter was born in Stamford, Conn., on Dec. 21, 1922, the fourth of six children of Emily Slawson and Roswell Truman Smith, a builder. With roots in the Town of Wilton dating back to the mid-18th Century, Walter and his siblings were regular Sunday visitors to their grandparents, aunts and uncles on Nod Hill Rd. throughout their childhoods, and could vividly recall a sleepy town of one-room schoolhouses and working farms.

World War II cut short Walter’s studies at Dakota Wesleyan University, but not before he met the girl of his dreams there:  Daisy Ahern of Mitchell, S.D. For nearly three years, they corresponded while he saw action in the Pacific as a proud member of the amphibious 594th Engineer Boat & Shore Regiment.

Walter and Daisy married on Jan. 27, 1946, settling in Wilton immediately thereafter. Taking up the trade he had learned from his father, Walter built their house on Forest Ln. It was the first of a dozen homes he would construct in that neighborhood — a neighborhood in which, decades hence, he and Daisy would be happily surrounded by nearly all of their grown children and growing grandchildren.

As the proprietor of W.R.T. Smith Builders, Walter was responsible for the new construction and historical renovation of hundreds of local residential, commercial, institutional and civic projects. Among the many Wilton landmarks bearing the stamp of his craftsmanship (either as builder or through renovation) are the Village Market, Wilton Congregational Church, Old Town Hall, Ambler Farm, Covenant Church, the Chase Bank, the ABC (A Better Chance) House, the Commonfund Building and Wilton Library.

In 1970, as contractor for the Town of Wilton, he built Merwin Meadows Park, dredging the pond and constructing the bathhouse. He was also an active member of the building committees for Wilton High School, Middlebrook and Miller schools.

Throughout Fairfield County, this plainspoken tradesman became the choice of leading designers to build and renovate fine custom homes, classic barns and estates for their discriminating clients. He built two houses in New Canaan designed by the noted architect Alan Gelbin, a protégé of Frank Lloyd Wright. In Weston he constructed a major addition to a pavilion house by famed modernist Mies van der Rohe. A state-of-the-art show house he built in Greenwich for the Copper Institute of America was featured in House and Garden.

For all his accomplishments, Walter became best known for the work he loved best: melding his expertise as a master builder/preservationist with his untiring commitment to community service. Chief among the organizations benefiting from his leadership was the Wilton Historical Society, which he first joined in 1948, going on to become its three-term Board President and, ultimately, Trustee Emeritus. Over the years he was in large part responsible for the organization’s “rescue” and adaptive reuse of 17 historically significant Wilton buildings. He moved and painstakingly restored many of the antique structures that today comprise the Historical Society’s headquarters on Danbury Rd. and also at the Lambert Corners site. In 2005, he managed the development of Cannon Corners, moving and renovating a cluster of historic buildings that today stand at the foot of Olmstead Hill Rd..

On permanent exhibit in the Society’s Abbott Barn are approximately 600 antique tools donated by Walter, most of them made in or around Wilton. He took great pleasure in demonstrating their use and giving lively talks about local history to visiting groups of schoolchildren who had never before seen a butter-churn or blacksmith’s anvil. The artifacts in the “Tools of the Trades” exhibition were culled from his world-class collection of more than 4,000 tools used by dozens of trades and crafts in the 19th and early 20th Centuries.

He was an avid participant in two tool-collecting organizations, ATTIC (Antique Tools & Trades in Connecticut) and EAIA (Early American Industries Association). He and Daisy regularly traveled throughout New England, and even to Great Britain and Germany, to attend meetings and auctions.

Their church — Wilton Congregational — was another town institution of which Walter remained a mainstay for decades. In 1959 he built the church’s pipe-organ structure and its Religious Education building (now Children’s Day School). That same year, he reinforced the internal structure of the church’s steeple; about a dozen years later, with the aid of an apprentice, he scaffolded and climbed the steeple and personally re-shingled it.

Walter was instrumental in the formation and growth of the New Samaritan Corporation, a nonprofit organization dedicated to creating affordable housing for the elderly, founded in 1970 by his close friend the Rev. Arthur E. Higgins, former pastor of Wilton Congregational Church. Through the decades the organization has developed more than 2,400 units throughout CT, MA and RI. He was also chairman of the board of Wilton’s own Ogden House for a number of years.

He remained active in a variety of projects until the time of his death, including serving as the president and superintendent of Wilton’s historic Bald Hill Cemetery, where his grandfather, great-grandfather and great-great-grandfather are laid to rest.

For all his life he remained unbending in integrity, endlessly curious and unfailingly generous. Big of heart and hands, big of stature and smile, Walter will forever be remembered by the many to whom he provided shelter, guidance and love, especially his family.

He is also survived by three of his siblings: Madeline Kaloides of Urbandale, IA; Dr. Theodore Smith of Mexico; and Winifred (Nels) Bjarke of Tacoma, WA, as well as numerous nieces and nephews and their children. All were taken by Walter’s trademark ebullience and Daisy’s graciousness at the many family reunions and 50-years-worth of Thanksgiving feasts the couple hosted in the beautiful 19th-Century barn attached to their home.

He was predeceased by two sisters, Eleanor O’Connell of Lyme, CT., and Harriet Barker of NH; a daughter-in-law, Lillian Tanner Smith of Wilton, and an infant grandson, Jonathan Smith.

A celebration of the life of Walter R.T. Smith will commence on Friday, March 6, with calling hours at the Wilton Historical Society (224 Danbury Rd.) from 4 to 8 p.m. A memorial service will be held the next day, Saturday, March 7, at the Wilton Congregational Church, 70 Ridgefield Rd., beginning at 1 p.m., followed by a reception at the church.

A private burial will take place in Bald Hill Cemetery in the spring.