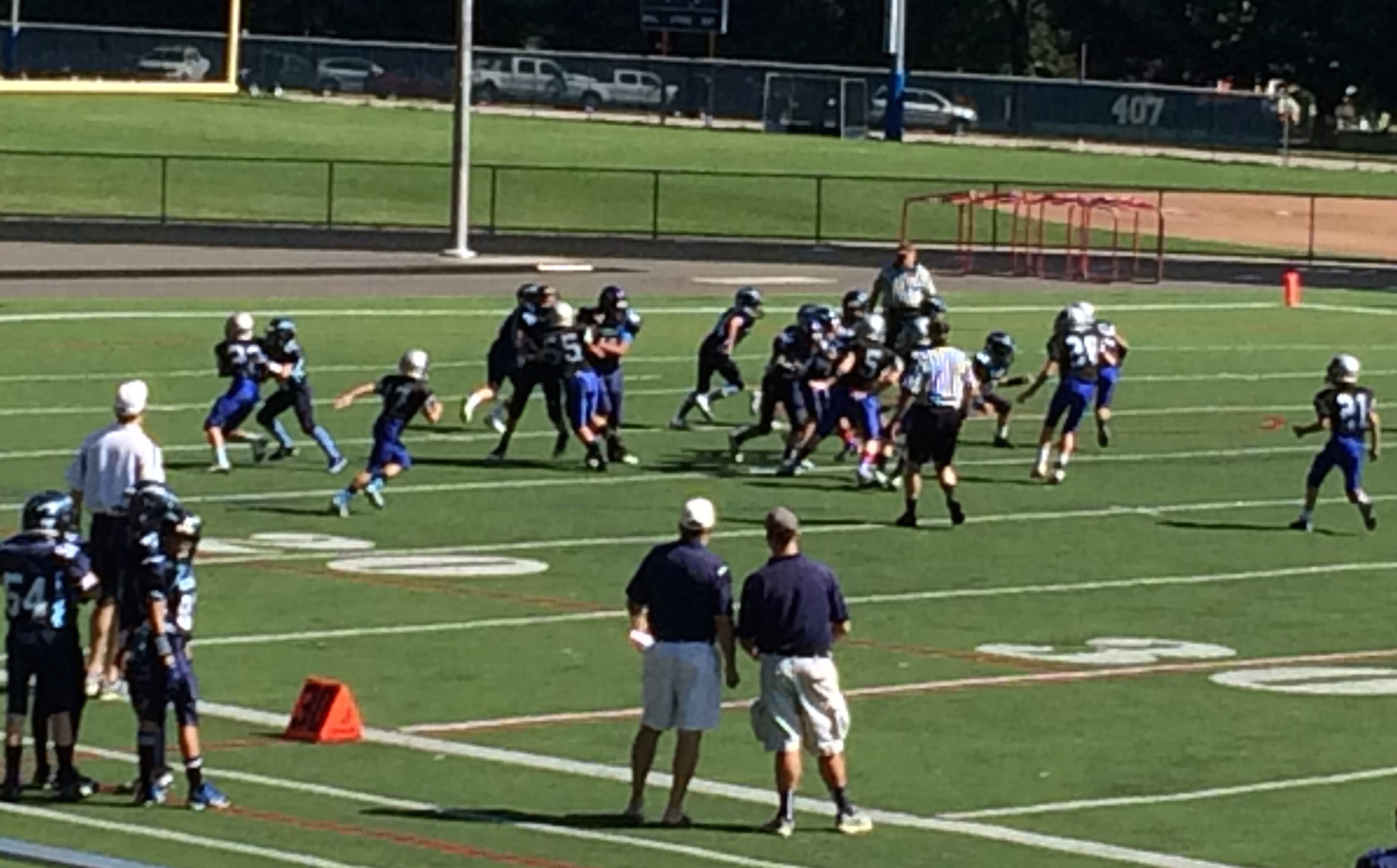 Visiting Fairfield was treated rudely on the first play from scrimmage when Matt Dooley’s vicious hit forced a fumble, recovered by Austin Andersen at the Fairfield 34.

The Wildcats made some progress on their second possession, but a sack by Herve and a combined sack by Bargon and O’Brien forced a punt which pinned Wilton at their own seven.

Unperturbed by the difficult field position, Hyzy, Dooley and Healey took turns running the ball upfield as Wilton’s offensive line continued to dominate. The ten play, 93 yard touchdown drive was capped off when Herve leapt high over a Fairfield defender to haul in Hyzy’s fade pass in the corner of the end zone for a 12-0 advantage.

Tackles for loss by Savarese and Andersen forced another punt, allowing the Warrior offense to embark on another impressive drive, this time 12 plays for 79 yards. Cole Stephenson, O’Brien and Andersen this time moved the pigskin on the ground for the Warriors. On 4th and goal at the 13 with time waning in the half, Hyzy again connected with Herve to send the Warriors to the locker room up 18-0.

The Wildcats had no more success in the second half than they did in the first. On their first possession of the half Polito set up Wilton’s fourth score by intercepting an errant Fairfield pass at the 44. Three plays later Dooley broke multiple tackles on his way to a 33 yard score and a 24-0 lead.

Lenz, Dominick Caratazzolo, Savarese and Michael Gamboa all made stellar defensive plays in the second half as the Warriors hard-hitting, swarming defense prevented the Wildcats from advancing any further than the Warrior 36 yard line, preserving the shutout.

The sixth grade Wilton White football team jumped out to an early 21-0 lead then coasted to a 34-16 victory over Westport North in the 2014 FCFL season opener on Sunday in Westport.

After a punt on Wilton’s first series as the Warriors worked out cobwebs from the long off season, Wilton’s defense, apparently unaffected by the long layoff, set the tone for the game. Matt Gulbin and Connor Healey combined on a tackle for a six yard loss on the Wreckers’ first play from scrimmage. On third and long the defensive line of Jimmy McKiernan, Henry Sell, Healey, Christian Theoharides, Gulbin and Everett Andersen gang tackled the Westport runner to force a punt giving the Warriors great field position at the Wreckers 46.

One play later, Blake Pagano-Walley took a pitch from Sean Sullivan and rumbled 45 yards for Wilton’s first score. Ryan van Heyst booted the point after for a 7-0 lead.

After Gulbin made another tackle for loss on Westport’s second offensive series, Theoharides recovered a fumble at the Wreckers’ 21. Wilton’s offensive front of Pierce Bazewicz, Neil Satsangi, Jack Carroll, Davis Cote, Gulbin, Theoharides and Will Jarvie then paved the way, culminating in Pagano-Walley’s second touchdown on a seven yard run. Again the point after was good making the score 14-0.

Consecutive tackles for loss by Andersen and Gulbin forced yet another punt and on the next play a long touchdown run by Sullivan pushed the score to 21-0 early in the second quarter.

The Wreckers managed to score on their first possession of the second half to close the gap to 21-8.

Midway through the third quarter on the first play after a Wilton fumble, Cote intercepted a Westport pass and returned the ball to the Wreckers’ 48. One play later the score was 28-8 after Sullivan broke off another long run through a hole opened by Evan Kauh and Gulbin, followed by van Heyst’s fourth successful PAT.

Westport and Wilton traded touchdowns in the fourth quarter as Sullivan scored on his third long run of the day to make the final 34-16.